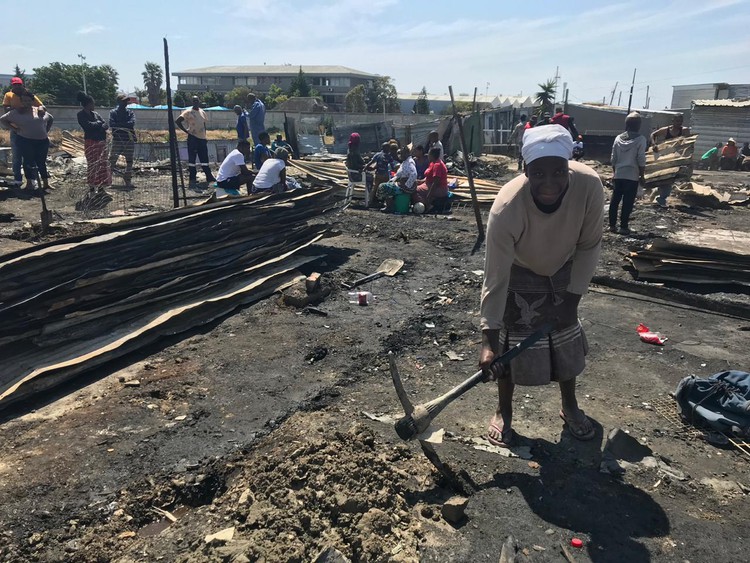 Dunoon resident Lulama Goniwe clears the charred remains of her home. It was among 42 shacks that burnt down in the informal settlement along the Transnet Freight Railway line in Dunoon near Milnerton on Monday night. Photo: Peter Luhanga

Dunoon resident Lulama Goniwe spent most of Tuesday clearing the charred remains of her home. It was among 42 shacks that burnt down in the informal settlement along the Transnet Freight Railway line in Dunoon near Milnerton on Monday night.

City of Cape Town Disaster Risk Management spokesperson Charlotte Powell said, “The blaze destroyed 42 structures leaving 139 people affected. No emergency sheltering was activated. Residents are staying with family and friends. SASSA has been informed to provide humanitarian assistance. City departments are on the scene and assisting the affected community.”

While clearing the debris on Tuesday, Goniwe, who lived with her six children, said, “We don’t have clothes. We don’t have food. We don’t have a place to stay. My children’s school uniforms and books went up in flames. I am confused. We are even hungry now.”

Some residents blame the lack of access to water in the area for the mass damage caused by the rapidly spreading fire. Part of land where the informal settlement is located, belongs to Transnet.

Goniwe also complained that there were no toilets, so people have to relieve themselves in the bushes across the railway line. This despite the settlement having been established in 2002, she said.

Another resident, Yoliswa Cezula, who lives with her two adult children and two grandchildren, said her shack had five rooms, three of which she rented out.

She lost all of her household belongings including her ID. She said that when she heard people screaming, she stormed out of her home and also helped by screaming to wake up more residents.

Malusi Booi, Mayco Member for Human Settlements, has previously said the informal settlement is not on City-owned land and it cannot provide services without permission.

“The continued unlawful occupation of the remainder of the rail reserve is derailing all plans from the City and Transnet to find a solution in terms of the ongoing legal process. The number of occupants is ever increasing, meaning that we are working with a moving target,” he said.

Booi said that there were a number of newly established communities demanding services but that the City was currently unable to assist them. “Existing recognised informal settlements are prioritised on the basis of available resources, which are not limitless. The City is clear in its communication that unlawful occupiers regrettably do so at own risk,” he said.

Next:  Immigrant shop-owners in Durban fear for their lives after attacks

Previous:  Families live in shacks on a railway line after housing project abandoned