Families vacate land at owner’s request, only to be moved off new land too 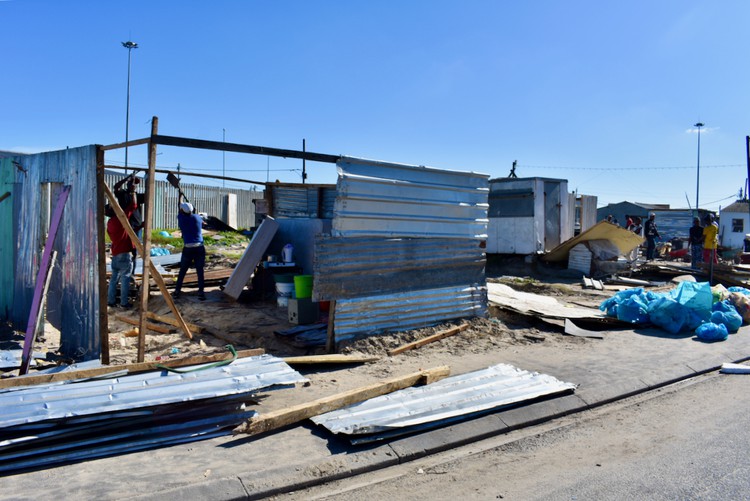 About five of the 13 families left homeless by demoliitions on Monday in Driftsands tried to rebuild their shacks. Photo: Buziwe Nocuze

About 100 residents from Driftsands in Cape Town burnt tyres and blocked Old Fourie Road after their shacks were demolished on Monday and their building materials confiscated by the City.

The 13 families had built new shacks after moving from private land they had occupied for about seven years elsewhere in Driftsands. They had accepted that the landowner wanted her property back and they had moved.

Lindelwa Mbambani-Mahlombe, a community leader, said the owner had told the families to leave by 24 June. “She wants them gone because she wants to use her space,” she said. The landowner did not respond to GroundUp’s questions.

The committee had given alternative space to the families, Mbambani-Mahlombe said, and had not expected that the City would confiscate their building materials after demolishing the shacks.

Sinaye Mekuto, who was left homeless, said, “We do not have money to buy other building material. We are single parents and struggling to make ends meet.” She said they had lost some of their belongings in the demolitions.

Nosipho Mpumlo said they reported the matter to their ward councillor but “he cannot assist us because he doesn’t own any piece of land”.

Ward 114 Councillor Themba Honono (ANC) confirmed this. He said, “They told me that they want a place to build and I told them that I don’t have land … I don’t have a right to give people the land.”

Mayoral Committee Member for Human Settlements Malusi Booi said, “City officials do warn people who are attempting to invade land that it is not allowed and that materials will be confiscated if it is removed to prevent an illegal land occupation.”

“The City condemns land invasions on both private and City-owned property because these actions are illegal and consequently impact on service delivery to other residents.”

Booi said individuals can contact the Anti-Land Invasion Unit’s 24-hour hotline on 0215961999 for more information about making an appointment for collecting their materials.

Next:  “Commuters have to urinate in the open,” says PE taxi driver

Previous:  Protest in Hout Bay over payment for lobster rights