“Flood victims now shit in buckets inside their shacks and empty them into the dam. I do the same.” 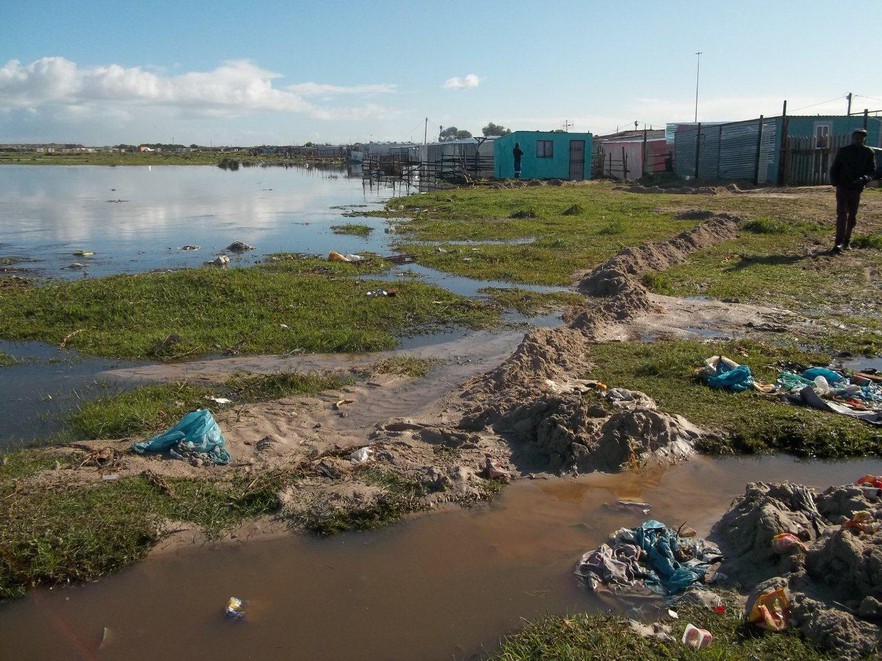 The flooded area in the photo is a field that the residents of Burundi informal settlement in Mfuleni use as a toilet. Photo: Vincent Lali

Hundreds of households in Mfuleni, Cape Town have no nearby place to relieve themselves. This comes after heavy rains turned a vacant piece of land used for defecation by the residents of Burundi informal settlement into a dam.

The heavy rains caused a nearby canal to overflow, flooding the vacant land and nearby shacks.

Community leader Masikholwe Madyongolo said the shack dwellers have been defecating on the land since 2004.

“You can’t walk or squat to relieve yourself on the land because it is covered in water,” Madyongolo said. He said the shack dwellers use the land as their toilet because public toilets are blocked and located far from their shacks. They also have to stand in queues before they defecate at the community toilets. “Residents avoid the toilets and use the land because they fear catching coronavirus when they are standing in a line.”

Shacks near the canal have also been flooded. Residents have left their flooded shacks and slept at relatives, acquaintances and friends, Madyongolo said. “When they return in the mornings, they find their shacks burgled and their belongings stolen.”

Community leader Nonceba Ntshanka said some people are still staying in their flooded shacks because they have nowhere else to go. “Flood victims now shit in buckets inside their shacks and empty them into the dam. I do the same,” she said.

Ntshanka wants the City of Cape Town to move the residents to a drier area. She said the water normally takes weeks to recede.

Nokubonga Bhovungane said she now makes her four children defecate in a bucket since the land is covered in water. “The floods have given me additional work as I have to empty the buckets and clean them after my kids use them,” she said. “I must bear with the smell while they defecate inside the shack.”

She struggles to get water to clean the buckets because paths to the communal taps have become swampy and muddy.

Baxolele Nqevu whose home is flooded said, “My wife wades through the water and makes food for me and my kids. We sit on bed while we eat because the shack is flooded.”

Nqevu has placed his bed onto crates. “We can’t go and stay elsewhere because we have no money to hire trucks and pay rent,” he said. The water has drenched his furniture and belongings. 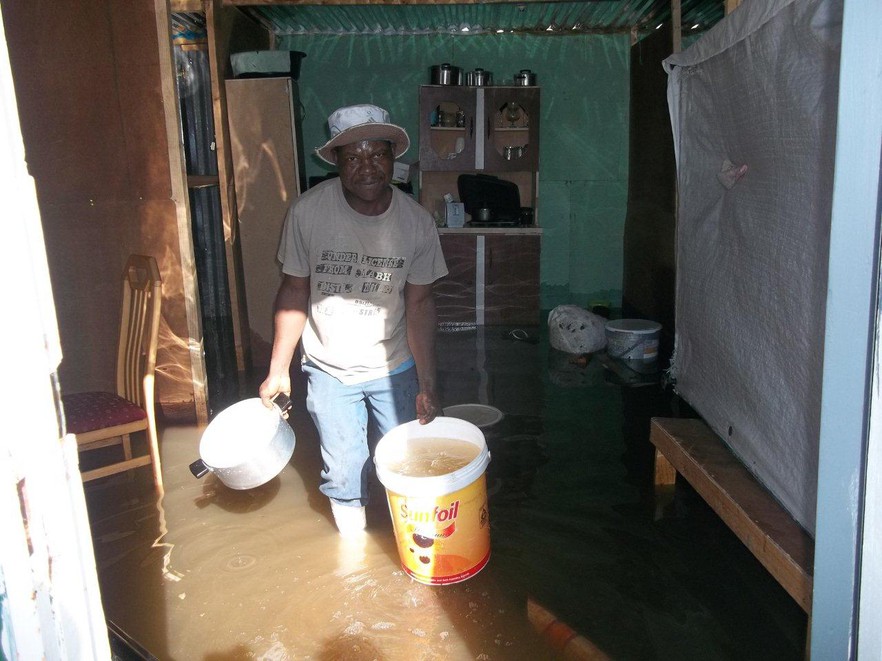 Erick Nyathi tries to empty the water out of his shack. Photo: Vincent Lali 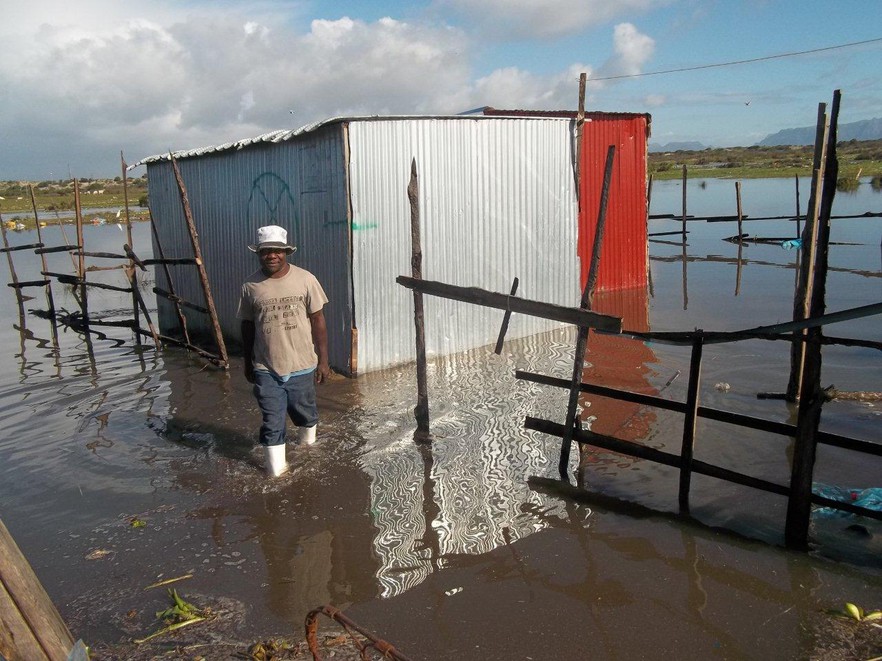 This photo shows how deep the water is around Nyathi’s home. Photo: Vincent Lali

Lumka Zibi, who stays with three children and her husband Erick Nyathi, said her flooded shack is cold. “I scoop the water out with a bucket, but I don’t see where I can throw it because there is water everywhere,” she said.

The floods drenched her furniture, blankets and clothes. “I put my blankets on the line to dry, but the rain returns and forces me to remove them while they are still wet.”

Avuziwe Mpiti said she stays with her one-month–old daughter in a wet shack. The baby has a cough. “I can’t wash my baby here because she would be exposed to cold if I undressed her in this ice-cold shack.”

Mpiti strengthened her floor with cement and bricks in January to prevent water from filtering through. “The water coming from outside has caused the cement to crack. Now my shack is full of water,” she said. 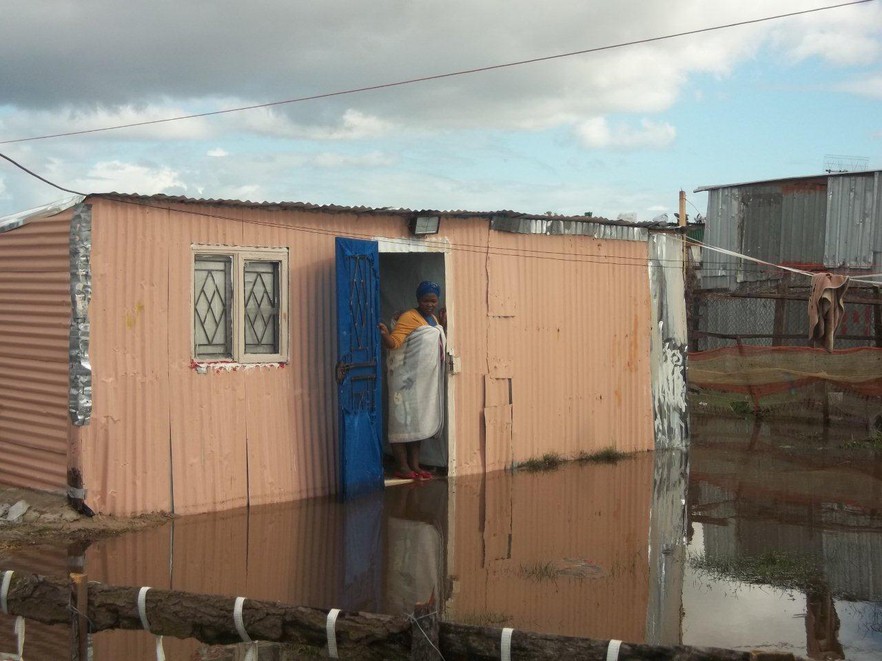 Avuziwe Mpiti stands with her one-year-old child on her back at the entrance to her shack. Photo: Vincent Lali

Next:  Overcrowded Bobani Village will soon get toilets