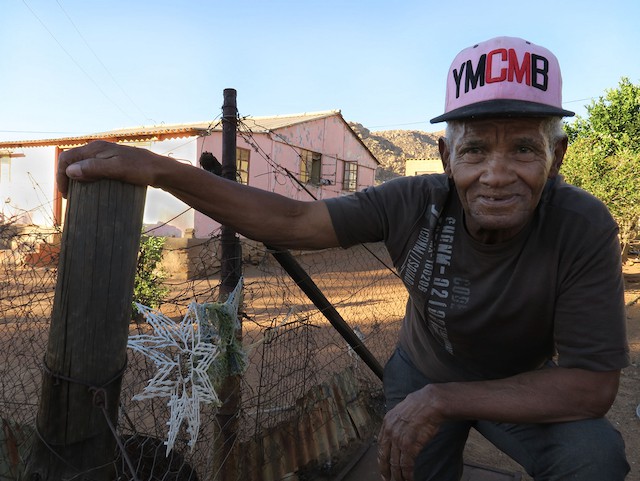 Johannes Meyer lives a stone’s throw away from a watercourse polluted by effluent from the Nababeep waste water treatment works. He says the stream has been heavily polluted by sewage for at least a decade. Photos: Steve Kretzmann

A permanent stream runs through the desert from Nababeep northwards towards the Orange River. It is a river of unadulterated sewage that remains as black water for at least three kilometres. Its source: the town sewage works under management of the Nama Khoi Municipality.

With little to dilute it (the region receives 167mm of rain per year) the stream remains visibly polluted and continues to stink for at least 3.5km downstream of the sewage works before the valley turns west to eventually join the Skaaprivier.

Johannes Meyer, who has lived nearby since 1985, said while it has always been a channel for effluent from the sewage works, the water used to look clean, which would still be the case if the waste water was properly treated. It has been in its current state since he retired from working at a nearby copper mine in 2010.

According to the National Department of Water and Sanitation Integrated Regulatory System dashboard, the last analysis of effluent from Nababeep’s waste water treatment works dated 6 April completely failed to comply with minimum standards. The plant obtained 0% for microbiological and operational compliance.

In an attempt to locate ward councillor Gillian Peters (ANC), a municipal worker who had just finished repairing a water leak, said, “If you find her take a photograph so we can see what she looks like.”

Peters was not at the municipal offices in Nababeep and did not answer the cellphone number provided by officials. 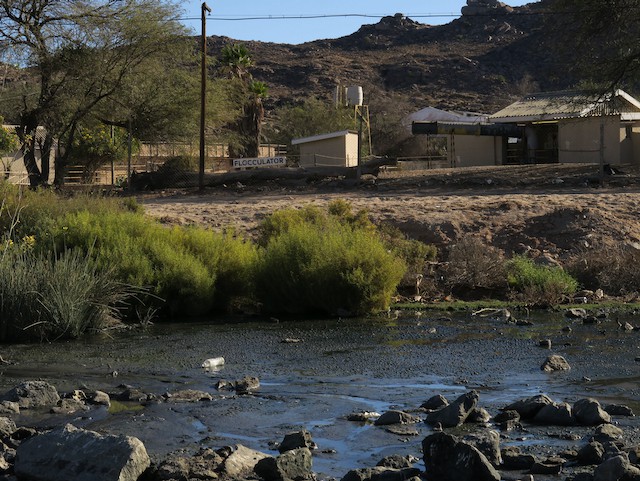 Raw sewage flows as effluent from the Nababeep waste water treatment works despite R11.5m reportedly being spent on upgrades during the last financial year. The sewage creates a stream that pollutes a watercourse for kilometres as it flows through the desert environment.

Sanitation failure is not confined to Nababeep. According to the dashboard, with the exception of the town of Steinkopf, all eight sewage treatment plants operated by the Nama Khoi municipality consistently, and significantly, failed to meet minimum standards during 2020, and continue to do so.

Springbok is the seat of the Nama Khoi Municipality. At its landfill, illegal dumping of everything from household refuse to builders rubble lines the gravel road to the dump site made up of terraces against one of the rocky hills. There was no supervision when GroundUp visited and smoke billowed from the site. 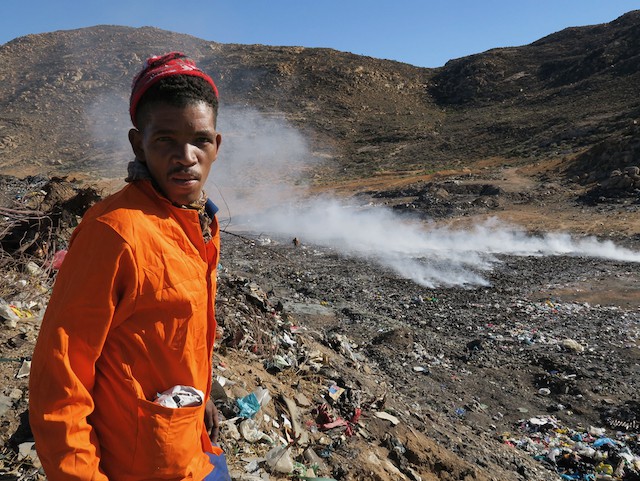 Antonie Brandt was among a group of wastepickers at the Springbok landfill. He said municipal workers regularly set the refuse alight, but it worked in his favour as the carbon added weight to the glass and metal he collected and sold for recycling.

Rachel Malubila was walking to the dump site with her daughter-in-law and two granddaughters. Malubila, carrying a bag of recovered magazines and papers, said they were looking for reading material as the town’s library had been closed since the first Covid-19 lockdown in April 2020. (A visit to the library confirmed this.)

She said on days when the municipal garbage trucks trundled to the site after collecting refuse in town, children scavenge for discarded food.

The roads in Springbok are potholed or worn away to gravel, but the municipality is spending over R10 million of a municipal infrastructure grant to pave the Phillip Soudens Street in Bergsig, the apartheid-planned township of Springbok. 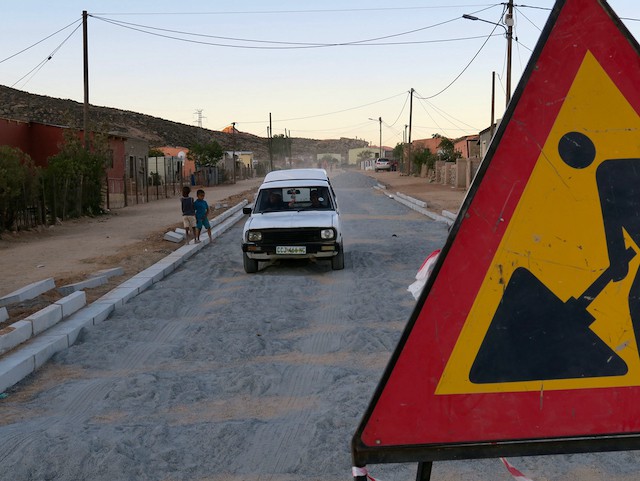 Potholes and degraded roads are everywhere in Springbok and its surrounds. The only visible improvemet being undertaken is the paving of Phillip Soudens Street in Springbok’s apartheid-planned township of Bergsig. R10.1million is being spent on paving the road over three financial years.

The mayor of the deeply dysfunctional Nama Khoi municipality is Riaan Cloete of the ANC. The ANC has a plurality of seats (but less than 50%), followed by the DA, EFF and Khoisan Revolution.

The municipality has received a qualified audit from the Auditor-General (AG) every year since 2016.

The AG said “reasonable steps” to prevent irregular expenditure “were not taken” and the report is damning on the municipality’s failure to adhere to the Municipal Finance Management Act and supply chain regulations, often a red flag for corrupt activity. This non-compliance was the main cause of R205 million in irregular expenditure. It may have been more than this as the full extent could not be determined.

The AG found the municipality did not take reasonable steps to prevent R11.9 million in fruitless and wasteful expenditure, most of which was caused by failing to pay suppliers within 30 days.

The AG was unable to verify the R333.4 million the municipality stated it received from “trade payables”, such as the provision of electricity and water. There was no adequate system for accurate billing and not even sufficient evidence to prove its basic wages and allowances bill was correct. There were numerous other qualifiers.

The AG said the municipality relies on government grants and subsidies to provide the services it is responsible for, and “a material uncertainty exists that may cast significant doubt on the municipality’s ability to continue as a going concern”.

Attempts to obtain comment from the municipality on these and other matters received no response. 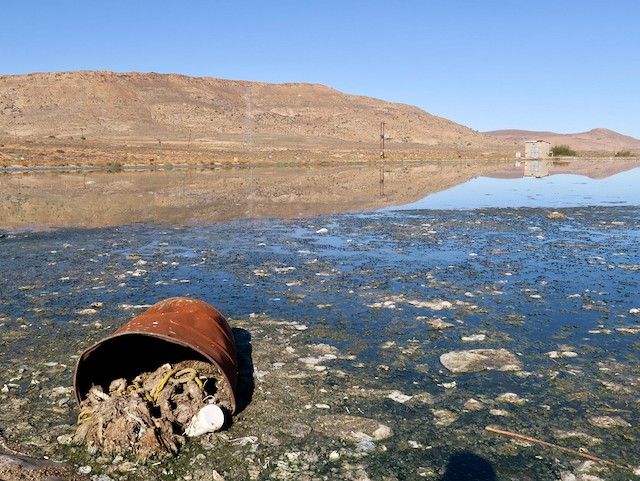 GroundUp found the Springbok waste water treatment works open and unattended, and the facility obviously not functioning to required standards.

The AG Consolidated General Report on the local government audit outcomes of the 2018/19 financial year notes that the Nama Khoi Municipality was “marred by political instability during 2018/19 due to the inability of the two coalition parties governing the municipality to work together”. This led to the municipal public accounts committee, which is responsible for accounts and consequence management oversight, being ineffective.

The report goes on to say the committee members received training but “these individuals struggle to apply their knowledge in practice” and investigations into irregular expenditure – as required by the Municipal Finance Management Act – were not performed.

Back in 2011, the ANC accused the DA/COPE coalition of corruption relating to R18 million missing from housing projects in the 2011/12 financial year. A forensic report at the behest of the provincial government implicated a former municipal manager, Aubrey Baartman. Co-operative governance MEC Alvin Botes said criminal charges would be laid against implicated officials.

COPE entered with a 16% in 2011. The ID merged with the DA, giving it a fragile sway over council with a coalition.

If the ANC’s losses and DA’s slow gains continue, this election could see the power cross to the DA. However, if GOOD is in the running, and given the voters’ 2006 swing to De Lille, it might be the DA’s Achilles’ heel. 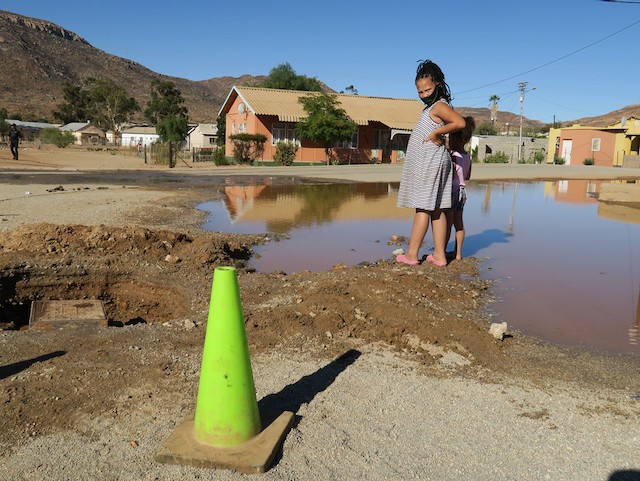 Children observe a pool of water in arid Nababeep after a leak was just repaired by municipal workers.

Next:  Dr Tumi, the Lottery and the alleged fraud of R1.5 million

Our health in brief - part three: What we spend on health