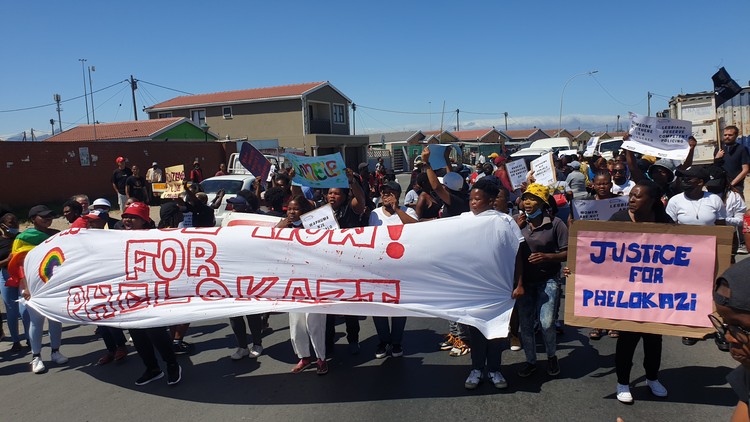 Mqathanya, who lived in Site C, was stabbed to death in May last year. A suspect was arrested, but the court case was postponed four times before being withdrawn on 14 December because the docket never made it to court.

The group staged protests and met with the police in the area in a bid to expedite her case but to no avail.

In March we reported on how Free Gender, supported by other organisations and the Mqathanya’ family, marched to the Khayelitsha police station to raise awareness about Mqathanya’s case and to demand better treatment of cases involving members of the LGBTIQ+ community.

During the march, Mqathanya’s sister, Phumeza Ndlwana, said the family was having a difficult time finding closure because her sister’s case was being handled poorly by the investigating officer.

In a letter sent on 8 April to Station Commander Brigadier MA Magobiyane, Free Gender and the Mqathanya family said they remain sceptical of the way in which the South African Police Service (SAPS) dealt with matters involving the community.

“Free Gender and our allies such as Equal Education, the Social Justice Coalition and others have had many promises made by SAPS provincial, cluster and station leaders in the past. The people of Khayelitsha remain unconvinced about the skills, qualifications, competence, openness, efficiency, effectiveness and professional ethics of the police and prosecution services,” read the letter.

The group said that the relationship between SAPS and the Khayelitsha community is “at an all time low” and that access to justice for black lesbians and people of Khayelitsha was “elusive”.

Free Gender’s Happiness Gutshwa said they were told that Mqathanya’s case would be back in court on 5 May and that the investigating officer had been replaced pending an internal investigation into how the case was handled.

Among their demands, the organisation asked for the perpetrator to be convicted and sentenced appropriately; for professional police work specifically responding to the special needs of black lesbians and other vulnerable people; ensuring that the investigating officer is found guilty for a gross miscarriage of justice; and for the group to be given access to a copy of the audit report on the handling of dockets at Site B and any other police station in Khayelitsha.

In response to detailed questions, Western Cape police spokesperson Frederick Van Wyk did not confirm or deny whether the letter had been received. He said: “Kindly be advised that the case is currently with the Public Prosecutor of Khayelitsha Court and is awaiting a date for Regional Court. There were disciplinary steps taken against the mentioned [police] member.”

The organisation has given Magobiyane until Monday to respond to the letter which was sent on 8 April.

Next:  Thousands left destitute to face another storm expected to hit KZN this weekend

Previous:  Major shift in housing policy is an opportunity for civil society