Gay couple legally say “I do” after year-long battle 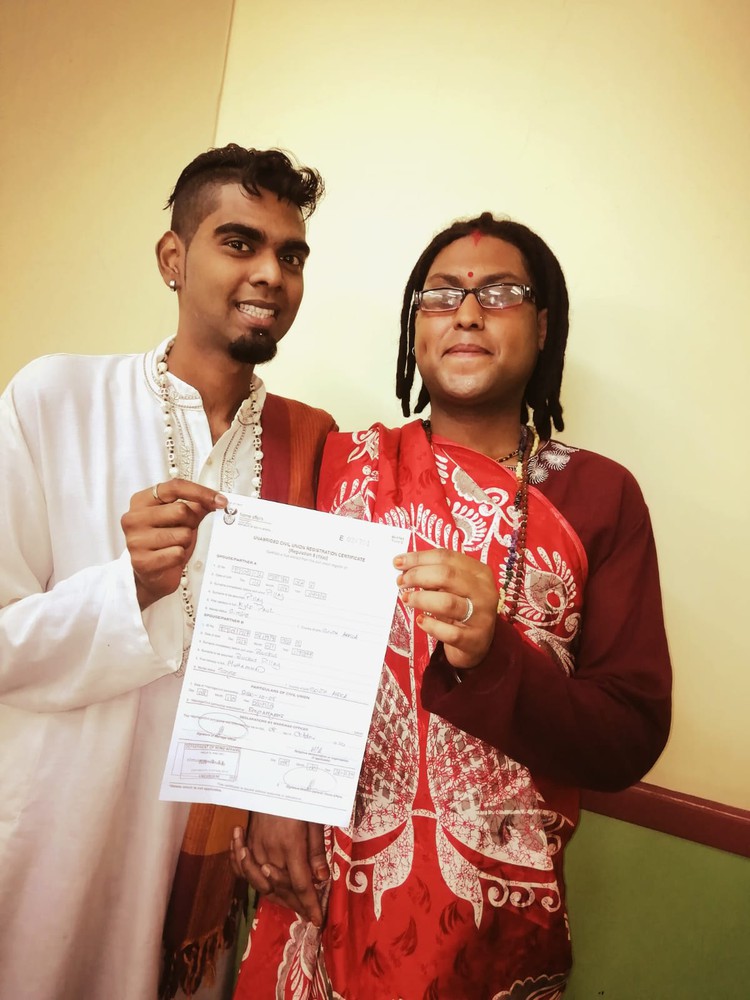 Muhammad Buckus (right) and Kyle Pillay were married legally at Home Affairs in Richards Bay on Thursday after a year-long battle. Photo: Supplied

A same-sex couple in Richards Bay finally said their “I do’s” legally at Empangeni’s Home Affairs office on Thursday. Muhammad Buckus and Kyle Pillay, who have been together for about five years, were given “the runaround” for a year by officials.

This week, GroundUp reported that Buckus and Pillay had exchanged wedding vows in a traditional Hindu ceremony in Pietermaritzburg in September 2019. They moved to Richards Bay soon after and immediately started making enquiries at the local Home Affairs office as to when they could legally solemnise their partnership.

The couple said they were given “excuse after excuse”, including that there were no qualified marriage offices to do same-sex marriages and that there was no documentation nor certificates.

GroundUp then sent questions to the department and the next day the couple were given an appointment for 10am on Thursday, 8 October.

Buckus said a Home Affairs official from Pretoria contacted them on Wednesday and “reminded us that we had the appointment and said he was checking that everything was ok and said he would phone us afterwards”.

Buckus said that while they appreciated the “VIP treatment”, they just “wanted to get married like any other person can”.

After their legal ceremony on Thursday, Buckus said: “We are relieved…The marriage officer was very kind to us. The only glitch was the issue of changing surnames. The system picked up that it was two men and wouldn’t allow it. So we just left our surnames as is,” he said.

Next:  Glebelands witness says accused showed him photos of victims

Previous:  “There are no jobs - this is how we support our families” says Kleinmond poacher

Appreciation to Ground up and friends and family

I would like to thank GroundUp, and especially Tania. Without her help this would not be possible. Also a further thanks goes out to all our family and friends who supported us, moreover, my in-laws the Pillay family for all their kind words and support. Also a special thanks goes to Anthony from the LGBT and also Ricky Robertson and family.

We are so glad that we finally got registered and hope that this will be a doorway for other couples to stand up for their rights and not give up.