Gomora in Joburg is where dreams go to die

Families crowd into tiny rooms, with no electricity or water, making a living as best they can 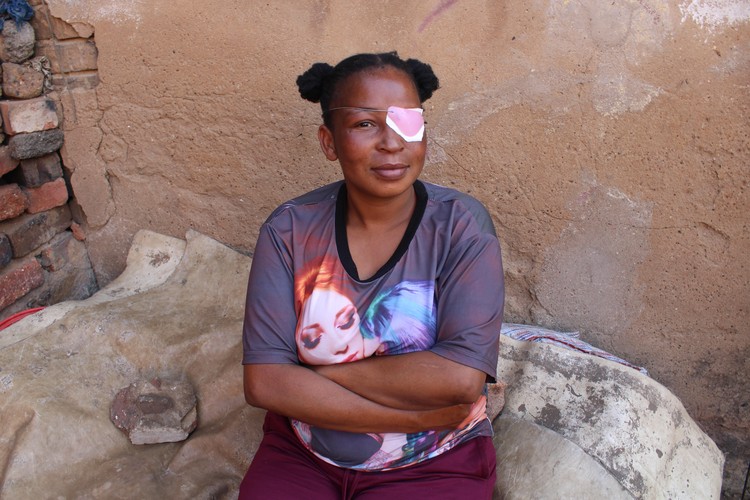 Tshiamo Mancho wears a patch over her left eye socket. An eye cancer patient, she had the eye removed in 2019 and is currently being treated at Helen Joseph Hospital. She and her toddler son live in a tiny room in “Gomora”, a ruined old building in inner-city Johannesburg.

Despite the building’s grim state, Mancho says she is grateful to have a place which she and her three-year-old son can call home. Counting the hours until she can go and fetch him from crèche, she worries about what she will cook for him. Their last bottle of paraffin just ran out and she has no money to refill it.

The old dilapidated building situated at the corner of Alexander and Market street, next to Central police station, is known as Gomora because of its condition, with more than 50 families living crammed in it and no toilets, electricity or water.

Around the building are makeshift shacks made of wooden boards and plastic sheeting with blankets. Some rooms are shared by two or three families, sometimes divided by curtains.

Those who could not find room inside have their belongings strewn around the premises. On the corner is a pile of material for recycling belonging to some residents and a large anthill where children relieve themselves throughout the day.

Like Mancho, the other people living in the building are vulnerable, living off odd jobs in the congested city centre. Most came from outside Johannesburg in search of greener pastures, a dream which has long since been lost.

Mancho arrived in 2012, escaping her Northern Cape home where she says she suffered abuse after her parents died. She is a singer and her dream was to make a living from her music.

But life proved to be more difficult and she resorted to washing people’s clothes and doing backing vocals for other aspiring musicians like herself. Now she mostly sings in church, she says.

“I had high hopes when I came to Jozi. I pictured myself as a star, recording my own album. But it didn’t happen like that.”

“Luckily I found a home at Gomora, even though it’s not a perfect home,” she says.

Mancho gets a disability grant and a child support grant which pays for her son’s crèche.

“My three year old child is safer during the day when he is at crèche because he gets a toilet there, clean water, food and sometimes watches TV because they have electricity there, things he cannot not easily get at home,” she said. She still dreams of recording an album one day. 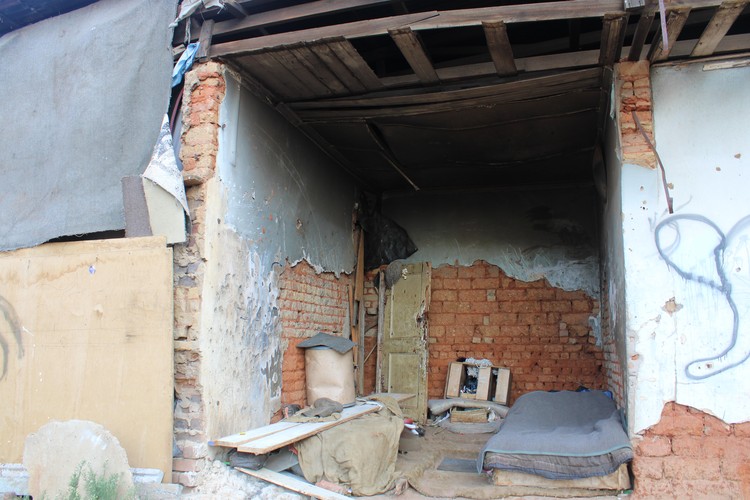 Fifty families have crammed into the ruined building at the corner of Alexander and Market Streets in inner-city Johannesburg.

Some families have been living at Gomora since 2005. Others were evicted from other Johannesburg buildings around 2008, and some tell stories of how the Red Ants took their possessions. Others came during the Covid pandemic.

Besides using the anthill, the families pay R2 to use the toilet at a nearby garage, when they can afford it. They fetch water from a broken pipe three streets away to do the washing and to bathe. Cleaner water for cooking and drinking is fetched at Bekezela College over 3km away or, if they can, they sneak into the nearby Central police station to collect water.

Vuyokazi Mavangana, one of the longest-staying residents, sits against a wall opposite her room with a stack of cloth and stuffing, sewing cushions. She lives in one small room with her five children, and her sewing has sustained her for over five years. She gets the R350-a-month Social Relief of Distress grant, and a child support grant for two of her children.

She can occasionally afford to give her children money to use the toilet at the garage. In the early evening she goes to fetch clean water wherever she can find it.

“I work hard to pay school fees for my son who goes to a private school here in the city centre and is very intelligent. Having a house of my own is something that l have wished for since registering at the housing office many years ago,” she says.

“Meanwhile it would make life easier if we had access to water and toilets.” 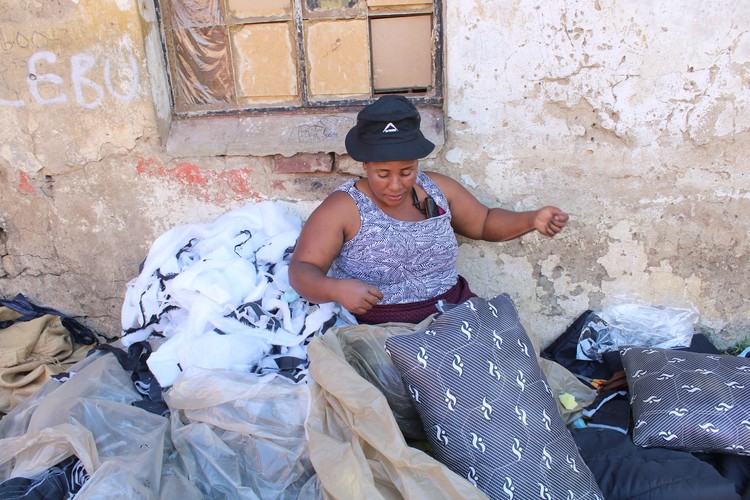 Thamsanqa Isaac Tsopo arrived in 2019 from his home in Rustenburg to seek a better life in Johannesburg, to help look after his two children whom he left with an aunt. But after several futile attempts to find work he resorted to recycling and built a small shack outside the building. He wishes the authorities would convert the old abandoned buildings in the inner city into homes for people like himself.

“I’m a South African citizen, but look at where we live, our government is failing us. My small shack only has enough room to lay my head at night and sleep.”

In the evening he lights a fire to cook for himself and a sickly elderly man who sleeps on a mattress, covered with plastic, next to his shack.

“The City has never visited us nor the government yet we voted in the elections, right here in the inner-city. Do they not care?” Tsopo asked. 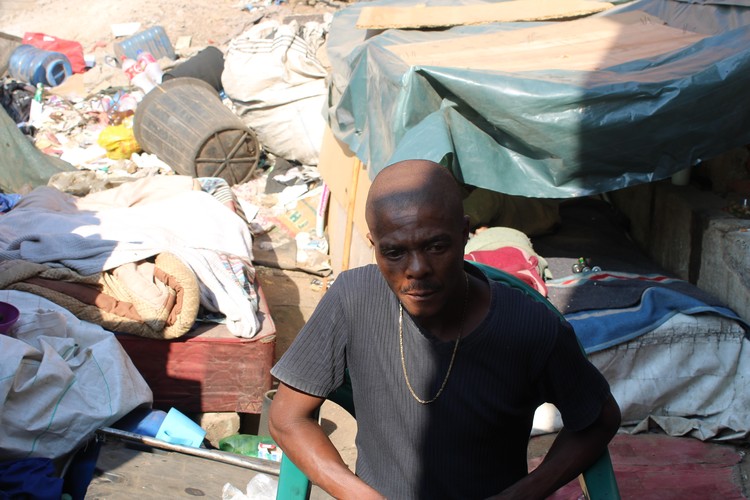 Thamsanqa Isaac Tsopo lights a fire at night to cook for himself and a frail older man.

At the back of the main building, Thabo Meva has a small shack, just big enough for a bed and a few possessions. He and others moved to Gomora when they were evicted from a building in Jeppestown in 2008. He works as a casual cleaner at the nearby Central police station, earning R2,000 per month and cannot afford another place. His wife is in hospital suffering from tuberculosis.

“If I earned more money I would find a more dignified and hygienic place to live, but I have to endure living here. Life in the city is not easy,” he said. 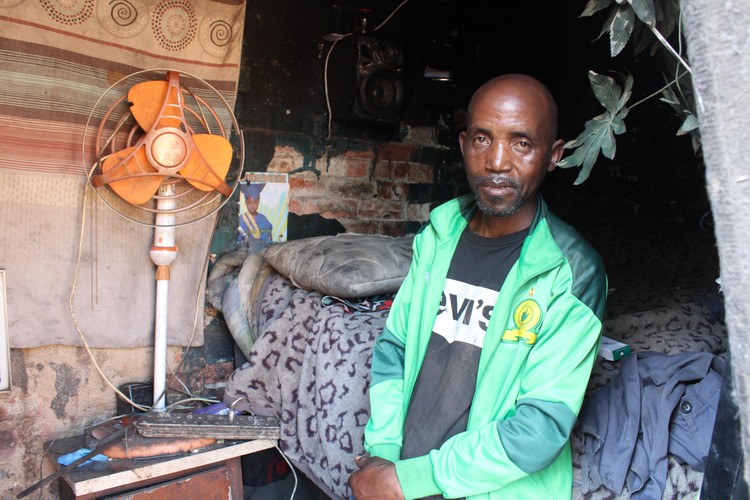 Thabo Meva used to take electricity from a street light but he says it is no longer working.

Councillor for the area Sihle Nguse (ANC) said the office for Human Settlements is assessing living conditions for provision of services such as water and toilets. He said the City of Johannesburg is also going through a process of identifying ownership of buildings where people are living informally before such services can be made available.

“The issue of shelter and accommodation is of great concern but we cannot condone such behavior by residents who just mushroom and settle as they please, building shelters because they want to move closer to the city. Currently we are facing such a challenge where people demand services knowing that they are living in informal structures which are against the City’s bylaws,” he said.

GroundUp asked the provincial department of Human Settlements about housing for disabled people like Mancho, who get disability grants.

Nthatisi Modingoane, Acting Director: Strategic Communication, responded that disabled people get preference with housing allocation and 5% of any housing development is reserved for disabled people.

But, Modingoane said: “The department treats each case differently and there’s no guarantee that when you’re disabled, you automatically qualify for an immediate allocation of one of our housing units. However, the officials at our allocations unit will have to scrutinise the matter and apply their discretion based on facts placed before them.”

Modingoane urged Mancho to apply at the Human Settlements office in Braamfontein.

Next:  Municipalities are failing to provide clean water. Citizens are stepping in to fix the problem

Previous:  Millions to be spent to complete abandoned Lottery-funded projects