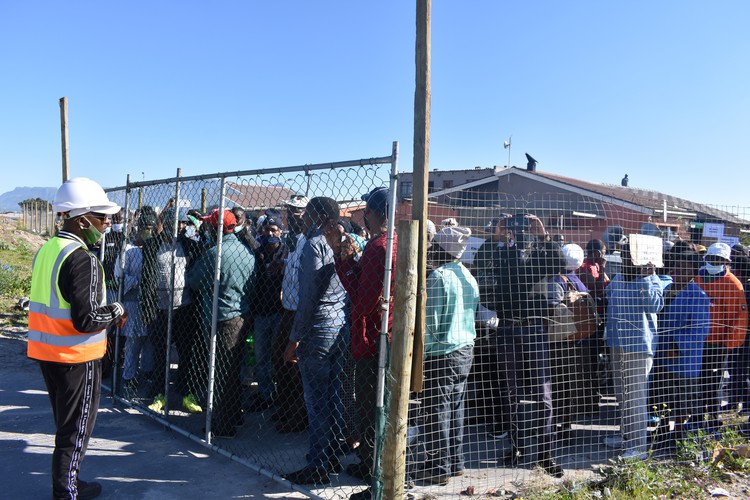 The Erf 8448 Housing Project remained closed on Monday after more than 50 residents from Gugulethu shut it down on Friday. Photo: Buziwe Nocuze

More than 50 residents from Gugulethu in Cape Townhave shut down the Erf 8448 Housing Project since Friday.

Mncedisi Thwala, of Gugulethu Disgruntled Beneficiaries, said the site will remain closed until the City of Cape Town addressed their concerns. “The houses they are building are not what we were shown more than 15 years ago. They don’t look like the sample at all. The City needs to explain what happened and we want the beneficiary list to be made public,” said Thwala.

He said they were told that the units would have two bedrooms, a kitchen, and dining area, but the houses being built look small.

According to him, the houses were meant to be completed in March this year. “They need to stop lying about the lockdown. They were slow before the country went into lockdown. We are giving them two weeks,” said Thwala.

Mayco Member for Human Settlements Malusi Booi said the houses all met the minimum size standard for housing. “This was very clear from the start of the project. These are houses free of charge but paid by the public so there is a specific limit on the cost of subsidy houses. The houses on site are not yet completed and therefore the comments on the quality are irrelevant at this stage,” he said.

Nceba Sandlwana, a community liaison officer, said it was the second time in a week the group had disrupted the site. He criticised the group for further delaying the project. “Not so long ago they were complaining about the delay of this project, now they are stopping it. It doesn’t make sense and I believe that they should’ve done something else instead of stopping the project.”

“There is no way that the company decided to build its own houses, they were told what to build. [Residents] are directing their anger to the wrong people if they are unhappy about something they know where to go,” said Sandlwana.

Thwala also took issue with the fact that workers and construction companies onsite were hiring people from outside of Gugulethu.

Booi commented: “Employment on the site is sourced from the City’s Job Seekers Database for local labour. However, for a limited number of specialist functions, contractors are permitted to use experienced labourers on their staff complement to ensure that quality levels are maintained.”

Next:  Gugulethu residents at wits end with company that built their flood prone houses

Previous:  Criminalising cannabis use by children is unconstitutional, court rules