“How can we be called foreigners in our land?” asks migrant worker from Lusikisiki 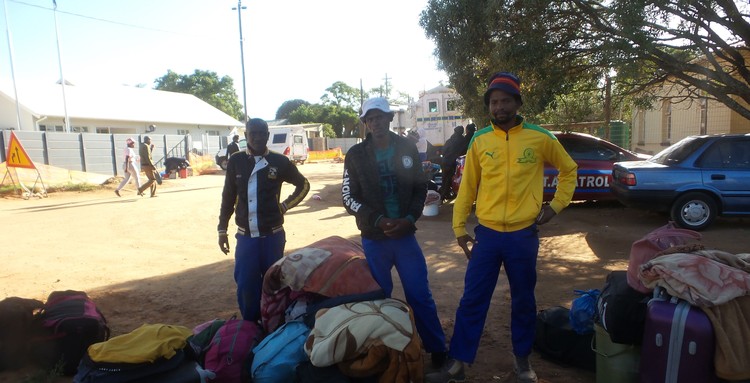 Seasonal workers Siyabonga Msiswa (left), Mandela Gayo (centre) and Dumani Ndisile (right) are camped outside the Hankey police Station with other workers after being chased out of their homes last week during violent clashes. Photos: Joseph Chirume

About 400 seasonal workers were forcefully evicted from their homes in Hankey in the Eastern Cape by local residents. This followed violent clashes at an informal settlement in the town last week.

Police say two South Africans and one Lesotho national were killed as a result of the violence. Several shacks at the Mountainview informal settlement, home to many migrant workers, were also burnt down.

The conflict appears to have a racial element. The permanent residents of Hankey are Xhosa. The migrants are mostly Sotho or from Pondoland.

On Saturday, Kouga Municipality’s Deputy Mayor Hattingh Bornman said that a delegation from Lesotho came with buses to transport 181 Lesotho nationals back home. The South African government provided buses for South Africans from rural areas in the province and Free State. Those who decided to remain went back to Hankey townships, he said. “We are working on how to ensure the incident will not recur again,” said Bornman.

According to police, the clashes between local residents and migrant workers mostly from Lesotho was sparked by the murders of two people from Centerton, another township in Hankey.

Police spokesperson Colonel Priscilla Naidu said that community members from Centerton had marched to an area predominantly occupied by seasonal farm workers from Lesotho. “When this group tried to attack, the seasonal workers from Lesotho retaliated by throwing stones at them.

“Centerton residents allege that the foreign nationals are responsible for the deaths of two people. These murders took place during the early hours of [29 May] in Centerton. In both murders, the motive and suspects are unknown.”

Naidu said several shacks were set alight and pelted police vehicles with stones during the protest. She said police escorted Mountainview residents out of the area on 1 June to a neighbouring area for their safety. 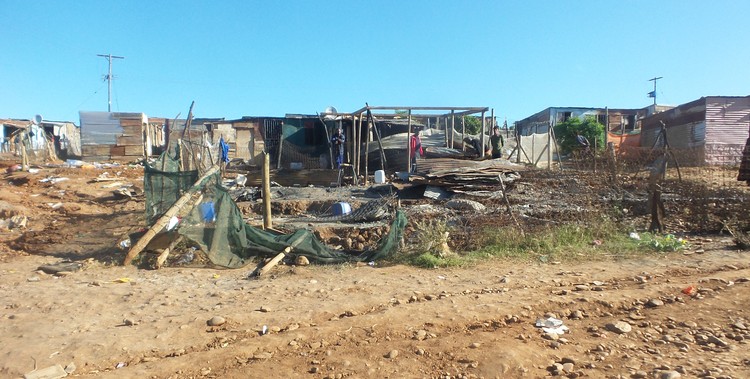 Ward 13 Councillor Vuyani Zana said his efforts to bring peace to the warring factions were fruitless. He said that Lesotho nationals had initially refused to uproot their lives and leave their homes. “After the situation deteriorated, a bus was arranged for them to leave immediately,” said Zana.

When GroundUp visited the community last week, we met with about 100 people who were sitting at the Hankey Police Station on Thursday while they waited for transport to leave town.

We were informed that another 300 people were moved on Wednesday to Geelhoutboom farm which is owned by the Sarah Baartman District Municipality. These people complained about not having access to food and water. They also did not have warm clothes and blankets.

“The murder incidents happened in formal houses in Centerton and that had nothing to do with people staying in Mountainview informal settlement. Our only crime was that the suspect is a Sotho speaking person,” said a migrant worker from the Free State.

The man said he has been a seasonal worker harvesting citrus fruits in Hankey and Patensie for 13 years. His shack was burned and his belongings worth R7,000 were looted, he said. He is among the 300 people moved to the farm.

A Zimbabwean national at the farm, who asked not to be named, said the situation at the three farmhouses was dire. He has a wife and a very young child.

“The Kouga Municipality promised to bring water tankers but none has been provided. My child has been crying from hunger. There are no mattresses and blankets. We have to sleep on the cold floor. This place is very close to the Loerie Dam and is very cold,” said the man as he held his child in his arms. 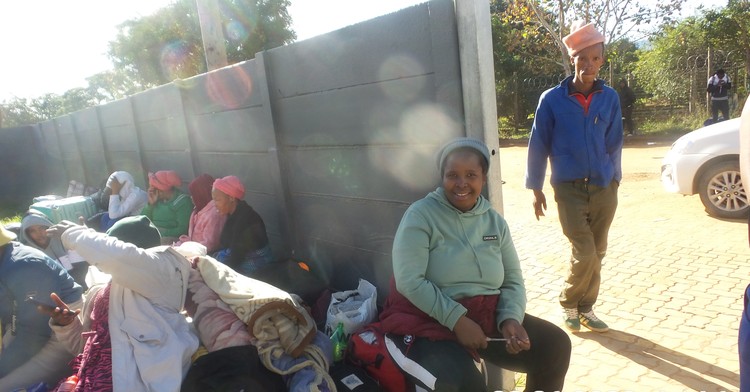 Farm worker Aviwe Dloto sleeps at the entrance of the Hankey police station, waiting for transport to take her and other seasonal workers back to Mt Frere.

Siyabonga Msiswa, a South African from Lusikisiki, told GroundUp that he started working in Hankey in April. He said he lost property worth R5,000 during the looting last week.

When we spoke to Msiswa, he was at the police station holding onto a small bag which he managed to grab during the chaos. He has a wife and three children in Lusikisiki.

“They went from shack to shack beating us and forcing us to leave without any belongings. They shouted that they don’t want to see Amapondo and other tribes from rural areas in the Eastern Cape. They also vowed to evict all Lesotho nationals from the area. I will never come back here again,” Msiswa said.

Aviwe Dloto lived with her cousin, Abongiwe Mjongwa in Mountainview informal settlement. They were also camped at the entrance of the police station, waiting for transport to take them back to Mt Frere.

Dloto told GroundUp, “I will not come back here again. Hating other people because of their origin is not good. How can we be called foreigners in our land? I’m going to struggle to raise my children because there are no job opportunities in rural areas.”

Police are still monitoring the community to ensure that no further incidents occur.

Next:  Municipality fails to pay its workers their May salaries

Previous:  Education department told court that learners would be in school this week. It hasn’t happened

So the police, and local and national government have just given up?

How can the response here be to rely on buses to take frightened people away?

Conflict and tension in communities, and targeting vulnerable groups is not new. But reading what police, councillor, deputy mayor say here alongside recent "inspections" and remarks by the EFF, ASA, ANC, DA and everything in between...

It feels easier recently to find clear support for everyone's right to live and work in peace when talking to people on the street (public meetings, invariably called in reaction to some flashpoint, are a different story) than amongst political leaders and those responsible for investigating murders like those in Centerton. The same goes for regulating wages paid to citizens and migrants alike, or preventing mobs from burning people's homes down and driving them away.