They charge the public R2 to use the toilets 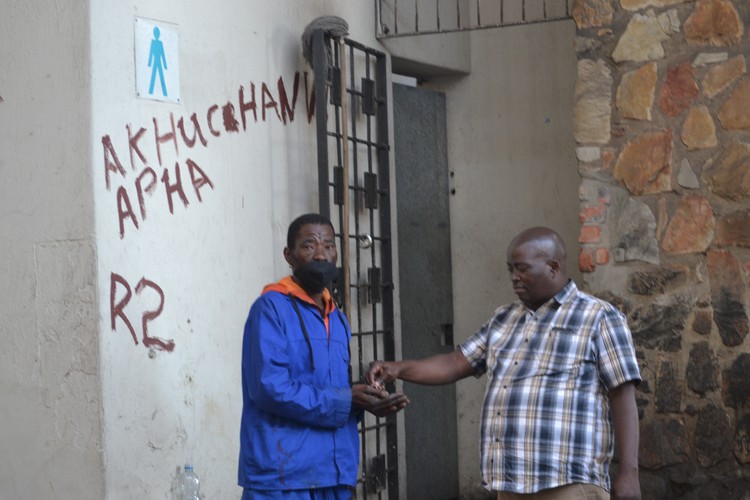 Taxi driver Khaya Jacobs (right) compliments toilet cleaner and former car washer Thando Ndyebi who has been cleaning and maintaining the neglected toilets near the taxi rank in Gqeberha since January. Ndyebi charges a R2 entry fee and makes up to R200 a day. Photo: Thamsanqa Mbovane

Public toilets in the Gqeberha and Kariega CBDs had been filthy and locked for over two years until recently, when some homeless people and informal traders began cleaning the toilets themselves and charging an entry fee of R2.

In 2019 GroundUp reported on the leaking public toilets at the Govan Mbeki taxi rank. People had started to relieve themselves in public because the toilets were so revolting. At the time, Nelson Mandela Bay Municipality said it was “working around the clock” to resolve the problem. But nothing seems to have happened.

“They were stinking every day,” said Thando Ndyebi, who has been keeping the toilets at the rank clean since January. “I used to wash taxis, but decided to take my material and cleaned up the walls inside and outside the toilets.”

Ndyebi said he makes between R90 and R200 a day, charging people a R2 entry fee. Those who use the toilets warned not to smoke in the toilets and to wear a mask. He spends about R140 per month to restock the toilet paper.

Noncedo Ndindwa, who sells braai meat and fresh bread in the city centre said, “It’s better to pay R2 than get infections in filthy toilets.”

In Kariega centre, toilets near the taxi ranks and in Republic Square and Johan Cronje Square are also being maintained by former car washers and hawkers.

At Johan Cronje Square, Nwabisa Witbooi also charges a R2 entry fee. “They were filthy and unhygienic. The toilets were never cleaned and they were not flushing at all, but I found homeless people who assisted by fixing faulty sewer pipes.”

“My worry was the elderly people who had no place to relieve themselves.”

Next:  The Human Rights Commission is wrong: vaccines are not always optional