They are demanding that companies like Uber reduce fees 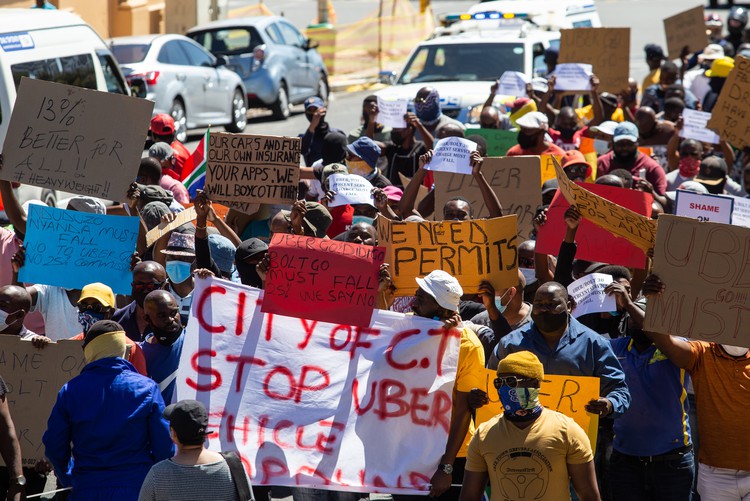 Over 100 e-hailing services drivers in Cape Town marched to Parliament on Friday, calling for a review of the government’s regulations and commission fee deductions from service providers. Photo: Ashraf Hendricks

About 100 e-hailing services drivers in Cape Town marched to Parliament on Friday, calling for a review of the government’s regulations and commissions charged by service providers like Uber.

They are now pleading for the national transport minister to intervene.

Drivers from Uber, Bolt, DiDi and InDriver joined the protest, holding placards stating “We need permits”, “Uber stop exploitation” and “Uber Go must fall”. One of their main concerns was over the e-hailing commission charges.

For example, Uber charges a 25% fee on all rides, but protesters want this to be changed to 13%.

Drivers we spoke to asked to remain anonymous.

One driver, who is a member of the E-hailing Drivers Association, said that the protest followed Uber’s decision to drop prices last week without consulting the drivers. He said they don’t feel “respected” and regardless of the price drops, the company still took a 25% cut of their earnings. He said that drivers are expected to fuel, insure, service their vehicles and purchase cellphone data themselves.

The driver said the government needed to regulate the e-hailing industry to prevent international companies from exploiting people.

An Uber driver said he pays R2,500 to insure his car. He said that drivers are making insufficient money on trips. Another concern raised by drivers was safety. “If you are hijacked or killed, Uber will do nothing” he said after recalling an incident where he was robbed at gunpoint.

Another driver who owns three vehicles said that the monthly insurance, fuel and maintenance costs easily amount to over R10,000 per vehicle per month. He wants the government to provide some subsidy or assistance.

Other demands raised were a minimum of R10 per kilometre fee after deductions and a R1 per minute waiting penalty fee.

A memorandum was handed over to representatives of the National Department of Transport and the Department of Labour. Drivers said that they will give the government seven days to respond whereby they would consider protesting again.

Questions sent to Uber over its fee policy went unanswered by the time of publication.

Frans Hiemstra, General Manager of Sub Saharan Africa at Uber said that they were aware of the e-hailing protest. Hiemstra said that Uber took the concerns of drivers seriously and that they are currently engaging with them to “find a way of maximising [drivers’] earning potential while meeting the needs of riders”.

Next:  By the time Home Affairs reopens its Cape Town refugee office it will have taken ten years

Previous:  Principals are drowning in the education department’s admin demands