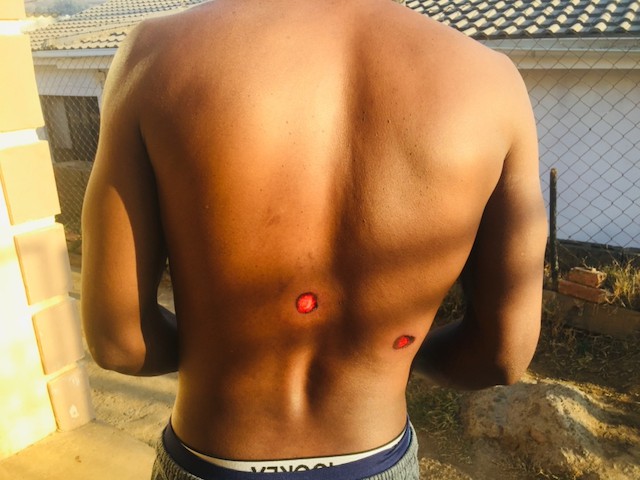 A family in Pietermaritzburg have accused police officers of assaulting them on Monday night. The Magubane family, in Imbali Unit 13, said police searching for looted goods shot two family members and their pet dog with rubber bullets.

After the incident the family immediately went to open a case of assault against members of South African Police Service (SAPS) at Plessislaer police station.

A member of the family, who did not want to be named, said police forcefully entered the property. GroundUp saw that the main door to their home is broken.

“I went to my son’s bedroom and found the police beating him,” she said. “I heard one saying ‘sizohamba nawe wena’ (we are taking you with us). I went outside. The big guns they were carrying scared me. I was shaking.”

Police took a heater, saying it had been looted because the family could not produce a receipt. According to the family, the heater had been purchased at Market Place in February.

The family says police arrived at around 10:30pm. This was the second time they had come to the house looking for looted goods. They were in uniform but without name tags.

“I told them to wait so that I could tie up the dog,” said a family member. “But police said they knew there were looted goods hidden in the kennel. They went straight to it and shot the dog.”

“That is when there was an exchange of words between us and them,” said the family member.

The family member said more police kept arriving until there were over 30 in the yard. “The police were carrying big guns.”

Members of the family showed their wounds – a 45-year-old who was shot twice in the back and a 39-year-old shot on the leg. They say the shooting occurred when they went to close the gate. This was after they had been beaten by police.

“We want to know why so much abuse and torture. Why did they shoot my brother? My siblings were not attacking them,” said one family member.

“I want justice to take its cause on this matter. The police have to account for what they did to the whole family,” said the 39-year-old.

The family say that they immediately went to open a case but police would not help them. They noticed that police who had taken part in the raid were present. On Tuesday, the family returned to Plessislaer police station and a case was opened.

KwaZulu-Natal police spokesperson Colonel Thembeka Mbele confirmed that a case of assault, malicious damage to property, and cruelty to animals had been opened.

“Our children can’t play outside any more” say Hillview residents