Court hears arguments over R4.5 billion development which would include an Amazon headquarters 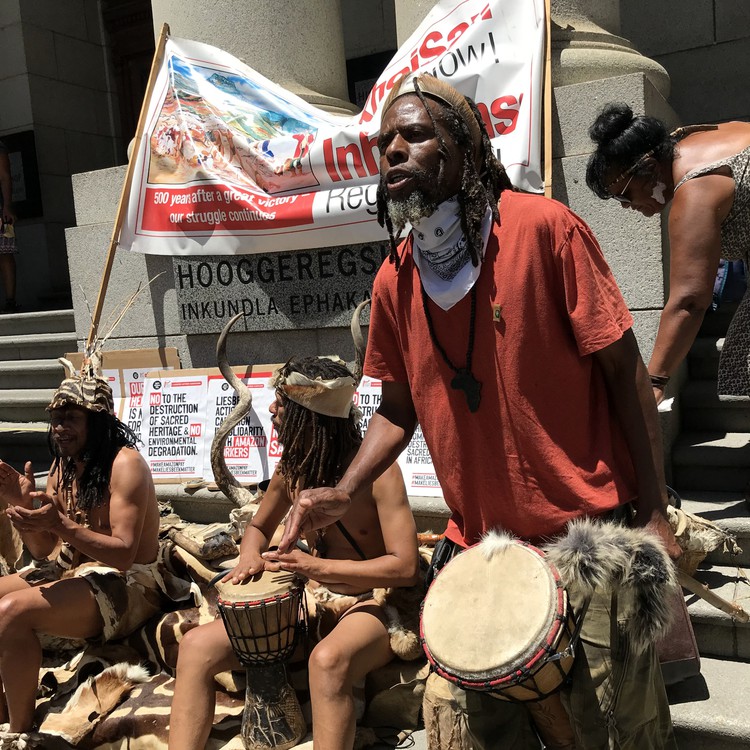 Goringhaicona senior headman Sibusiso Zimbili Nkundlane leads a demonstration outside the High Court as an application for an urgent interdict against a mega development on the River Club site was being heard. The Goringhaicona, along with other First Nation houses, believe the construction site in Observatory is sacred to their cultural heritage. Photo: Steve Kretzmann

In what may prove to be a landmark case for First Nation rights and the recognition of intangible heritage, arguments for and against a mega development on a historically significant floodplain were heard in the Western Cape High Court last week. The case involving constitutionally guaranteed rights, which was heard by Deputy Judge President Patricia Goliath from Wednesday to Friday, results from an application for an urgent interdict to halt a R4.5 billion complex, incorporating Amazon’s new southern African web service headquarters, being built at the River Club in Observatory, Cape Town.

The Observatory Civic Association and Goringhaicona Khoi Khoin Indigenous Traditional Council applied to the court for an urgent interdict in August last year after property owners and developers Liesbeek Leisure Properties Trust started work on buildings, some up to ten-storeys high, on 26 July. The trust had ignored requests to delay construction pending a review of both the City of Cape Town and the Western Cape Department of Environmental Affairs and Development Planning (DEADP) decisions authorising the development.

It is not contested that the site at the confluence of the Liesbeek and Black Rivers is of significant cultural and heritage value. It is a site of original colonial dispossession in Southern Africa, where the Dutch forced the Khoi peoples off their ancestral grazing lands. The land is considered sacred for the Khoi and San people and is near the site of a battle between the Portuguese and the Khoi in 1510 in which Viceroy Francisco D’Almeida was defeated and killed.

The trust’s advocate Sean Rosenberg SC argued that an interim interdict would not just pause construction until a review could be heard by the court, it would scupper the entire project. Amazon, the development’s anchor tenant, would not countenance a 24-month delay, and it was “almost certain” the project would not go ahead if delayed by an interim interdict, said Rosenberg during his arguments on Thursday morning.

He argued that no urgent interdict was necessary, as no intangible heritage was threatened by the development, and “a proper, lawful assessment” of the City and provincial authorities’ decisions could take place.

He said the 14.5 ha site, maintained as a nine-hole golf course and conference venue by the trust since 2015, was “degraded” in terms of heritage. The current construction represented a “partial transformation of an already degraded site”, and further cultural or heritage protections could be put in place, if necessary, Rosenberg said.

He argued that the planned development, which would rehabilitate part of the canalised Liesbeek River, incorporating an eco-trail, indigenous herb garden, ampitheatre for rituals or performances, a First Nation media centre, and the memorialising Khoi heritage with symbols and the naming of streets in the precinct, would give greater effect to cultural heritage than the site as it was.

He argued against the applicants’ view that the heritage impact assessment used to justify the environmental authorisation granted by DEADP minister Anton Bredell, was fatally flawed.

The impact assessment forms a central part of the case, as it raises the question of whether intangible heritage was properly considered and what impact the development would have, as well as whether proper consultation, particularly with First Nation groupings, took place.

Acting pro bono for the applicants, advocate Alan Dodson SC, who was the first to stand before Judge Goliath on Wednesday, struggled to get into his argument as Goliath peppered him with questions about what the applicants wanted for the site, what they considered to be the heritage aspects, the timing of the application, and why they believed they had not been able to participate in consultations. This kept the legal team scurrying to refer to relevant sections in their papers.

Dodson argued that the environmental authorisation process which gave the development the go-ahead, was unlawful.

The applicants’ founding affidavits state the impact assessment forms part of the Environmental Impact Report (EIA) required under the National Environmental Management Act. According to the National Heritage Resources Act, Heritage Western Cape as the relevant heritage authority, had to approve the assessment. Yet, this approval was never given, he said.

In fact, he said, Heritage Western Cape, addressing the deficiencies in the impact assessment, required further engagement with First Nation groupings to inform a supplementary report. In the compilation of this report the Goringhaicona, and other First Nation houses, were excluded in favour of a grouping supporting the development, who formed as the First Nations Collective.

Dodson said this supplementary report had effectively dismissed any input from the Goringhaicona on the grounds of an entry in Jan van Riebeeck’s diary in which he labelled them “rabble” and “sluggards” who live in “little hovels in the sand hills”.

He also referred to a letter from the First Nations Collective to Goringhaicona representative Tauriq Jenkins which states the Goringhaicona would be excluded from the consultations about the supplementary report if they did not join the collective. The supplementary report leans heavily on input from the First Nations Collective, who formed what was elsewhere referred to as a “social compact” with the developers and supported the development.

Appearing at the end of the first day as amicus curiae (friend of the court), Michael Bishop for the international NGO the Forest Peoples Programme which fights for indigenous people’s rights, stated the need to consider international law when constitutional rights were in question. Bishop said this meant meaningful consultation with indigenous people had to take place. Further, since indigenous people had been historically excluded from established forums, engagement had to take place within a framework agreed upon by them, and consensus, not simply input, was required.

Advocate John Newdigate SC for the Western Cape Department of Environmental Affairs and Development Planning argued Jenkins had participated in all established forums where he was able to voice objections, and thus Bishop’s contribution was “interesting, but irrelevant”.

Rosenberg and Newdigate attacked the applicants’ contention that the department was legally obliged to ensure the heritage impact assessment met the requirements for further information stipulated by Heritage Western Cape in the form of the supplementary report. They argued that further consultation with First Nation groupings was a recommendation, not a requirement, and had been met.

At the end of proceedings on Friday afternoon, Dodson countered this, arguing there were statutory requirements which neither the heritage impact assessment nor the supplementary report had met, and the manner in which consultation was conducted resulted in exclusion of numerous First Nation groupings besides the Goringhaicona.

Ron Paschke SC, appearing for the City on Friday morning, warned of the economic impact of halting the development.

He said given the economic crisis Cape Town found itself in following the Covid-19 pandemic, the city could not afford to lose a development creating more than 5,000 direct construction jobs and 19,000 indirect jobs. The R4.5 billion investment injection would quadruple current construction investment which had declined to R1 billion during the pandemic, and result in R8.5 billion in economic output for the city.

Dodson, however, later countered that the constitutionally enshrined cultural and heritage rites which would be irreparably harmed, were “priceless”, and that if allowed to go ahead, the developers would be allowed to literally build themselves into an “impregnable position”.

Judge Goliath noted the developers had been asked to delay construction, pending a court review, and had proceeded at their own risk.

She said she would give the matter the priority its urgency demanded, but did not state when her judgement would be delivered.

Next:  Eskom loses bid to reduce power to municipalities