R10 million was paid but no work was done 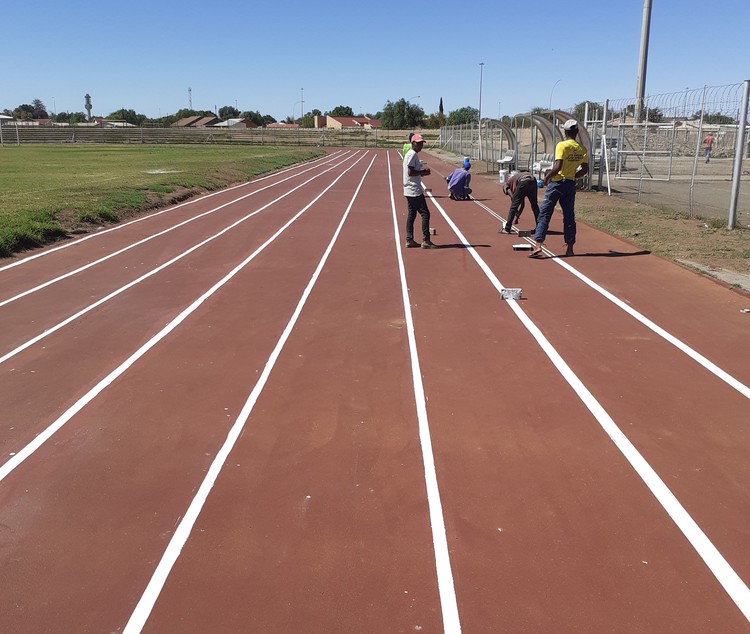 The Galeshewe Stadium athletic track after it was completed. Photo: Charles Mokoena

The director of a non-profit company which was paid R10 million by the National Lotteries Commission to build an athletics track in Kimberley says she was pressured into sub-contracting to an IT company - which failed to do the job.

The NLC gave a grant of R15 million via non-profit company Inqaba Yokulinda on March 7, 2018. Of this, R10 million was earmarked for the track at Kimberley’s Galeshewe Stadium. The grant was signed off by Phillemon Letwaba, who is currently on a paid “leave of absence”, on 26 February, 2018.

The remaining R5 million was for Inqaba to conduct a nationwide series of youth development initiatives, including camps for 400 youth in each of SA’s nine provinces. That part of the project was completed and all the funds accounted for.

Inqaba director Buyisiwe Khoza told GroundUp that she had been “pressured” into paying the R10 million to a Pretoria IT company, Unicus Solu(IT)ons, which was responsible for hiring contractors and overseeing the building of the track. But, based on Unicus’ website, the company has no record of any involvement in infrastructure projects.

The company says on its site: that it “delivers a broad range of solutions focused in the IT spectrum that address the challenges across the breadth and depth of the enterprise”. Unicus is owned by Jabu Sibanda, who had initially represented himself as an employee of the NLC, Khoza said.

In a statement to the Hawks, Khoza said she had received a call early in 2018 from Sibanda, who was unknown to her, claiming that he was the provincial manager of the NLC in Mpumalanga.

“He reported to me that the following persons: (CEO) Chief Executive Officer – Charlotte Mampane, (COO) Chief Operating Officer – Phillemon Letwaba - from NLC Head Office in Johannesburg had sent him to approach me to assist as an NPO to build athletic tracks for North West and Northern Cape Provinces,” Khoza said.

“He further said I was highly recommended because of the work I had done in development and training.”

Within three days of the NLC paying R15 million to Inqaba Yokulinda, Khoza was presented with an invoice for R10 million by Unicus. She said she was “instructed” by Terrence Magogodela, the recently-appointed acting CEO of Athletics South Africa (ASA), who was the “programme director” for the stadium project, to pay it.

This was confirmed in an affidavit by a colleague, Billy Ntelebovu, who was present at a meeting where the payment instruction was issued.

She said Magogodela had vouched for Sibanda and she had been told “the COO [Letwaba] had queried why the monies were not transferred yet to Unicus”, Khoza said in her statement. As a result she paid it, and requested documentation to protect her own organisation “as I was not comfortable”.

After six months Khoza was even more uncomfortable.

“Our NPO is focused on development and we have worked hard for our reputation,” Khoza told GroundUp. “We were coming under pressure from the Kimberley municipality (the owners of the stadium) and community members who knew the Lottery had given the money and were asking why the track was not being built.”

She said she had contacted the NLC when she realised there was a problem. Sibanda, she said, had told her the money “was finished”. In July 2018, she visited the NLC offices in Pretoria and met Letwaba and Tsietsi Maselwa, the organisation’s legal head, to again complain about Unicus.

“They said to me that they would retract the monies. In the same month, I cancelled the contract with Mr Sibanda requesting him to pay all the R10 million back as it was meant for development.”

Despite a written undertaking to pay back the money, Sibanda had failed to do so, Khoza said. “I regret that I never opened a case prior to finally reporting it. I was scared, I was advised that my life was in harm’s way,” Khoza said.

The commission’s response was to give Inqaba a further R4,278,000 on September 25, 2019, to complete a project it had already paid for. Inqaba hired a new contractor, which used mostly local labour, to lay the tracks. They also renovated and painted the stadium, renovated the change rooms and fixed broken and leaking taps and toilets, even though this was not part of the funded project.

Work began in October 2019 but was delayed by heavy rains and only completed in February 2020. It cost just over half of the R10 million that the NLC had already paid for just the athletics track.

Her office in Ratanda in Gauteng was burgled and files, laptops and memory sticks were stolen. However other valuable items “like cellphones, printers, and computers” were ignored by the thieves, she said. Her email account was hacked and the password changed, and she could no longer access emails relating to the project.

“I was really scared and took my kids to stay with my mother as I was very worried for their safety,” Khoza said. “I also moved to another office and moved around, staying at different places. It was a very scary time,” she said.

In response to detailed questions from GroundUp, Sibanda said: “I have taken note of the claims made by Ms. Buyisiwe Khoza. I am cooperating fully with the relevant authorities that are looking into the matter. Ms. Khoza is being very opportunistic and selective in her allegations. I intend allowing the investigation to reach its conclusion before I comment any further.”

ASA financial manager Magogodela denied that he had instructed Khoza to pay Unicus. “My view was merely sought on whether Unicus, represented by Sibanda, was a trustworthy entity. In view of Unicus having executed a previous project for ASA without any issue, I had no reason to doubt his bona fides.”

He said Sibanda had asked him to assist “with the compilation of the application for funding not in any capacity representing ASA, but merely as a person who understood the funding requirements”.

ASA spokesman Sifiso Cele said ASA president Aleck Skhosana had refused to sign a prepared letter endorsing Unicus for the project as the request “did not conform to our relevant policies”. He said: “…the SIU in conjunction with the Hawks are conducting investigations into this matter and …[have] visited the offices of the NLC to gather further information on various projects and presumably on the above project as well. In light of the above developments, we do not wish to prejudice their investigations … ASA would rather co-operate … with their investigators as opposed to airing our views in the media.”

The NLC failed to respond to detailed questions sent twice by email to spokesman Ndivhuho Mafela. Receipts were received showing that the emailed questions had been read by Tsietsi Maselwa, the NLC’s head of legal, and Gugulethu Yako, the Commission’s legal manager.

In response to questions about whether the Hawks were investigating the Galeshewe Stadium matter, Hawks spokesperson Colonel Katlego Mogale said: “I’ve sent your inquiry to Northern Cape and they have no investigation of this nature. Currently I’m waiting for the national or other provinces to respond.”

Suspension of NLC executives and board

One has to wonder why there is such overwhelming evidence of the NLC leadership being complicit in corruption and misappropriation of funds, yet no action is taken against these people who are stealing public money and they still occupy their respective positions and have the opportunity to cover up their corrupt acts. It is about time that the minister places the whole institution under administration while the SIU and the seemingly captured Hawks investigate.