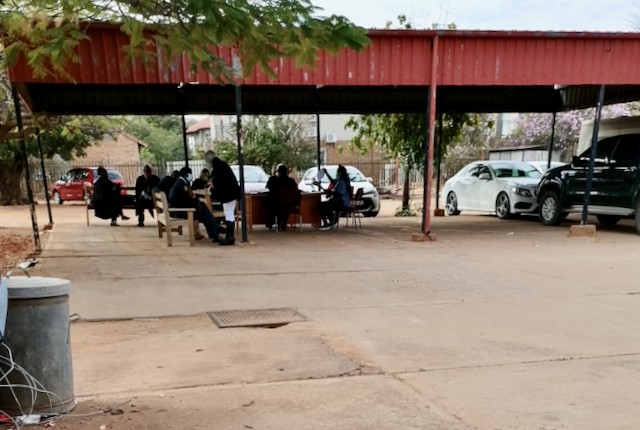 “It is court time. Let’s go in for the hearings,” a police officer shouts. It is 9am on a Wednesday and about 15 people walk to an open air car park with a red awning. They are sanitised as they pass through a gate with a security guard. This is the Musina Magistrate’s Court.

There are lawyers in their black gowns, a public prosecutor, the magistrate seated at a desk, and a few police officers. A few metres from the makeshift “courtroom”, is a waiting area for people who will have their cases heard.

People told GroundUp they didn’t feel safe under the current arrangement. “Anyone can walk in and attack us,” said one woman.

The court building was closed by the Limpopo Department of Labour on 26 July. A public notice from the Legal Practice Council advises the public that certain matters will be postponed until arrangements are made by the departments of justice and labour.

In a press statement on 30 July, Thami Mchunu, from the Department of Public Works and Infrastructure (DPWI), said a contractor was appointed on 23 May 2018 for repairs and refurbishment of the court. Work was scheduled to be completed by 23 May 2019. But the contractor ran into financial problems and stopped working. DPWI was forced to cancel the contract in January 2019 due to non-performance. The matter is now being litigated.

The DPWI has apologised to citizens for the inconvenience, and has promised to work closely with the other departments. It is in the process of appointing a new contractor.

John Teffo, the Limpopo Public Servants Association manager said, “The arrangement is unprofessional as it exposes the officials to possible risk and danger as the security has not been enhanced.”

Next:  No water means no service: Hundreds turned away at Gqeberha labour office

Previous:  Rural families battle to get water although they live near a dam