“There are toilets but we cannot use them” 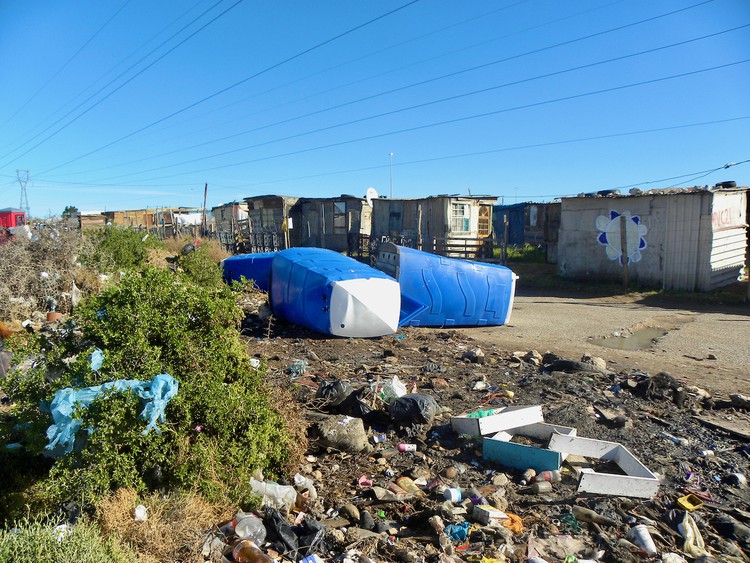 Mobile toilets at Powerline Informal settlement in Port Elizabeth were blown over in the wind and have been lying on the ground for weeks. Photo: Joseph Chirume

About 15 mobile toilets recently provided for residents of Powerline informal settlement in Port Elizabeth, have been lying on the ground for weeks after they were blown over by the wind.

Residents say the service provider failed to secure the toilets when installing them. Raw sewage floods the area where the toilets stood. Some of the toilets no longer have their bucket bases.

There are about 1,500 people in the informal settlement and some families have been living there for more than 20 years, using pit toilets until the municipality introduced a bucket system.

Resident Manase Jantjies says the Covid-19 pandemic is in some ways a “blessing in disguise” as the settlement received water tanks for the first time and more mobile toilets. “But the municipality did not come back to check how these toilets were installed,” said Jantjies.

“Port Elizabeth is known as the Windy City. Most of the toilets were knocked down soon after they were put on site,” he said.

Esinath Mashaba, who has lived in Powerline for ten years, says that since the toilets were blown over “we have resorted to our old system of defecating in plastic bags and throwing them away … This makes me angry that there are toilets in our area but we cannot use them.”

Nelson Mandela Bay Municipality spokesperson Mamela Ndamase said municipal officials would visit the area and ensure the mobile toilets are secured. “The matter will be attended to immediately,” said Ndamase.

Next:  Parliament to order National Lotteries Commission to hand over details of all its grants