Many learners sent home from “unprepared” schools, while others return

“Things have changed a lot” 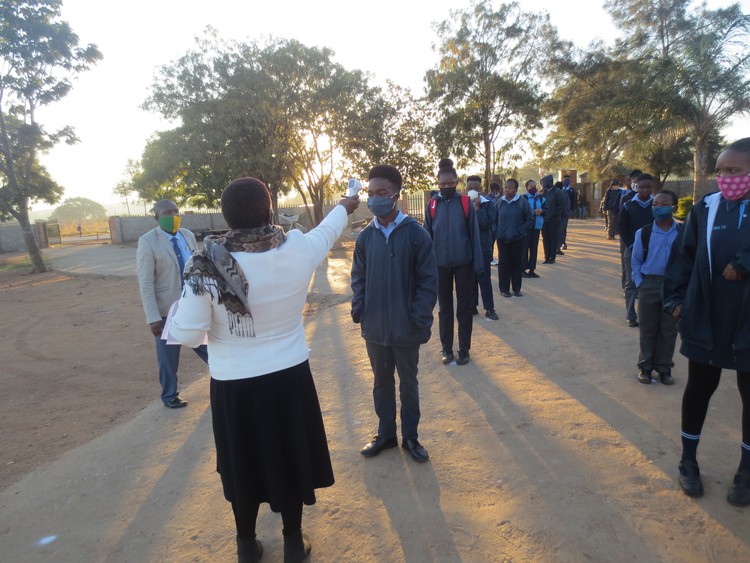 Grade 7 and 12 learners being screened before entering Muthuhadini Combined school near Louis Trichardt in Limpopo on Monday. Photo: Bernard Chiguvare

Thousands of grade 7 and 12 learners returned to school on Monday while observing new rules of social distancing and wearing a mask at all times. But the start of the new term has also highlighted serious challenges faced by many schools with poor infrastructure or little to no ablution facilities. This has resulted in many schools reportedly not being ready to welcome learners back this week as well as several protests by parents who fear for learners’ safety.

We visited schools in Louis Trichardt in Limpopo, Philippi East in Cape Town, Uitenhage and Mthatha in the Eastern Cape, Bethelsdorp and Motherwell in Port Elizabeth and Sweetwaters in Pietermaritzburg.

In Louis Trichardt, about 116 grade 7 and 121 grade 12 learners at Muthuhadini Combined School were ushered into the gates with a stern reminder to “observe social distancing and please put on your mask.”

Most learners were wearing masks and those who were not, were handed one by the school. No learner was allowed inside the school without a mask. As the learners walked in, they had their hands sanitized and joined the queue for screening.

Educators and members of the school governing body (SGB) were doing the sanitizing and screening.

Each grade was separated into classrooms with no more than 20 learners. In total the school has 1,769 learners from grades R to 12.

According to David Ndou, chairperson of the SGB, the school was in the process of getting more classrooms, water and toilets. The school currently has two blocks of toilets for staff, two two enviro toilets for younger learners and two pit toilets for the older ones. There are 41 classrooms.

“When all learners resume learning we will have serious challenges in classrooms, toilets and water. Before Covid-19, learners shared desks. The school has some flush toilets, but we still need more,” said Ndou.

The school has its own borehole and three water tanks but Ndou said more tanks are needed as other learners are expected back by August.

Tidimalo Chuene of the Limpopo Department of Education said: “We are using the phasing in approach to notify us of capacity in dealing with challenges in different schools.”

She said some schools would be using community facilities as classrooms. 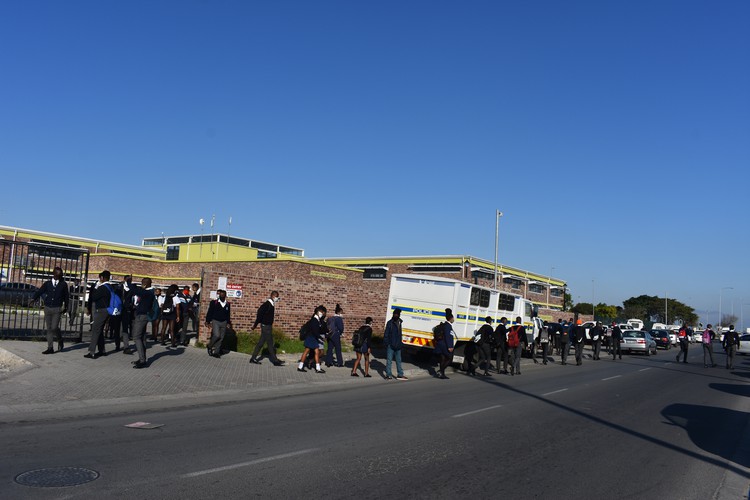 At Vuyiseka High school in Lower Crossroads, Cape Town, learners were sent back home by the SGB members. They believed Vuyiseka was not properly cleaned after a teacher tested positive last week when most schools in the Western Cape opened. (Infectious disease experts say it is unnecessary to do special deep cleans that are being advertised by some companies; normal cleaning with standard products is fine.)

Mxolis Chibini, an SGB member said: “The District promised to do all the necessary precautions to make sure teachers and learners are safe, but so far nothing has been done.”

Parent Lulamile Qongqo said they believed the department when it announced that the school was ready to open. “We want our kids to get an education so that they can change their families for the better. That’s why we send them back to school, but what the department did is wrong,” said Qongqo.

A cleaner at Vuyiseka said she was one of the employees who cleaned the classrooms and the offices including the one used by the teacher who has Covid-19. “I don’t know how I am feeling because they knew about the result but they didn’t bother about telling us,” she said.

The Western Cape department’s Bronagh Hammond confirmed that the school was closed for cleaning and would reopen on Tuesday.

Schools are required to contact the district when notified of a confirmed case of Covid-19, she said.

In Mthatha, Madonisi Primary School, could not welcome back learners its 24 grade 7 learners on Monday.

The school had not received sufficient Personal Protective Equipment (PPE) for teachers and learners and is yet to get mobile toilets and water tanks.

The school had been without toilets for two years. GroundUp visited the school early this year and reported on plans to build new toilets. These were however put on hold because of the lockdown.

Madonisi has since confirmed mobile toilets were delivered, along with some cleaning material and water tanks. 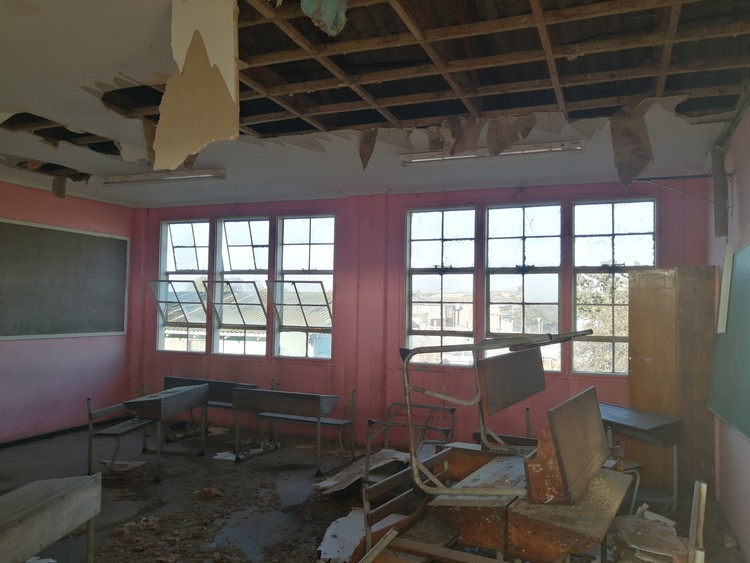 One of the many dilapidated classrooms at Greenville Primary, Port Elizabeth. Photo: Mkhuseli Sizani

In Port Elizabeth, grade 7 learners at Greenville Primary in Bethelsdorp were stopped from entering the school gates by parents and community leaders. Only 15 of the school’s 86 learners pitched up on Monday morning. The school has no water and is in a poor condition.

“We will only allow our children back to school when water and PPE are available,” she said.

Community leader Gabriel Machune Bloemendal said it was not a safe environment for teaching and learning as windows were broken and vandalism is rife because there is no security.

Principal Fredrick Joseph said: “We have been without water since February when our pipe burst. We informed the Department of Education District office but until now the pipe has not been fixed.”

Joseph said the prefabricated school was 42 years old and had regular water leakages.

“We used to have 800 learners, but now they have dwindled to about 400. This building was on the priority list nationally to be renovated. Education and infrastructure officials were here a few years ago and took pictures, but we don’t know why it is still in this condition,” Joseph said.

Loyiso Pulumani, spokesperson for the provincial education department, said the water pipe at Greenville could not be fixed during the lockdown and would resolve it soon.

“Other school problems will be attended to later because the focus right now is on Covid-19 to make sure water and sanitation is available at our schools. All the schools that are not ready should not open. So far we have delivered water tanks and toilets to 72% of our schools,” he said. 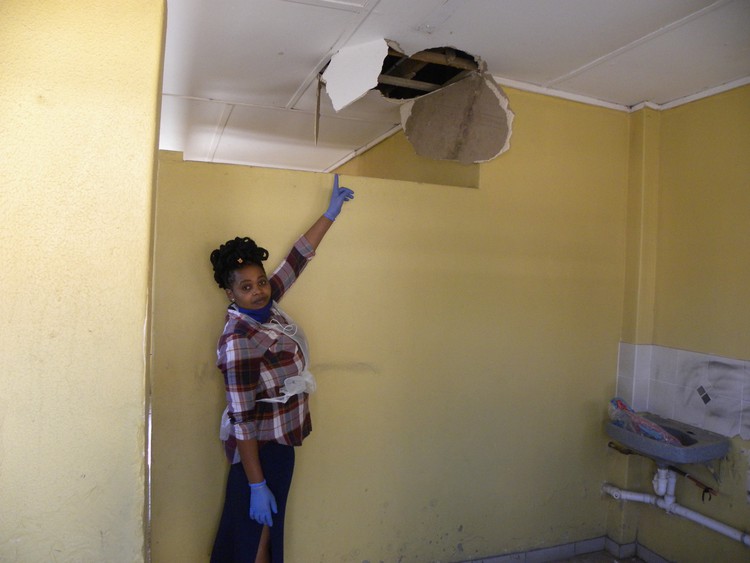 In Motherwell, the gates at Melisizwe Primary in NU10 also remained closed on Monday because the school had neither running water nor a security fence.

“We have water but the pipes and taps were stolen during the lockdown. There is no water supply to staff and learners’ toilets. A Jojo tank was stolen last year. It is disheartening that criminals continue to target this school,” said SGB member, Nwabisa Baxa.

She said cattle and goats were roaming in the school yard because the fence was stolen.

“We want to have the school fenced to manage movement of our kids. It is also easy to screen and sanitise them when they are entering the main gate. We can not expose them to the Coronavirus pandemic,” she said.

The department had not yet responded to questions at the time of publication. 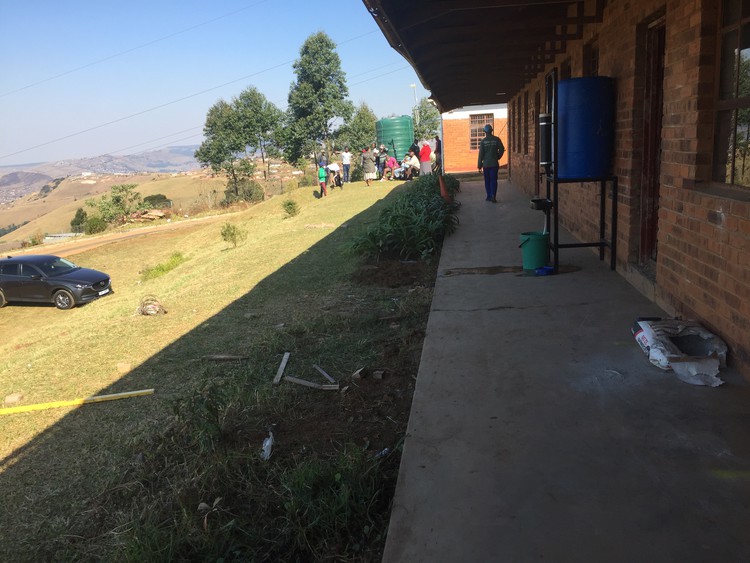 Teacher sit around one of the water tanks delivered by the provincial department last week to Insika High in Sweetwaters. The school building is still under construction and is expected to open on Thursday. Photo: Nompendulo Ngubane

In Sweetwaters, Pietermaritzburg, Insika High matriculants did not resume classes as expected on Monday. Learners who did show up were sent back home after concerns raised by the SGB members last week.

GroundUp had reported that the lack of infrastructure at the school would make it near impossible for teachers and learners to safely and adequately maintain hygienic practices as required by the regulations.

Last week KZN MEC Kwazi Mshengu visited the school. Mshengu confirmed that the school was not ready but promised that renovations would take place. Last week, a contractor started fixing the broken doors and windows.

SGB chairperson Sibusiso Ntuli said that only one classroom was adequately prepared for teaching. “While they are renovating there is noise and dust. How can teachers concentrate? It’s impossible. The school should be finished first,” he said.

“Our learners will come back when everything is being sorted out. We don’t know when the contractor will finish. If they finish on Thursday that means the learners will be able to return to school on Friday,” said Ntuli.

He said water and mobile toilets were delivered.

The department did not respond to questions by 5pm on Monday. 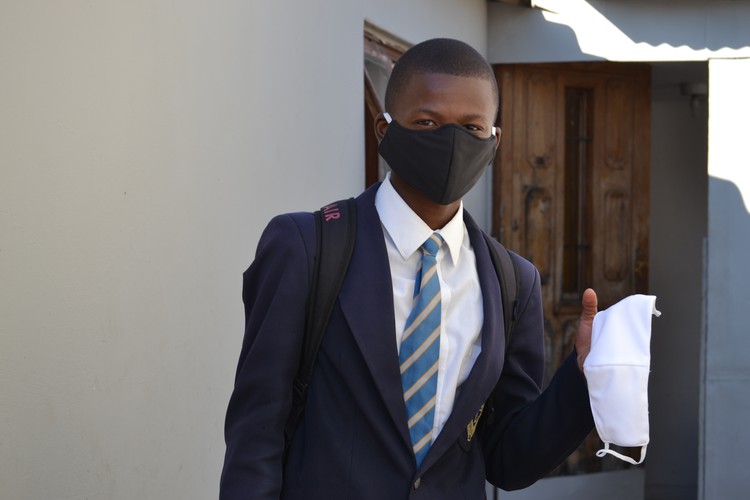 It was all system go for matriculants at Uitenhage High School. Matriculant Liyema Mlotana said he was given hand sanitiser three times on Monday.

“I was sanitised at the gate before they tested my temperature. During an interview about Covid-19 I got sanitised, and before entering the classroom again I was also sanitised. They even sanitised my school shoes,” he said.

He said the matriculants were first given a brief lesson on social distancing rules within the school’s grounds before being separated into classes of 18 learners each.

“We got two masks per learner, wipes to clean the desks where only one learner can sit. From now on we will wear uniforms only on Mondays and Fridays. Things have changed a lot,” he said.

In KwaNobuhle, Uitenhage, seven former learners of Stephen Nkomo Primary donated sanitisers and masks to the school. One of them, Lonwabo Bayeni, said: “Two of us are in the sewing and embroidery industry. We also brought 12 soaps and 62 masks for staff to promote protection and motivate them.”

Principal Zoliswa Njiyela said: “We want this environment to be hygienic. Despite the anxiety and confusion about Covid-19 and schools, we also appreciate the donation from our former learners. It was good to see our own product thinking about their roots. They gave us encouraging words and motivation.”

Njiyela said 73 grade 7 learners were expected to return when the school opens on Thursday or when repairs to its ablution facilities were completed.

Next:  The CCMA in a time of Covid-19: delaying and denying justice?

From quack claims about Covid-19 to outright forgery