Some families say they were displaced by flooding 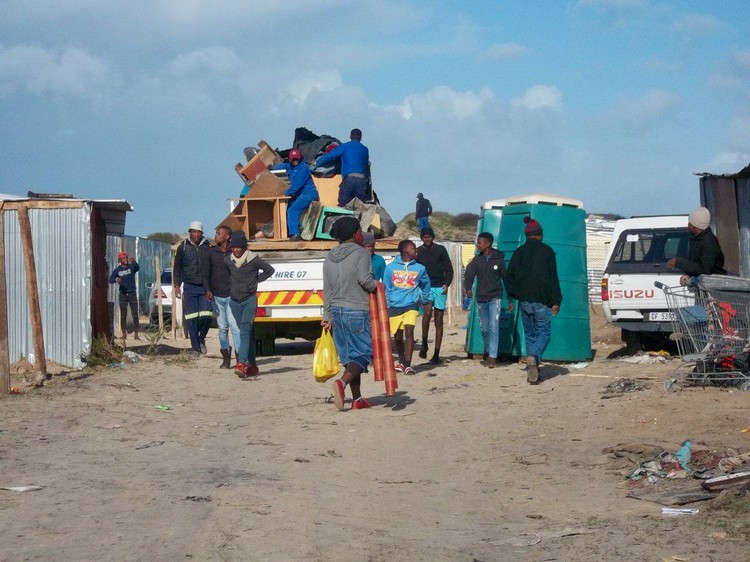 A new land occupation in Mfuleni has been underway since Thursday. Photo: Vincent Lali

On Tuesday, near the corner of Sax and Hindle roads in Mfuleni, dozens of shack dwellers were rebuilding their shacks after demolitions were carried out by the City of Cape Town on Sunday and Monday.

The extensive new land occupation started on Thursday. People were still arriving with overloaded trucks and bakkies and marking out fresh plots on Tuesday.

They came from Nyanga and Khayelitsha and nearby informal settlements such as Shukushukuma and Nyakathisa. Backyarders from nearby RDP houses were also dismantling their shacks and joining the occupation.

She said newcomers from other townships normally bring a letter from their local SANCO leaders stating who they are.

“We are wary of welcoming new people that we don’t know,” she said.

She said, “Our children have been staying in backyard shacks for ages. They also want a space.”

Ntoyabo said she was worried that space was not being left for roads. “Emergency services will not be able to have access,” she said.

On Sunday, GroundUp interviewed some of the new land occupiers shortly before officials arrived to tear down their shacks.

Community leader Nomxolisi Lentsa said no one had instigated the occupation. She said people were looking for dry ground as their shacks were flooded.

“Residents became fed-up with the City for failing to help flood victims and staying in wet shacks,” she said.

“We don’t have a rent problem because we stay in our own shacks in informal settlements. Flooding has forced us to build our shacks here,” she said.

Thuli James said she had been living with her three children in Tokwana Street, Extension 6, renting a backyard shack for R600 a month. A storm water drain nearby had flooded, spilling dirty water and faeces into her shack, she said.

“On Friday, I carried my baby on my back while my belongings were floating on water … The water dammed up to my knees,” she said.

She used her childrens’ social grants to place a R200 deposit on a shack worth R3,900.

She said she hadn’t taken the decision to relocate lightly. “If I had money, I would not stay in a place without water and toilets while I have kids,” she said.

Councillor Malusi Booi, Mayco Member for Human Settlements, said the City owns a portion of the adjoining land, but the main section belongs to Cape Nature. There is an interdict in place covering the nature conservation land.

Booi would not disclose how many shacks were demolished as this was “operational information”.

Next:  Children cross the Msunduzi to get to school

We were left much in the line of infrastructure by the previous regime. We were hoping for a better future, where we would share in the wealth and welfare of this rich land of ours. Instead, we are looted to the point of no return. We have greedy, inept folk in positions they know very little about. With all the money stolen from our tax payers and the Lottery, thousands of one or two-roomed houses could have been built for these people.

A man's house is his castle. What the heck happened? We are going the same way as the rest of Africa. We used to be the pride of Africa. When is enough ENOUGH? I want to see honest and caring people running our country. People of all races, colour, and languages. Give us at least decency again!

Police and shack dwellers clash over illegal connections in Gqeberha