“If we start a racial war in this country, it is going to help no one.”

Residents of Mitchells Plain and Siqalo met with MEC for Human Settlements Bonginkosi Madikizela, Premier Helen Zille, and other elected officials at the Lentegeur Police Station in Mitchells Plain on Thursday. The intention of the meeting was to resolve the conflict between the two communities that started on Tuesday evening. Protests in the area have turned violent and one person was killed when hit by a taxi.

Besides Zille and Madikizela, City of Cape Town Mayco Member for Informal Settlements Xanthea Limberg and MEC for Social Development Albert Fritz also attended. MEC for Community Safety Dan Plato chaired the meeting. Madikizela made a speech and dealt with most of the queries from the floor.

Siqalo community leader, Lundi Silolo, agreed that the violence and road blocks would stop as negotiations continue. “We know and understand that this is private land. We do not need houses. But what we need is electricity, water and sanitation. So the community decided to protest,” said Silolo. “It was not our aim to demolish everything and I apologise on behalf of the people of Siqalo.”

Madikizela proposed to create a committee of both Mitchells Plain and Siqalo community members to address the protest issues and other tensions that have grown since the Siqalo residents occupied the land in 2012.

Premier Zille said that the state was unwilling to buy the land Siqalo is on because it cannot be used to build houses (the property often floods). Also, Madikizela and Zille explained that City cannot provide electricity to Siqalo as it is private land.

According to Madikizela, the best that the government can do is relocate Siqalo to three pieces of land totalling 52 hectares, which can accommodate 1,000 people.

Land and electricity were the issues residents of Siqalo originally protested over. (Siqalo has more than 1,000 residents.)

Madikizela committed to addressing the issues in Siqalo. He apologized for the lack of communication but stressed that the Western Cape government must follow proper procedures. “The reason we took so long is because we didn’t want to seem to be incentivising people who seem to be jumping the queue and prioritise them over and above people who have been waiting for years,” Madikizela said.

Madikizela called on a police representative to respond, but the meeting ended before this could happen because shouting by residents prompted Madikizela and the other officials to leave.

There was racial rhetoric during the protests on Wednesday as well as during the meeting as some residents see the conflict as a coloured community against an African one. People Against Gangsterism and Drugs leader Abdus Salaam Ebrahim called for unity and a solution to what he sees as a systematic problem rooted in the economy, and divisions that were not properly addressed after apartheid.

“We must fight any injustice in the country not on racial lines and not on those who have and haven’t got. We must stand for what is right. We must say what is the problem of the country,” Ebrahim said. “If we start a racial war in this country, it is going to help no one.”

The meeting ended in confusion after government officials left, but another meeting between community leaders is planned for Saturday. 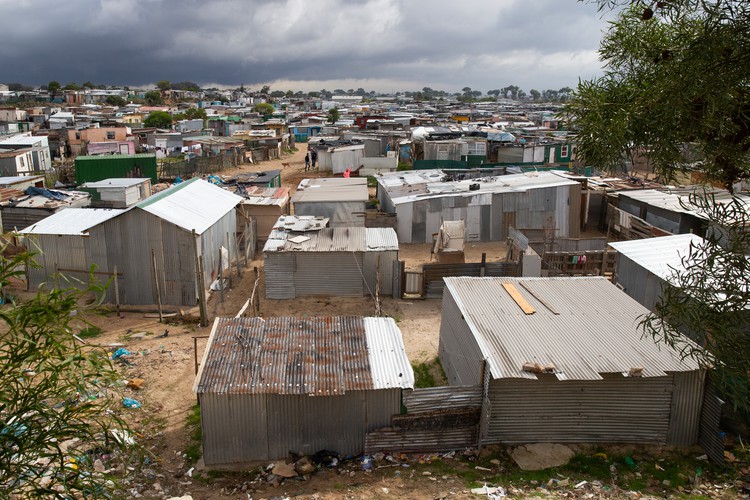 Siqalo is an informal settlement next to Mitchells Plain that started in 2012. Photo: Ashraf Hendricks