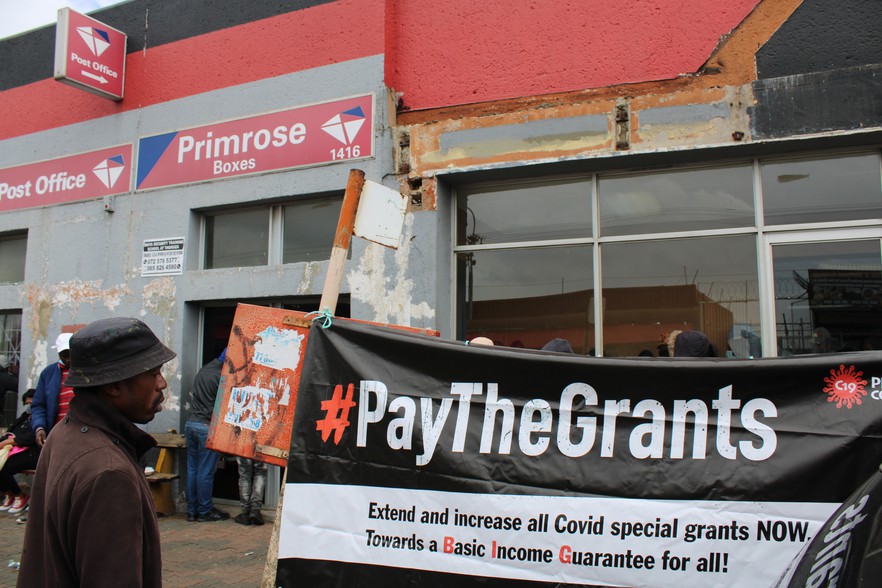 Many SASSA beneficiaries across the country appear to be having trouble accessing their grants following a “system glitch” at Postbank earlier this week. Archive photo: Masego Mafata

A mother who lives in a rural area in the outskirts of Johannesburg has made over 200 phone calls to post offices in desperate attempts to get her child’s social grant.

The mother, who asked to remain anonymous, has been phoning the South African Post Office since Monday to find out why she hasn’t been paid but the lines are constantly busy. She showed GroundUp a screenshot of her phone records which shows over 200 calls to the call centre number. Her current account balance is R25.

“You depend on that money being in your account on that date. You budget … It’s terrible … And then you hear on the news that the problem has been fixed by SASSA [South African Social Security Agency],” she says. The mother says she has had to borrow money from people.

However, her case is not isolated. She is among possibly thousands of SASSA beneficiaries who are yet to receive their grants this week.

The problem started over a week ago when recipients began reporting issues with accessing their grants. Postbank apologised to grant recipients in a statement on 3 November, urging them to collect their money at ATMs and retailers instead of post office branches due to a system glitch.

In a video on SASSA’s Facebook page from 8 November, Postbank CEO Lucas Ndala said, “The payment glitches started at some of the SAPO branches then the impact [of the glitch] extended to ATMs and some retailers. We managed to resolve the issue over the weekend. Most of the payment channels are working except at post offices where we are still experiencing some challenges. Work continues to resolve the challenge. We have already paid over 96% of grant beneficiaries. People mustn’t be alarmed, we are working on resolving this technical glitch.”

Evashnee Naidu, Black Sash’s KwaZulu-Natal regional manager, says that the Black Sash is still getting reports from around the country from people in desperate need of their grants. The organisation met SASSA officials last week to find out what was causing the issues.

Naidu says some of the beneficiaries’ accounts showed zero balances and others were not paid the full grant amount. She says that Friday seemed to be the worst day, child support grant beneficiaries accessing their grants through ATMs and retailers were also not able to access their money.

Naidu estimates that 500,000 beneficiaries prefer to get their grants in cash from SAPO branches.

Thobeka Mqhucshwa told GroundUp that she went every day since Thursday to check whether she could get her child’s grant. She went to retailers for a cashback on Friday, but the card was still not working. It showed a zero balance on Saturday when she went to the ATM. Mqhucshwa said she had no luck on Sunday or Monday. She was only able to withdraw the grant at an ATM on Tuesday, but it was short R75.

Another beneficiary, Nokhanyisa Mdudeki, has still not been paid. She went to Postbank on Friday and tried again on Tuesday at an ATM but her card still did not work. Because of the glitch, Mdudeki, who is unemployed, may not be able to pay for transport for her children. She still could not access her grant when she went to the post office on Friday.

SASSA and Postbank did not respond to GroundUp’s questions.

Previous:  “We begged them not to take our belongings”

I am also one of the desperate parents. I have been calling the post office toll-free number from Thursday morning till today (Monday) but the number is still busy. I don't know what to do. I was supposed to pay fees for my son in Grade R, but I missed the due date.