“My dog gets water every day but these people get it every second week,” says ward councillor 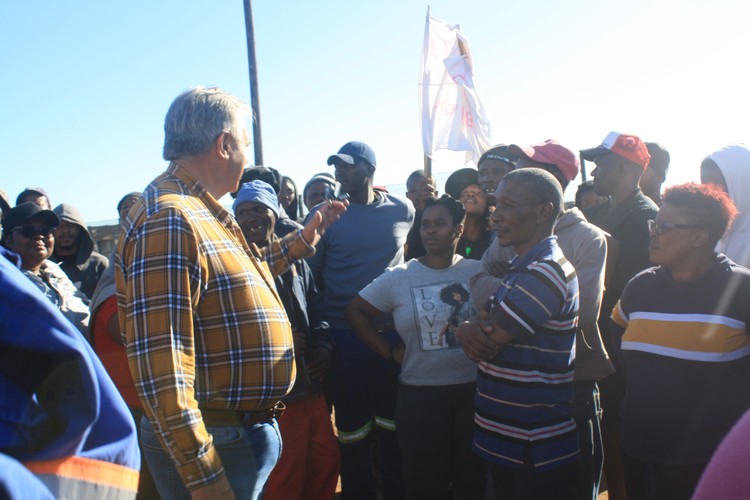 Ward 52 Councillor Frans Swanepoel with protesters from Bayland informal settlement in Gqeberha who shut down part of the R75 on Wednesday, demanding water, electricity and toilets. Photo: Thamsanqa Mbovane

About 200 shack dwellers from the Bayland informal settlement brought the R75 road to a standstill on Wednesday morning. They blocked the busy road with burning tyres and storm water pipes to demand that the Nelson Mandela Bay Municipality give them better access to toilets, running water and electricity.

Bayland resident Ntombizanele Ndoni says they moved onto the land in 2017 and approached the municipality for services to no avail. The roughly 2,000 shacks in the settlement share seven taps, but for the last three weeks there has been no water.

Ndoni said her children, like many others in the settlement, could not go to school because there was no water. “I didn’t wash today as well as my children, who didn’t go to school, due to dry taps.”

“At night, our children cannot do homework because it is dark,” Ndoni shouted as Ward 52 Councillor Frans Swanepoel (DA) arrived to calm down protesters. Police and metro police were present in numbers.

Another resident in the crowd accused Swanepoel of ignoring their calls, which he denied.

Swanepoel promised protesters that water would be delivered to the families later in the day. He blamed the previous municipal council for their plight.

Swanepoel told GroundUp a water truck came every two weeks. “It’s totally unacceptable to me as well. My dog is getting water every day but these people every second week.”

About electricity, he said, “That one is not a very easy one because there is a lot of planning that must be done. But the toilets are another important issue, because there are women and little ones in the settlement who use the bush even in the night.”

Municipal spokesman Mthubanzi Mniki said Bayland will be among 156 informal settlements to be formalised soon.

“We are trying by all means to provide everyone in the city with drinking water. But the drought that we are experiencing, is stretching our resources. We heard their complaint and we will follow up.”

Next:  Trapped in a waterlogged shack with her children during Durban floods