“Our children no longer care to see a dead body” 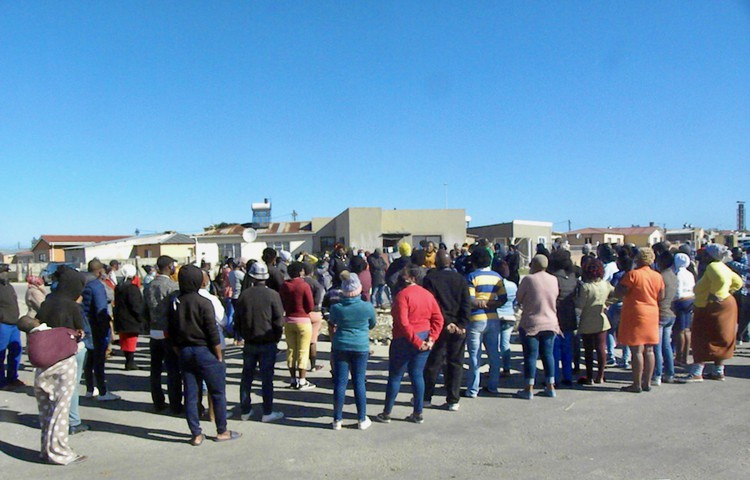 About 100 people gathered at the corner of Limba Road and Dubula Street in Port Elizabeth New Brighton to launch a community based anti-crime initiative. Photo: Joseph Chirume.

About 100 people gathered at the corner of Limba Road and Dubula Street in New Brighton, Port Elizabeth, on Sunday to volunteer to become street patrollers.

They said the New Brighton Anti-Crime Community Movement will not be a vigilante group. They pledged to work both with the police and the Department of Justice to ensure criminals are sent to prison.

“We decided to pull together our resources and assist our street patrollers,” said a spokesperson for the group, who wanted to be anonymous for fear of reprisals. “Every resident of this township who is a peace-loving person is welcome. People donated a minimum contribution of R5 per person.”

“The level of crime in this area is alarming and residents have come to a point to accept to live with it. We want to change that mentality and claim back our streets,” said one of the leaders who also wanted to be anonymous for fear of reprisals.

The spokesperson said, “Our children no longer care to see a dead body. They don’t even talk about it because this has become part of their lives. We want to change that mentality and allow our communities to live normal lives.”

She said they will form committees in all areas of New Brighton before they make one group where they will choose their leaders. She said there were street committees before, but these were not active.

Another resident said, “We will be working together as residents to identify and apprehend criminals. We will stop criminals in their tracks and we would want to stop any criminal activity happening here.

“We will work together with the police and surrender the suspects to them. We will do our best to collect enough evidence so that perpetrators of crime are convicted. It is also our objective to lobby the Justice Department to deny bail to suspects in rape and murder cases. Most suspects are released because of lack of evidence. We will do our best to ensure that doesn’t happen.”

“We have Community Policing Forums and we urge residents to work with them. We also discourage community organisations from taking the law into their hands by practising mob justice,” said Beetge.

While the anti-crime meeting was underway, a brazen criminal shoved a gun into this reporter’s waist and demanded my camera. I moved away from him as if nothing was happening, but he followed me, pointing to the barrel of his pistol.

The man then retreated to a house nearby. I quickly took off my jacket and together with the camera put them in my bag. The man then came out accompanied by two others. They failed to spot me as I had taken off the jacket. They went off in another direction and I quickly informed one of the organisers who escorted me out of the place.