No justice for assassinated Abahlali activists

Investigating officer claimed no knowledge of S’fiso Ngcobo’s case, hung up the phone, and blocked our number

Just metres from 28-year-old Phumzile Mkhize’s shack, perched on a steep hillside in the Durban informal settlement of eKukhanyeni, two bullet holes mark the wall of a local spaza shop where her late husband S’fiso Ngcobo was shot dead while buying cool drinks on 23 May.

Ngcobo was the regional chairperson of Abahlali baseMjondolo shack dwellers’ movement and a vocal critic of the ANC’s failure to provide housing for the more than 317,000 households estimated to be living in informal dwellings in eThekwini Metro.

In June 2017 Ngcobo had led an Abahlali land occupation in eKukhanyeni, formerly known as eMansenseni, and later helped to secure a court interdict against a private security company that repeatedly tried to forcefully evict residents.

“S’fiso had always been active in advocating for people’s rights ever since I met him,” Mkhize said, adding that Ngcobo had often told her he was willing to die for his community if necessary.

Almost four months since Ngcobo’s death, no arrests have been made, and Mkhize says she has been left in the dark about the current state of the investigation. George Bonono, Abahlali’s KwaZulu-Natal chairperson, says the organisation has not heard anything either from SAPS concerning the case.

When GroundUp called the investigating officer assigned to Ngcobo’s murder at Marianhill police station, which serves eKukhanyeni, he claimed to have no knowledge of Ngcobo’s case, hung up the phone and blocked us on WhatsApp.

A SAPS spokesperson subsequently told GroundUp that no murder case docket concerning S’fiso Ngcobo had been opened at Marianhill SAPS.

According to Bonono, who claims that more than ten Abahlali members have been “assassinated” since 2013: “Many of the cases where our comrades have been killed have happened in clear view and with damning evidence that is [then] erased and the cases don’t continue. Yet when we question this, the police tell us that the cases are still being investigated. Our people are killed and brutalised and receive no justice because even years later we are told the matter is still under investigation.”

In another case in eKukhanyeni concerning Samuel Hlole, who was shot dead during an attempted eviction by eThekwini’s anti-land invasion unit in June 2017, a SAPS spokesperson for eThekwini said that no docket existed for the case number Abahlali had been given.

Richard Pithouse, who has written extensively on Abahlali, told GroundUp that the police in KwaZulu-Natal are heavily influenced by “local power brokers” within the ANC and “sometimes even by the approval of more senior political figures.” Pithouse said such political interference contributed to “incredibly low conviction rates” in cases concerning murdered activists.

In the case of S’fiso Ngcobo, Abahlali believe that the local ward councillor for Marianhill, who is also named Sifiso Ngcobo, is behind the murder, alleging that he had threatened Ngcobo in the days immediately preceding his death.

The councillor dismissed such claims, saying that he had “nothing against Abahlali” and that the group merely “needed someone to pin S’fiso’s death on”. 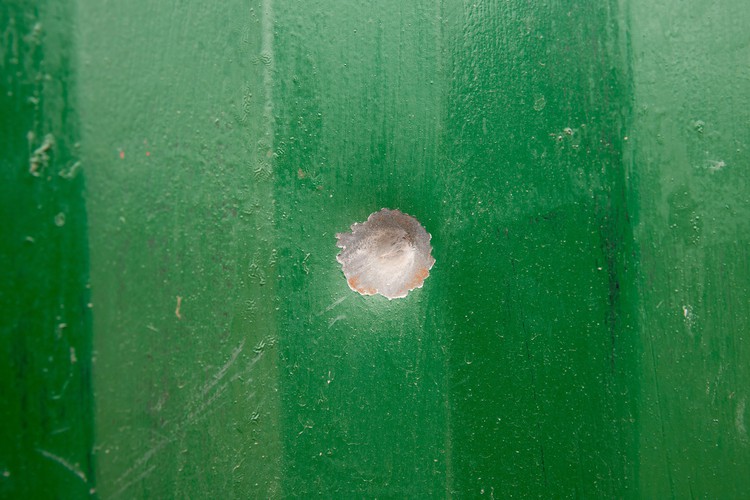 One of the bullet holes in the wall of the eKhukanyeni spaza shop where S’fiso Ngcobo was shot dead in May this year.

But allegations of broader ANC involvement in the murder of Abahlali activists are certainly not unfounded. In 2014, Abahlali’s KwaNdengezi chairperson, Thuli Ndlovu, was killed in her home by a hitman hired by eThekwini ANC councillors Mduduzi Ngcobo and Velile Lutsheku.

Ndlovu had been outspoken about the two councillors allocating housing to ANC members who were not from the area. The councillors and hitman were found guilty of Ndlovu’s murder and handed life sentences in 2016.

According to Bonono, this is one of only two murder cases involving Abahlali members where there have been arrests. In the other instance, a SAPS officer named Phumlani Ndlovu was sentenced to ten years in prison in January this year for killing 17-year-old Nqobile Nzuza, who was shot twice in the back while fleeing police during an Abahlali protest in the informal settlement of Cato Crest. 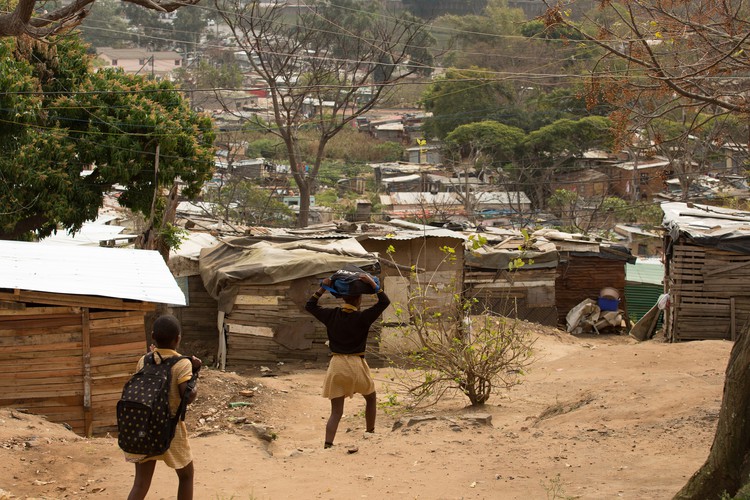 Children walk home from school in the informal settlement of Cato Crest on the outskirts of Durban.

But Nzuza’s family claim that Ndlovu has since appealed his sentence and was recently granted bail, adding that they were informed the case is due to go back to court in February 2019. Durban Magistrate’s Court could not be reached for comment on this matter.

Nzuza was one of of three Abahlali members killed in Cato Crest during the course of 2013, when there were an estimated 23 attempts to evict residents, who now make up approximately 1650 households, despite court interdicts prohibiting such evictions. Abahlali say that no arrests have been made in connection with the other murders.

“We know that in some of the killings there were high level political figures involved. That’s why those cases have disappeared,” said Thapelo Mohapi, Abahlali’s spokesperson. The mayor’s office failed to respond to multiple requests for comment on this article.

During this fraught period in Cato Crest, local Abahlali leader Nkosinathi Mngomezulu was also shot in the stomach several times by Gavin Le Cordier, a member of the anti-land invasion unit. Subsequently, Mngomezulu was handcuffed to his bed and kept under police guard while in hospital after it was alleged that he had attacked Le Cordier with a knife, a claim that he vehemently denies.

Discharged about a month later, Mngomezulu was taken into custody where he claims he was assaulted by police officers. He was released the following day without appearing before a magistrate. 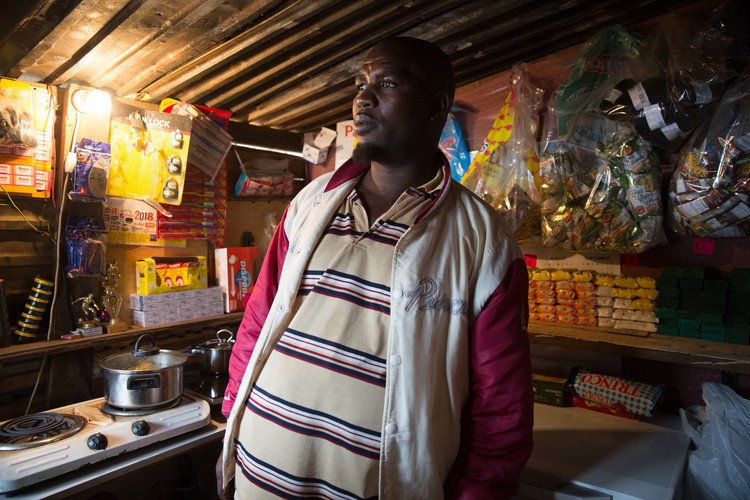 Nkosinathi Mngomezulu was shot in the stomach eight times during an attempted eviction in 2013 in Cato Crest.

In August 2017, Le Cordier was found by Durban High Court judge Dhaya Pillay to have acted in self-defence. Pillay also ruled that the police were liable to compensate Mngomezulu for unlawful arrest and detention. However, Abahlali told GroundUp that Mngomezulu is yet to receive any compensation and that they have had no updates on the matter since the court ruling. A SAPS spokesperson declined to comment on Mngomezulu’s case.

“My life has not been the same since the shooting,” Mngomezulu told GroundUp. “I had to go into hiding. I couldn’t work anymore. I couldn’t look after my four kids. I had to rely on the community to collect some cash to support me and my family.”

Mngomezulu, who is now subsisting on a small pension grant, still has to take a two hour round-trip to King Edward Hospital at least once a month to check on his injuries and change his dressings and a colostomy bag he’s had to wear since the shooting. “When it gets cold at night I still feel in a lot of pain,” he told GroundUp. 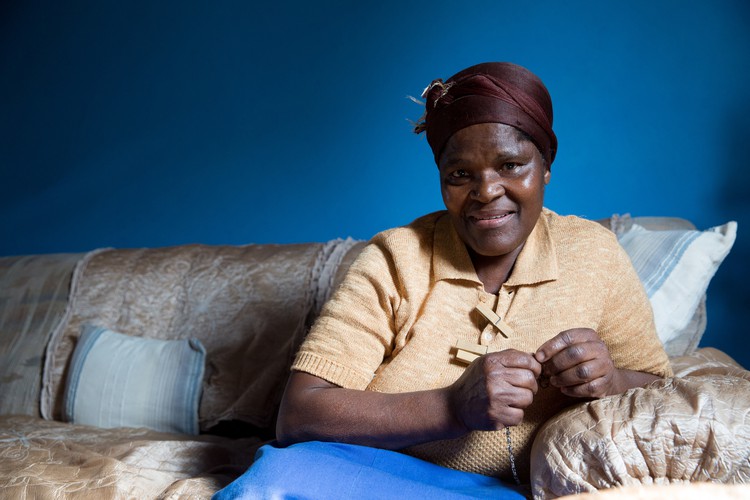 Thuli Ndlovu’s mother Gertrude says that “life has moved on” since two ANC councillors and a hitman were convicted of her daughter’s murder.

In July 2017, Mngomezulu was among approximately 75 Abahlali members in attendance when Abahlali’s general secretary S’bu Zikode gave testimony to the Moerane Commission of Inquiry concerning the alleged political nature of attacks on the group’s members and the subsequent lack of justice.

The commission was set up by KZN Premier Willies Mchunu in 2016 to investigate political killings in the province. But Mngomezulu and other Abahlali leaders believe that the commission was a “factional strategy” within the ANC and will have little bearing on cases concerning Abahlali.

According to Mark Shaw, a criminologist who has written on political violence in KwaZulu-Natal, “There needs to be a key institutional focus to change things in KZN, particularly within policing. The Moerane Commission is not enough.”

For Thuli Ndlovu’s mother Gertrude, there has been rare closure. Standing beside her daughter’s polished marble tombstone, which is in a shaded corner of her garden decorated with flowers and marked with the insignia of Abahlali, Gertrude Ndlovu told GroundUp that Thuli’s 21-year-old daughter has been “doing very well” since the 2016 ruling. She recently began training to be a primary school teacher. “Life has moved on,” she said.