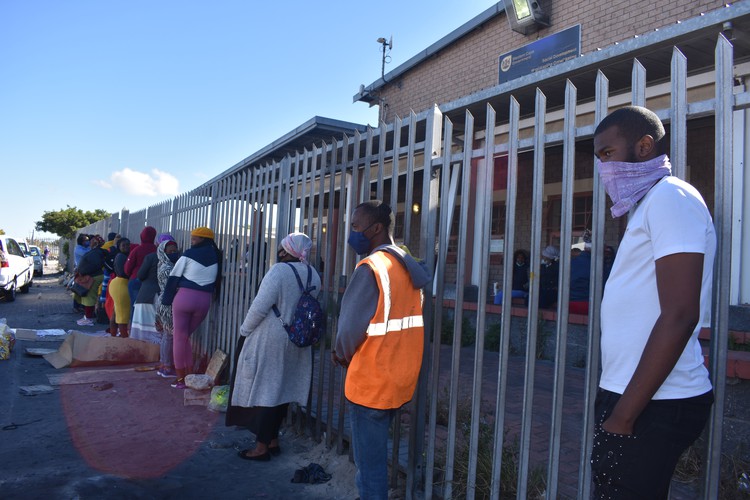 Welile Ndlambe with Bahle Ngqula of the Thumamina Sikuyele team stand in line outside SASSA offices in Gugulethu, Cape Town on Wednesday. Thumathina Sikuyele members say they charge R50 per person to queue and R10 for those they accompany to work. Photo: Buziwe Nocuze

“We are here to assist communities from waking up very early in the morning to go and stand in long queues at Home Affairs, SASSA, and the clinics,” says Bahle Ngqula, 21, from White City in Nyanga, Cape Town.

Ngqula is one of four men who started a business called, Thumamina Sikuyele, by queueing on behalf of their customers at facilities known for its snaking queues and long waiting times. They charge R50 per customer.

On a typical day they start lining up at 3am. “We were tired of just sitting in the township and not doing anything. I heard residents complaining about having to wake up early … Many visit these departments the whole week without being helped because of the long queues,” said Ngqula.

GroundUp joined Ngqula and Siyabonga Maganesi, 28, and 35-year-old Welile Ndlambe as they stood in line for SASSA clients in Gugulethu on Wednesday. “While we were busy with our clients, we got more people who were last in the queue. We will queue for them tomorrow.”

He said that there is a limit on how people they can queue for because the departments issue two queue cards per person. “We are planning to meet with security people to explain to them that we are working so at least they must give us three cards,” he said.

Maganesi told GroundUp that the money they make helps them put food on the table for their families. He said they charge R10 to accompany people walking to work early in the mornings due to high crime rates, particularly when it is dark.

Ndlambe said: “Our clients phone us and tell us where they want us to queue for them. If we can get bicycles we will even queue for them at the banks, but the challenge is transport. We are pushing and hoping someone will assist us.”

He said more unemployed young people should try and do things that will better their lives instead of choosing the easy way.

“Maybe we will have people in other townships because we have already received calls from people in Khayelitsha and Lower Crossroads just to mention a few,” he said.

Gugulethu resident Lindiwe Patuleni, 50, said she supported the Thumathina Sikuyel team. “We will support them because they are not robbing people, from now on I am going to use them whenever I want to go to places where there are long queues,” she said.

Next:  IPID investigating after police accused of assaulting woman

So SASSA can continue with poor services?

Yes, the unemployed guys will benefit from this, but what about those who can't afford even the R50? SASSA service is very poor, and no one seems to want to address the issue with our government officials. It looks like we have given up fixing this department.