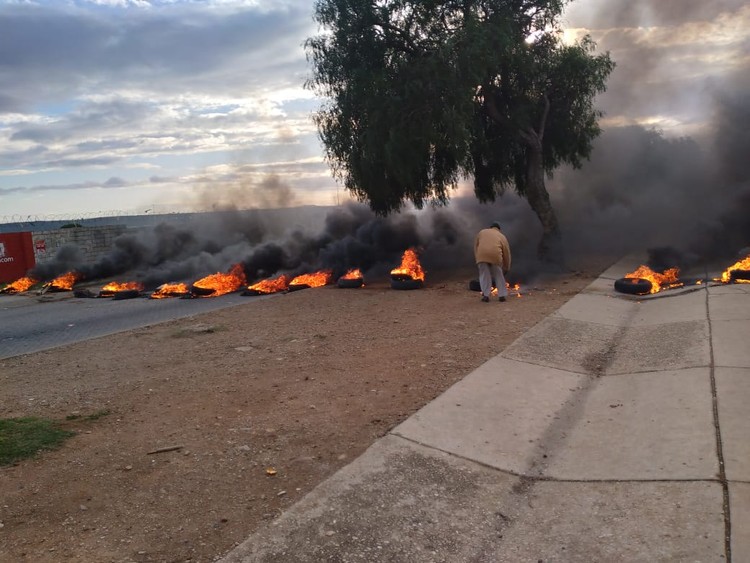 Protesting parents from Garrett Primary in Zwide, Gqeberha blocked the entrance and road to the school on Wednesday, demanding that the Eastern Cape Department of Education build a fence around the school. Photo: Mkhuseli Sizani

“The safety of our children comes first,” says Dikeledi Ngqola, deputy chairperson of the school governing body at Garrett Primary in Zwide, Gqeberha.

Ngqola joined dozens of angry parents who shut down the school by blocking the gates with burning tyres and rocks on Wednesday morning. They are demanding that a secure fence be built around the school.

On Monday we reported that parents blamed the Eastern Cape Department of Education for letting the school’s grounds go to ruins. They say countless pleas over the years for a fence have been ignored.

According to parents, the fence installation was meant to start in March. But the department told GroundUp that it is still in the planning phase for the fencing and that it cannot give a time frame for when this will take place.

On Wednesday, protesters also blocked the busy Johnson and Van der Kemp Roads. Learners and teachers were not allowed into the school. We were informed that the police had to disperse protesters.

Ngqola said parents are upset that the department did not want to commit to a date for the installation. “When we protested on 21 February, the department said the project will start in March until June. But now they are telling us about a process. A process could take one or two years,” she said.

“Our children don’t have breaks. Teachers can’t rest because they have to guard our children all the time. We don’t care about the two Community Police Forum members that have since been placed at the school. We want a proper learning environment, not this dumping place,” she said. Ngqola said they will protest until they see the contractor on site.

Malibongwe Mtima, provincial education spokesperson, said that parents had misunderstood their previous communication about the fence. “They thought the date on the letter was the date for when fencing would start. Garrett is one of 19 schools identified for construction around Nelson Mandela Bay District.

“The delay was caused by the handover from Coega to the education department due to budget constraints. But the department has agreed to do the work, guided by available budget.” Mtima said officials would meet soon to assess whether there is money available for the fence.

Sex workers are angry with the Gender Commission. Here’s why