“How must we sleep now? On glass, on sand, on bricks, on garbage? They took everything from us.”

Violence broke out after land occupiers’ shacks were demolished and removed along Prince George Drive, in Cape Town’s south peninsula, on Wednesday morning by government contractors.

Protesters set tyres, couches, garbage bins and two tall trees on fire to protest against the demolitions. At midday at least six fires were burning on the streets bordering Parkwood. 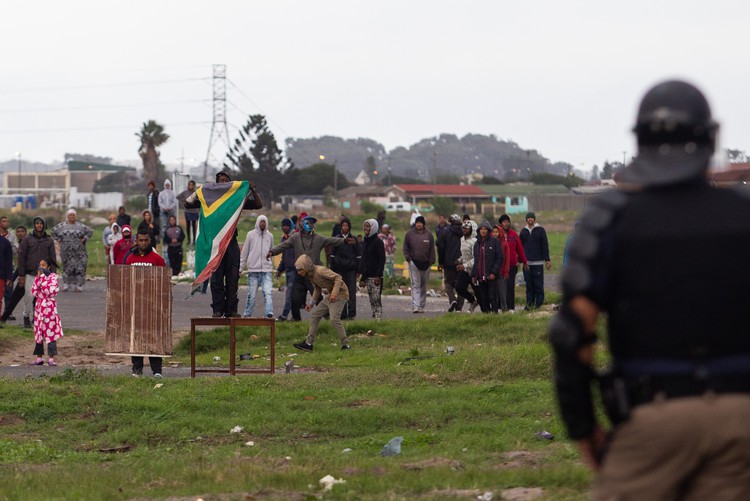 A protester wraps himself in a South African flag during a face-off with police officers.

The demolitions occurred the day after Western Cape Department of Human Settlements Minister Bonginkosi Madikizela warned Parkwood residents that people would not be allowed to occupy the land. Residents had fought with police on Sunday after police removed people from the occupied land. 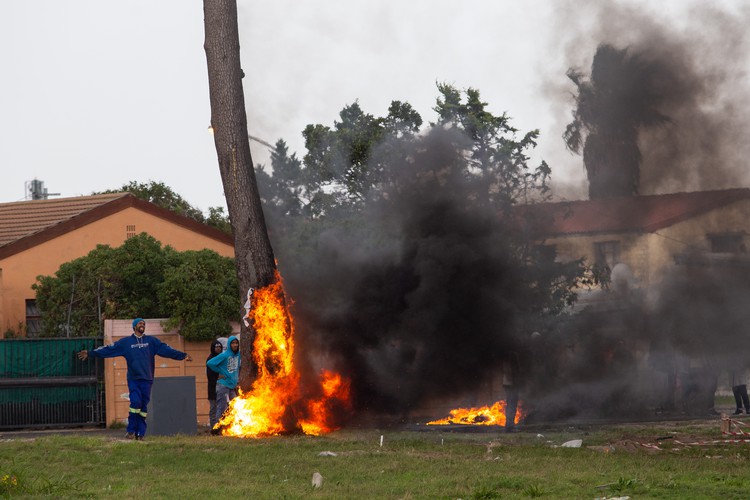 A tree is set alight by protesters.

Pockets of conflict erupted on Wednesday as groups of protesters formed lines, throwing rocks at police. The police formed their own line and shot rubber bullets when protesters approached. Police also used armoured vehicles, tear gas and water cannons to disperse the crowd. One police officer shot into Gerda Court residence courtyard after a protester threw rocks at him from beyond the walls.

The chairperson of the Parkwood backyarders’ association, Dominic Booysen, 54, said he had tried to negotiate with a policeman, “but he chased me away and said they had come here to do a job.” Booysen said he was later shot in the face with a rubber bullet during the conflict. He had blood running down his cheek. 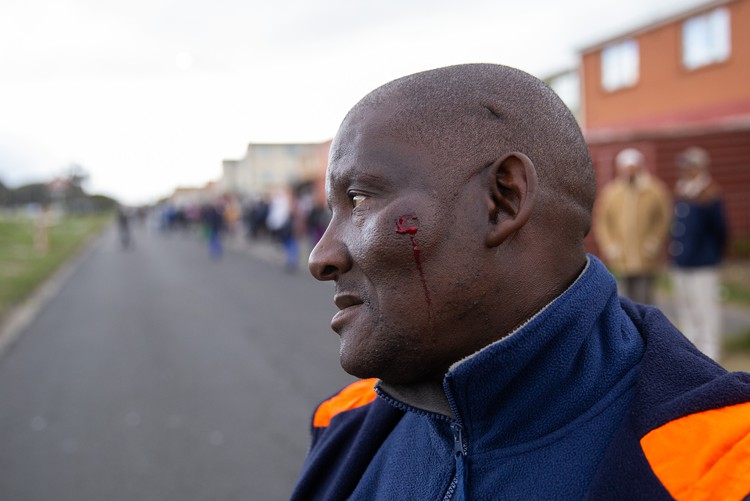 Dominic Booysen was shot in the face with a rubber bullet.

Abdul Gamiet, 50, a Parkwood community leader, said the occupiers would not back down. “They will put up shacks again.”

“This land has been standing here for decades, unused. No community facilities, houses, parks, nothing. The population in Parkwood has grown and there is no space anymore here,” said Gamiet.

Jade de Wee, a mother who built a shack on the land for herself and her two children, said that the police had thrown out the last of her food along with materials for her shack.

“How are my children supposed to eat?” de Wee said. “How must we sleep now? On glass, on sand, on bricks, on garbage? They took everything from us.”

“They came with force to take the people down,” said Rosemary Beukes, 62, who has been living in Parkwood for 49 years. “We sleep about eight people in one room, and if we try to put a place up for our children on the premises where we live? We are not even allowed to do that. So what else can we do?” 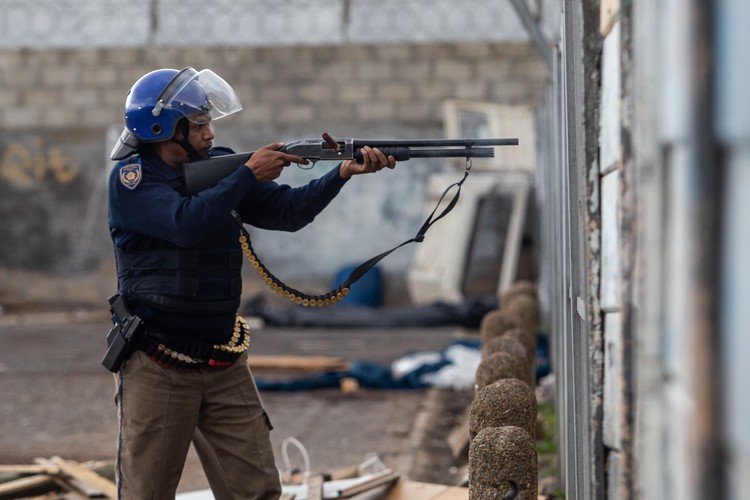 A law enforcement officer fires into a courtyard at protesters.

Jonathan Ghaal, another of the occupiers, said he had gone out early in the morning to collect nails to reinforce his shack but when he came back it had been removed. “I have two sons and one grandchild, they live with their mother in one of the courtyards in Parkwood, but I am homeless.” He said he had been on the street for four years. “I hoped that this would be a chance for me to make a home.”

“111 illegal structures have been demolished and we have taken away 7 truckloads of building materials,” said City law enforcement spokesperson Wayne Dyason. “17 protesters have been arrested for public violence and taken to Grassy Park Police Station.”

Dyason said the situation was “still unfolding” and SAPS would continue monitoring the scene. 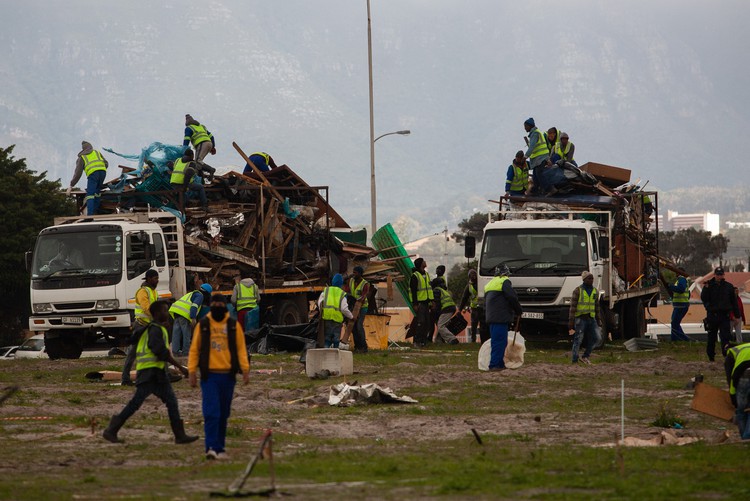 Building materials from the demolished shacks are taken away in trucks.

Parkwood resident Chenoy Morris said police had said they could not demolish shacks with furniture inside. “But there was furniture and they did anyway. Now we have no beds, no blankets.”

Dyason said, “A court order wasn’t required in this case because the people were not living there, so according to the PIE Act (Prevention of Illegal Eviction from and Unlawful Occupation of Land Act), the City can remove the occupants.” 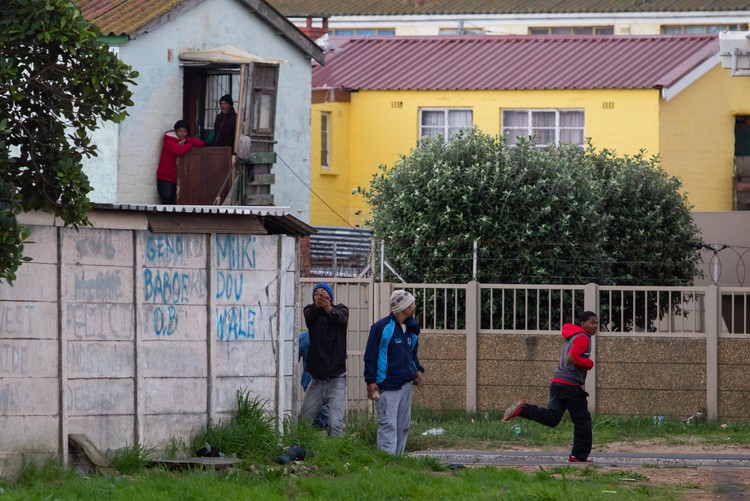 A protester pretends to fire a gun, prompting police to take out pistols. 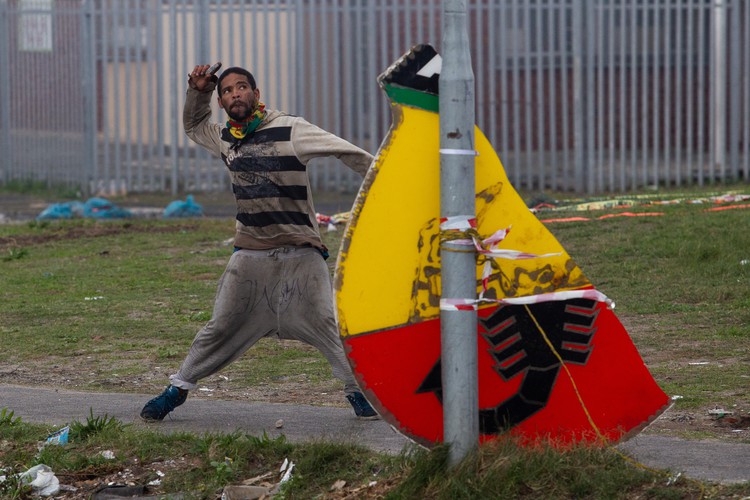 A protester throws a stone towards law enforcement officers. He was arrested.

Next:  Another Abahlali activist shot dead

Previous:  “When will we black lesbians live freely in our community?”