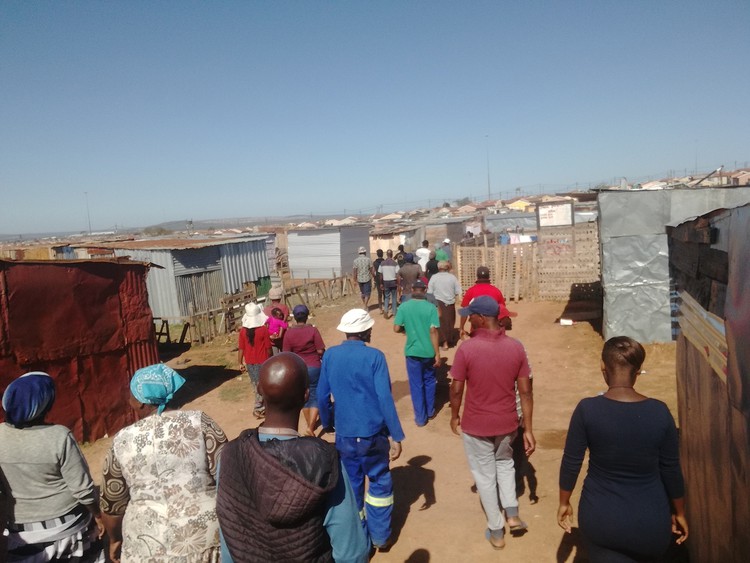 Angry shack dwellers in Uitenhage set off to deal with a man suspected of stealing a cellphone on Wednesday afternoon. Photo: Thamsanqa Mbovane

About 100 residents in Bobani Village informal settlement, Uitenhage, destroyed the shack of a man they suspected of stealing a cellphone, on Wednesday afternoon.

The man, in his late 20s, was accused of robbing a man with a broken leg at knifepoint on Sunday evening. Residents immediately went searching for him. They were later tipped off as to where he lives.

The vigilante group, which included elderly persons and children, found the suspect drinking a beer and smoking a cigarette in his shack.

Committee chairperson of area 11, Luyanda Manyamu, asked the man if he had stolen the phone and he said he had. Manyamu then left.

Looking obviously terrified, the suspect said he sold the phone for R100. (The owner of the phone said it was worth about R700.)

Residents beat the man, tore down his shack and told him to permanently leave the settlement. They then paraded him through the streets of neighbouring Duduza, to the house of the person he had said he’d sold the phone to. When they discovered he had lied about this, they beat him again.

Police rescued the man, now bleeding, and sped off with him in the back of one of their vans.

Bobani Village is home to about 3,000 households and was formed in January 2019 by land occupiers from all six wards of KwaNobuhle. People suspected or caught committing crimes, including rape and muggings, are routinely dealt with by the community. The police are almost never called. The community view is that criminals who are arrested are usually released within a few days, return to the area, and continue with their criminal activity.

Manyamu said the community was busy clearing the area of criminals. “We took a stance that people who rob or do any dirty thing here must leave this place … The man has not yet come back to take his broken down shack material. Nobody will touch his belongings and that is the norm here; hands off other people’s things.”

Police spokesperson Captain Gerda Swart confirmed the incident but condemned the mob justice. “It is illegal for people to take the law into their own hands … Police will always be visible in the area,” she said.

Next:  Backlog of over 19,000 disability grant applications since lockdown