Medical aid and pension funds have not been paid 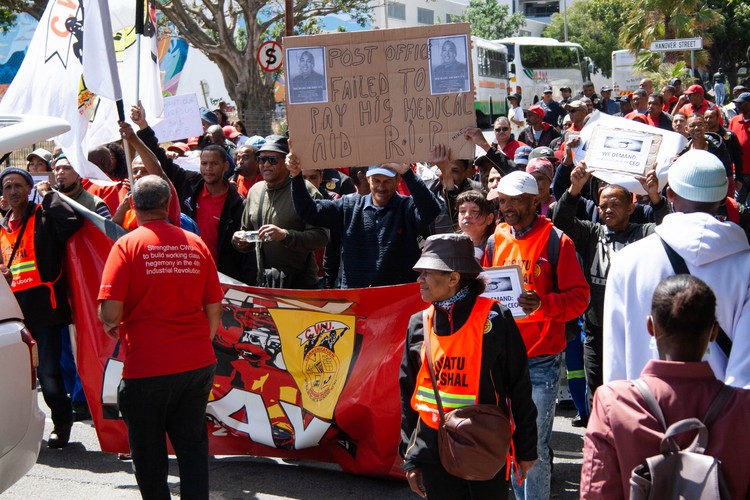 About 60 workers under the banner of the Communication Workers Union marched to Parliament on Thursday demanding that their medical aid and pension fund contributions be paid. The South African Post Office is facing a financial crisis. Photo: Liezl Human

About 60 workers, under the Communication Workers Union (CWU), marched to Parliament in Cape Town on Thursday, demanding that their medical aid and pension fund contributions be paid. The Post Office is facing financial woes. In some cases, these contributions have not been made for years, according to the Post Office’s own estimates.

A memo handed to representatives of the Post Office and the government, includes demands that: there be no salary cuts; a 15% salary increase; no cut in working hours; the CEO to resign; and that the Post Office should pay all medical aid and pension contributions.

Riedewaan Vermeulen, provincial chairperson of CWU in the Western Cape, said they anticipate that the Post Office won’t meet their demand for a 15% salary increase, but it should at least be willing to negotiate.

“They’re not even doing that. We’ve written to them, we want to negotiate, but they are refusing to do that,” said Vermeulen.

On 6 November, COSATU announced that the Post Office would retrench about 6,000 workers due to its financial troubles. According to the CWU, the Post Office says it does not have money to pay workers’ salaries. Some workers could have their salaries reduced and working hours cut, or be retrenched.

Vermeulen said there have been robberies at many post offices which do not have proper security measures in place. He said in some branches the working conditions are bad, with no working toilets, leaking roofs, no electricity, and cases where workers have to bring their own toilet paper to work.

Vermeulen said that because the medical aid contributions were not paid, over 9,000 workers are without much-needed medical services.

Aubrey Zwelingani, a postman from Matroosfontein, told GroundUp that the medical aid contributions are still being deducted from their salaries, despite the Post Office not paying it to the fund.

Zwelingani said they haven’t received a salary increase for over three years. “My family depends on me. Almost ten people depend on me … We are unhappy with what’s going on,” he said.

Louis Petersen, who has worked for the post office for over 30 years, said he worries that all the talks about retrenchments and salary cuts are happening “behind the scenes”, and that workers have not been told what the government’s plans are for the Post Office.

Post Office spokesperson Johan Kruger confirmed that the Post Office received the union’s memo. “CWU is an important partner in business for the Post Office. The Post Office will go through the memorandum in detail and respond to the union as soon as possible,” he said.

Kruger said that the Post Office is in talks with the government for financial support. “The Post Office provides certain services, such as a postal service in rural areas and paying out social grants, at a substantial loss,” said Kruger.

The National Education, Health and Allied Workers’ Union (NEHAWU) said in a press statement on Thursday it supports the workers and CWU’s protest, and the “genuine demands by workers for better salaries and improved working conditions”.

Next:  Ocean View teen to represent SA at African badminton tournament in Mauritius

Previous:  Trial of officer accused of murdering a homeless man set for next February