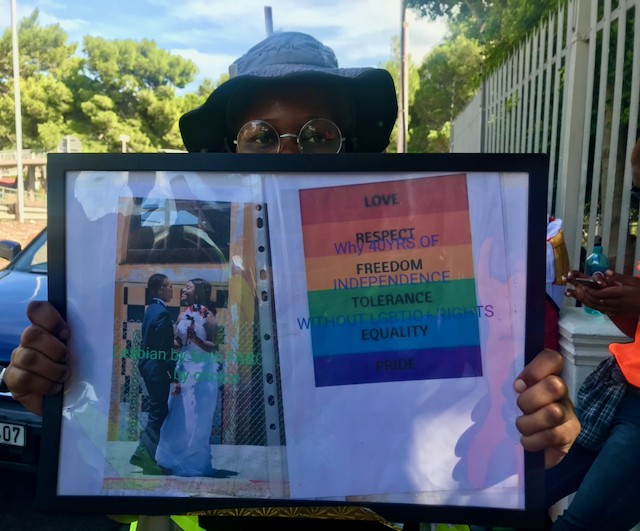 Archive Photo of a gay rights protest at the Zimbabwean consulate in Cape Town in April 2021. Photo: Tariro Washinyira

A report released on Thursday by several civil society organisations has found evidence that LGBT refugees are being denied asylum in South Africa despite being “eligible for protection under international and domestic law”.

The authors of the report surveyed denial letters for 67 asylum applicants who had applied for asylum on the basis of sexual orientation or gender identity (SOGI). The letters were written by 32 Refugee Status Determination Officers (RSDOs) in Cape Town, Musina, Gqeberha and Pretoria between 2010 and 2020.

Amy-Leigh Payne, attorney at the Legal Resources Centre (LRC), summarising the report findings, said that the Refugees Act requires South Africa to extend protection to people who have a well-founded fear of SOGI-based persecution.

The report identifies among others the following discriminatory practices by Home Affairs officials: the use of stereotypes about sexual and/or gender minorities to justify denials; displays of bigotry or hostility, evidenced by the use of derogatory language in official documentation; and a high proportion of credibility concerns raised about applicants’ identities rather than their asylum claims.

In one egregious case the RSDO found that a Zambian asylum seeker could not be “a gay” because he claimed he experienced pain when he was raped.

The report found some RSDOs “seem unaware that SOGI-based persecution is accepted grounds for asylum, or that sexual and gender minorities constitute a protected social group under the Refugees Act”.

Asylum claims were therefore denied on the grounds that they were “manifestly unfounded”. One of these was Ethan Chigwada’s application. Originally from Zimbabwe, he applied for asylum in 2018. He came to South Africa in 2014 to visit his boyfriend. A video of them went viral in Zimbabwe, after which his parents rejected him and the Zimbabwean authorities started to look for him.

The report found that during the interview on the first day of his application the RSDO asked Chigwada what had happened to him before he left the country. He explained that nothing had happened, but that was because he had not identified as openly gay back home. He feared his community would kill him.

The RSDO concluded that his application was made on other grounds than those which can be made in terms of the Refugee Act.

This was factually incorrect says the report. “High levels of social stigma and the presence of anti-LGBTI+ laws are both well documented in Zimbabwe.”

On Thursday, Chigwada told GroundUp that he was given 30 days notice to appeal in 2018, which he submitted on time. He lives in Cape Town but since then he had been going to renew his papers every two to six months in Gqeberha, until the Covid-19 lockdown started. (Since the closure of the Cape Town Refugee Reception offices in 2012, refugees can only renew their permits at the offices which issued them.)

He is still waiting to be called for an interview.

“My life is on hold. I applied to Stellenbosch university but they want a valid document. My bank account was once frozen and there is no guarantee that it won’t happen again. Employers don’t give you a job with a document valid for less than three months,” he said.

“Many LGBTI refugees cannot find work … Others cannot find housing or are evicted from their housing without cause, due to landlords who discriminate against them. They are also denied medical care at state hospitals because of lack of documentation and turned away by police or government agencies when they seek recourse for discrimination or violence against them.”

He said they had received complaints of mistreatment of gay asylum seekers by Home Affairs officials.

The report was compiled by the Legal Resources Centre (LRC), the Women’s Legal Centre (WLC), the African LGBTQI+ Migration research Network (ALMN), and People Against Suffering, Oppression and Poverty (PASSOP).

Despite repeated attempts, we have been unable to get comment from Home Affairs.

Next:  Cape Town firefighters fear they will be fired

Previous:  Life after a devastating fire in Cato Manor’s Marikana