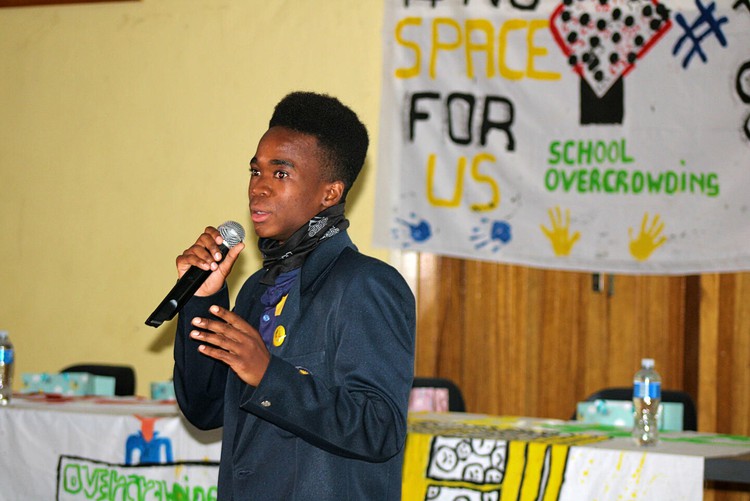 Percy Kgalakgadi is a grade 12 student at a school in Etwatwa, Ekurhuleni. He said overcrowding in schools in Etwatwa has compromised the quality of education. Photo: Masego Mafata

Research by Equal Education has found that over 70% of classes in schools in a Gauteng township which they inspected are overcrowded. The findings from the report were discussed during the launch of their #NoSpaceForUs campaign on Saturday in Etwatwa, Ekurhuleni.

The campaign follows years of advocacy by Equal Education to get the Minister of Education to get all schools to meet a minimum standard of infrastructure. On 29 November 2013, the Norms and Standards for Public School Infrastructure policy was included in the South African Schools Act by Basic Education Minister Angie Motshekga. This policy defines the basic infrastructure every school must have to function properly.

Between September 2019 and June 2020, Equal Education surveyed nine schools in Etwatwa, Ekurhuleni. The researchers collected data on 751 classes, measured and inspected 105 classrooms, and interviewed 51 school community members. The report of the survey was published on Monday to mark the eighth anniversary of the adoption of the Norms and Standards.

According to the report, a class is overcrowded when its size limits “teachers’ and learners’ ability to create an effective learning environment”.

Nicola Soekoe, author of the research report, said government data suggested that there was no overcrowding in the nine schools. On average, teachers have 30 learners.

But, there’s a discrepancy between what is actually happening in schools and the government’s data. The government data does not take into account that classes are often split up unevenly based on subject choice and language preference, said Soekoe.

Equal Education members, known as equalisers, described their experiences of overcrowding in schools in Etwatwa during the campaign launch.

One equaliser said that when he was in grade 8, he had to run to classes to make sure he got a desk and a chair. “Some teachers would shout at us for leaving their classes early to get to another class in time to get a seat, but we didn’t have a choice,” he said.

Some equalisers also said they had been turned away from exam venues because there was not enough space for them to write.

Many of the schools in Etwatwa are affected by a lack of equitable distribution of staff and resources, Equal Education found.

The report calls for the Department of Basic Education to develop binding school capacity norms that take into account the number of teachers, class sizes, classroom sizes and quality of the school’s performance, among other factors.

The report also recommended that the Gauteng Department of Education should create an infrastructure plan to accommodate growing learner populations. The provincial government must allocate money to address overcrowding. Teachers and staff should be placed equitably in schools where they are needed most.

Gauteng deputy director-general of education support Vuyani Mpofu was at the launch. He said the department is aware of overcrowding problems. He said budget constraints prevent the department from addressing the problem.

“Currently, we need about R30 billion to deal with overcrowding and this number will grow per year,” he said.

Mpofu said he would take the recommendations back to the department and then provide feedback. He did not commit to a deadline.

Next:  Delft landlords battle as power outages chase tenants away

Previous:  The minister, the Lottery boss and the luxury R5.6 million home

Striking Clover workers to get overdue bonuses by Friday

What happened to the Lottery money paid to fund games for intellectually impaired athletes?