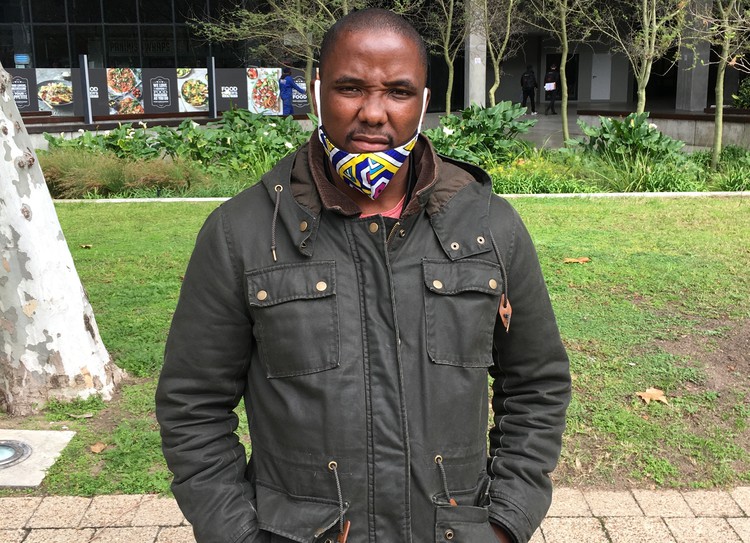 Bulelani Qolani is in court against the City of Cape Town. Archive photo: James Stent

Friday saw the second day of hearings in the matter between the South African Human Rights Commission (SAHRC) and others versus the City of Cape Town and the South African Police Service, with the Economic Freedom Fighters (EFF) as intervening applicants.

The case was brought by the SAHRC following a string of contentious demolitions and evictions by the City of Cape Town in recently-occupied informal settlements. The removal of Bulelani Qolani from his shack by City officers while naked was particularly widely covered in the media.

Advocate Norman Arendse, the senior counsel for the SAHRC, activist group Housing Assembly and Qolani, argued on Thursday for an interdict that would (1) prevent the City from evictions and demolitions without a court order (or supervision of the courts) while South Africa was in a state of national disaster; (2) compel SAPS, if present at the site of a demolition or eviction, to act to prevent illegal action, whether from the City or contractors, or those affected by the demolitions or evictions; and (3) to interdict previously granted eviction interdicts.

The case was delayed twice previously, on 15 and 24 July. On the latter date, and after the EFF joined as an intervening party, Justice Derek Wille found that the complexity and volume of the record merited the attention of two judges.

Justices Shehnaz Meer and Rosheni Allie presided over the past two days and will now decide whether or not to grant the applicants a temporary interdict. Then in October two further sittings are scheduled for a final interdict to be considered.

Advocate Tembeka Ngcukaitobi, counsel for the EFF and the community of Mfuleni, supported the SAHRC’s application in the main, and made submissions for the return of building materials and compensation for belongings damaged in Anti-Land Invasion Unit (ALIU) operations.

Advocate Sean Rosenburg’s submissions for the City began yesterday, and continued today. The City argued that its demolitions only relate to unoccupied structures, and that no court order is required when it carries out these counter-spoliation operations. Arguing against judicial oversight, the City argued that “irreparable harm” would follow if judicial oversight was required for all demolition action by the ALIU.

The City argued that the applications for interim relief sought to impose a final order on a temporary situation, or an interim interdict for an extended period - that of the state of national disaster - which was not suited to the hearing. The City also argued that what the applicants were seeking was the development of the common law in relation to counter-spolitation, which was outside of the scope of this matter.

Advocate Renata Williams, counsel for SAPS, also opposed the applicants. She argued that the relief sought - that the police fairly prosecute their duties - was not needed, and that the applicants should have sought an interdict against the sheriff instead. Judge Allie pressed SAPS on this matter, suggesting that the experience of many people was that SAPS was always deployed in support of the ALIU, regardless of any illegality that the ALIU might perpetrate.

Arendse in his reply to SAPS said that regarding the Qolani matter, SAPS had displayed “shocking lack of empathy”.

“We have not heard from police that they have conducted an investigation … nothing has been said from the police that this kind of treatment is unacceptable, and that the perpetrators of the crime will be brought to account and arrested. The City has engaged in unlawful behaviour and intends to continue to do so - demolished and evicted without court order. Yet though SAPS have been present, they have not intervened to prevent these unlawful actions. SAPS is regularly present when ALIU demolishes. Now, SAPS come and say it’s nothing to do with us. This should concern the court: when people say nothing, it means a lot.”

Arendse also said: “The City has become a judge in their own cause. They take the law into their own hands, and decide who to evict, what constitutes a home, what constitutes a resident. This is not helped by the terms of the tender that the court has seen which encourages this kind of uncontrolled illegal conduct - there is no guidance given. We haven’t seen any directives or guidelines for what is occupied and what is unoccupied.”

Arendse said that the egregious treatment of Qolani showed that there was an endemic problem with culture in the City’s Law Enforcement, and this was not simply an isolated incident. “‘A few bad apples’ is no defence,” said Arendse. “It’s all of them - from the mayor all the way down to the ALIU officials.”

In his reply, Ngcukaitobi said that the EFF argued, with reference to the evidence of recent ALIU operations and City’s own records, that the ALIU operates with a worrying degree of arbitrariness. “When a City decides when a structure is occupied or unoccupied their policy is opaque, and directed by the fantasies of the officials on sight … the City’s rights as owners of property is not outside the constraint of the rule of law.” Ngcukaitobi said that the City could not provide evidence that there was a “reasonable, rational constitutionally-constrained way for them to evaluate whether a structure was occupied or unoccupied.”

Ngcukaitobi said that an interim interdict would minimise tensions in eviction and demolitions, as court supervision may minimise the potential for social conflict. Against the City’s assertion that such an interdict would lead to more occupations of land, Ngcukaitobi said: “Invasions or incursions are happening at a rapid pace, with or without judicial oversight - it is happening with or without the court… [An interdict] would ensure that it is not a metro officer who will decide whether you have a home today.”

Judgment was reserved by Justices Allie and Meer, but it was indicated that a reasoned judgment on the interim interdict would be delivered soon due to the pressing nature of the matter.

POPI Act: confessions of a convert