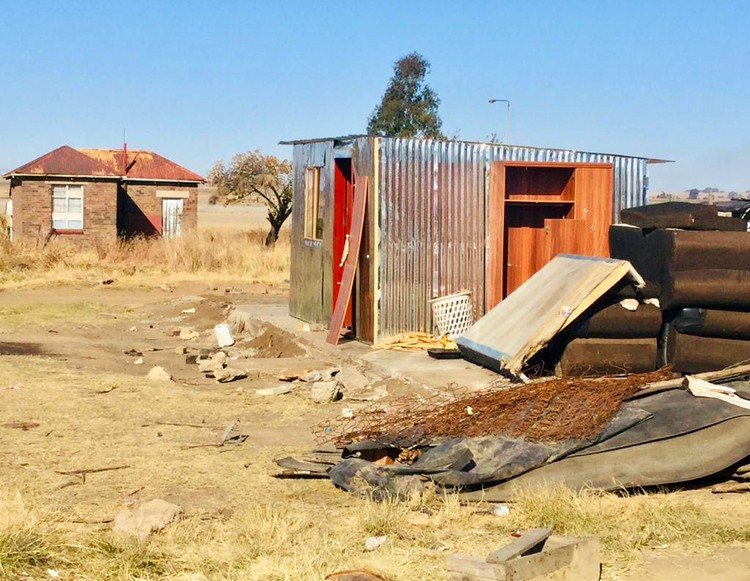 A shack belonging to one of the Happiness Village residents whom the SANDF tried to evict in May. Photo: Kimberly Mutandiro

In the latest development in a conflict that has been going on for many years between residents of Marievale outside Nigel, Gauteng, and the South African National Defence Force (SANDF) and the City of Ekurhuleni, a community representative says he is now under military imposed house arrest.

The SANDF has placed men, women, and children of Happiness Village informal settlement (about 210 people) under a military curfew in what residents say is the army’s latest attempt to force their eviction.

The army has blocked all roads leading to Happiness Village. They have recently set up an access control gate with armed soldiers. GroundUp, which was previously able to visit the area, was denied access this week. A senior officer said no one is to be allowed in.

Residents from inside Happiness Village have sent us pictures and videos of armed soldiers patrolling the area. A curfew has been imposed during the day from 7:30am to 5pm. Residents say they are insulted and treated roughly when out and about. Those who go to work say they must sneak out through the bush in the early hours.

Residents also complained that practice hand grenades are shot in the air throughout the night and smoke grenades have been used on them. Photos were sent to us of spent grenades.

Happiness Village was formed by people who were evicted from Marievale in November and December 2017. A year later the Pretoria High Court ordered the SANDF to re-accommodate them as the eviction was unlawful. The SANDF appealed the decision but lost. Then in May this year, ten families were evicted and residents obtained a temporary court order to stop the evictions. The City of Ekurhuleni said it was not evicting the residents but relocating them. But the housing project the City wants to move them to will only be completed in two years.

Community representative Chris Koitsioe says he has been confined to his home for the past three days. Armed soldiers have been placed at his shack. On Friday morning, Koitsioe sent us a video of soldiers outside his home.

“They claim that they are failing to execute their task to evict people because of me. Three soldiers with big guns are sitting next to my house, stating that they were given instructions not to allow me any public movement. They are even denying me to go to my workplace,” said Koitsioe.

“People who try to resist are being forced to do military exercises and they are being tortured. What the army is doing is confusing residents. We have been waiting for both the army and the Mayco Member for Human Settlements to forward a relocation plan. Instead, on 19 July the military came to Happiness Village at midnight and started shooting explosives like in a battlefield. Apparently, they expected people to flee from their houses. Because we have refused to leave, they chose to deny me any freedom of movement,” said Koitsioe.

Gracinda Mazivi, a Mozambican immigrant living in Happiness Village, said she is afraid for herself and her children. She said, “While we sleep at night, we hear sounds of explosives. It’s terrifying and we can’t sleep. They even attacked us with smoke grenades. Life in Happiness Village is now even tougher here. There is nowhere to run to and even if l tried, where would l go to because this is my home?”

On Tuesday, she had tried to go to a shop to buy bread when some soldiers chased her, threatened to beat her, and told her to stay put.

“The army is accusing us of refusing eviction. They said they are going to make us suffer until we move from the area. l have watched with my own eyes while people have been beaten for trying to go to the shop or to fetch water. My children cannot even go out to play. We are all living in fear,” said Mazivi.

Isaac Manigue said a smoke grenade was thrown at him and he was beaten while sitting in his yard on Monday. Then on Thursday other soldiers forced him to do push-ups, he said. “They said l was a foreigner and yet l was refusing to leave the place.”

Meanwhile Louise du Plessis of Lawyers for Human Rights has forwarded a letter to SANDF’s attorneys demanding that the army desists from harassing Happiness Village residents.

“The army advocate says military exercises are being carried out at Happiness Village because it is their land. We have demanded that they stay away from Happiness Village. We await their response.”

“Our clients further inform us that on Tuesday, 21 July 2020, early in the morning, soldiers from the Marievale military base, under the instruction of Major Marese, shot flares, discharged rifles, and other firearms around Happiness Village. None of the residents were given any prior notice or warning of this and, as a result, it left the community which includes children and elderly people in shock,” Du Plessis wrote to the SANDF.

“It is difficult to escape the conclusion that the reason for both the unlawful eviction from Marievale and also now from Happiness village, is to get rid of the community to make way for the planned mining operations,” wrote Du Plessis.

“Even if we are incorrect about the above, it is absolutely clear that the SANDF has no right to conduct military exercises in the vicinity of Happiness Village while our clients occupy the area,” he wrote.

The SANDF Media Liaison office in its previous comment said “The SANDF does not have mining interests in Happiness Village, however the land adjacent to Marievale Military Base is Department of Defence land as per demarcation by National Department of Public Works. Nobody was threatened or evicted by SANDF members and there are only soldiers staying in the houses.”