Durban is “waging war” on the poor during a pandemic, says shack dweller movement 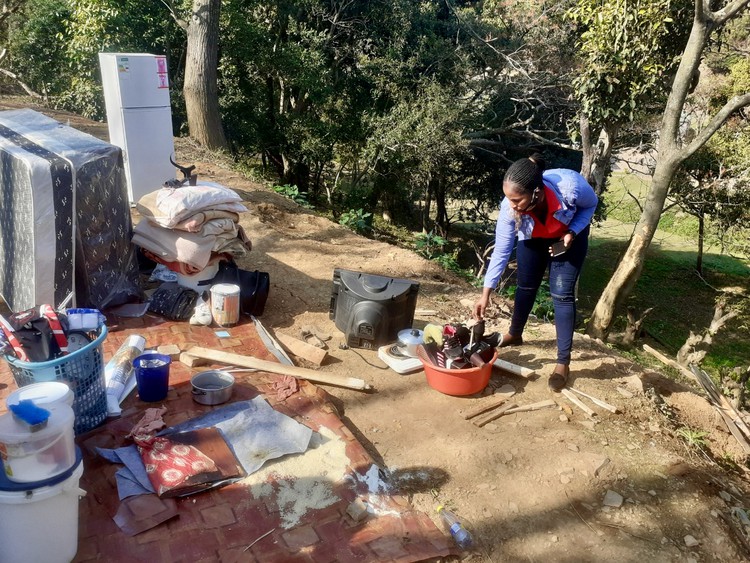 Nokuthula Mbuthuma of Khenana informal settlement picks up the pieces after her home was demolished on Tuesday. Photo: Nokulunga Majola

Thirteen shacks were demolished in Khenana informal settlement in Cato Manor in Durban on Tuesday. The operation involved the Durban Metro Police, the Anti-Land Invasion Unit, and Calvin and Family property developers.

“I don’t know what my son did to them to be beaten up like that,” said Nokuthula Mabaso, mother of a 15-year-old boy with epilepsy. Mabaso said her son was trying to find a place to hide when he was hit by rubber bullets. “He didn’t do anything to them. My child is scared and traumatised by this incident,” she said.

She said she tried to take him to hospital but he refused saying he wasn’t in too much pain.

She said the demolition squad arrived at 10am, armed. “They didn’t ask any questions or listen to anything we had to say. They ordered us to remove our items from our shacks. When we refused, they started assaulting us and firing rubber bullets,” said Mabaso.

Residents of Khenana informal settlement obtained a court interdict on 24 April to stop further demolitions after the municipality repeatedly demolished structures, residents say in violation of a previous court order and lockdown regulations.

Phumelele Mkhize said when the rubber bullets started flying she ran and locked herself in her shack. “I don’t know if anybody saw me but they broke the door and started assaulting me while others were demanding my phone. They used the back of the gun to hit me in the head and cut my arm with a bush knife,” she says. “I have three stitches on my head and one in my arm.”

Mkhize said she didn’t understand why they had followed her to her shack and in the end had not demolished it.

Msawakhe Magwaza said, “I had just woken up when I saw them coming and shooting at people with rubber bullets. My eye is swollen at the moment and I cannot see. We want justice for what happened, but mostly, we want to be left alone to live in peace.”

Chairperson of the settlement Lindokuhle Mnguni said, “This is clearly political as they also took all our documents that were at the office and laptops which had our confidential information on them … They are using excessive force and beating people up for no reason.”

Abahlali BaseMjondolo deputy president Mqapheli Bonono said eThekwini Municipality are “waging war” on the poor in a time of pandemic “as millions of people have lost their jobs and people are starving”.

“They are not just attacking the homes in the occupation, they are also trying to destroy the co-operative that the residents have built which is producing food and has funded toilets, sanitisers, face masks and transport costs for the community,” said Bonono.

City spokesperson Msawakhe Mayisela said, “We are appealing to all formations that claim to be representing land invaders to refrain from fanning disinformation with an intention of tarnishing the image of the City. Meeting the needs of the poor will continue to be on top of our development agenda and no amount of lies would distract the City in this regard.”

Mayisela said anyone with evidence of violations was “at liberty to take that evidence and institute a legal action and the City would at all times cooperate with institutions mandated by our constitution to dispense justice”.

Calvin and Family property developers refered GroundUp to the City.

Next:  Wear a mask or face a fine, taxi associations warn drivers