The smell of fire hangs in the air in Imizamo Yethu

Bantu Dabula’s home has been burnt down three times 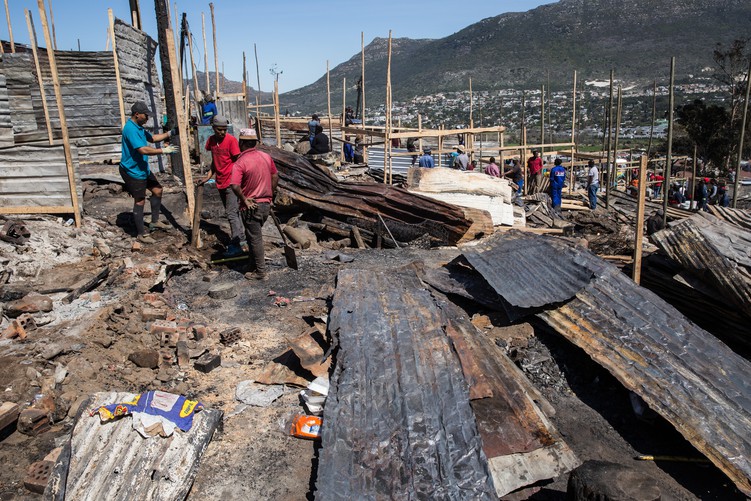 Thando* helped extinguish the fire that destroyed 263 shacks in Imizamo Yethu early on Sunday 6 September. He pulls down his collar to show burn marks snaking round his neck to his lip.

He had been at an Imizamo Yethu tavern when he heard the cries of fire. A friend’s home was under threat from the approaching blaze. His heart racing, he rushed to join his friend and remove valuables. When he got there, the fire was only two shacks away. He grabbed the nearest appliance, a microwave. Forgetting to unplug it, he was stuck at the door when a nearby electricity pylon went up in flames. Wires were set loose, wrapped around his head and neck, and he was thrown to the ground. Instantly sobered, he freed himself from the wires, and ran.

Thando stayed up all night, helping to knock down nearby shacks to create a firebreak. Shortly before sunrise, the blaze was under control, stopped two rows away from his in-laws’ house. His adrenaline depleted and feeling the pain from his injuries, he walked to his home, in the untouched lower regions of Imizamo Yethu. He told GroundUp that he knows that he could have died, “But what else could I do?”

The City of Cape Town said that the fire in Hout Bay “razed 263 structures”. According to Nosiseko Siswana, co-founder of local organisation Thula Thula, which has been leading relief efforts, about 420 families or roughly 1,500 people were directly affected.

The first tranche of building materials supplied by the City arrived on Monday. By Tuesday, rebuilding efforts were well under way. 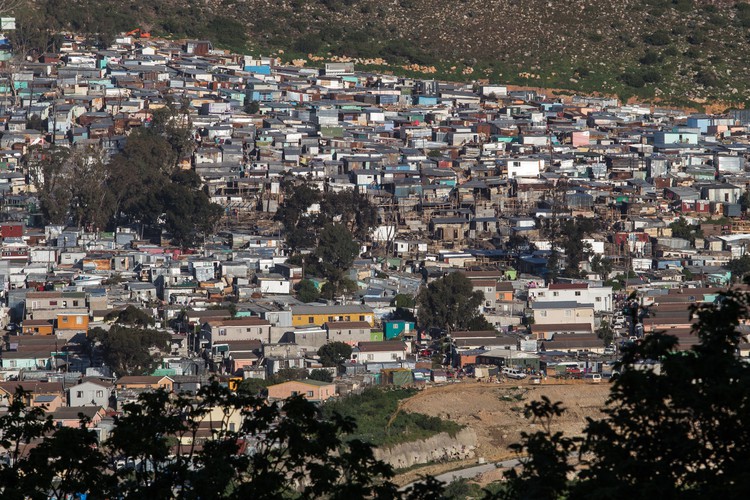 Since 2017, eight people have died in Imizamo Yethu fires, says a community leader.

Gary Samkelo** is the chairperson of the South African National Civic Organisation (SANCO) in Hout Bay. He was helping residents and the City coordinate the distribution of building materials. He told GroundUp that he was grateful for the help offered by the City and civic organisations, but, he said, “Relief is not enough.”

No-one died in Sunday’s fire. But Samkelo said that since 2017, eight people had died in Imizamo Yethu fires. As a community leader, he has long been waiting for formal housing in the settlement. Pointing across the valley to the government flats in Hangberg, he says: “The government is supposed to be doing something like that. All we receive are promises.”

Samkelo gestures to Judas Peak, where massive private homes are under construction high up the mountain, “We are told it’s too expensive to excavate this land, but look. This place [Imizamo Yethu] was designed for 455 families. If the government wanted to help, they would build flats.”

The smell of fire hangs in the air and people are busy rebuilding. Those who lost their shacks have to register through Thula Thula to get access to the City’s building material relief programme. The allocation is 25 zinc sheets, 14 wooden poles, and a door and a window to rebuild. This is just enough to rebuild a 3 by 3 metre shack. John Katamba, chairperson of the Malawian Society of Hout Bay, estimates the value of this package at about R5,000, costing the City approximately R1,315,000 for the 263 structures destroyed. Katamba has lived here since 2008.

Sam Kashungi, a young man from a Namibian family whose parents moved to Imizamo Yethu in 1993, is rebuilding his home with the help of friends. Kashungi says many promises have been made over the years, from basic infrastructure to RDP houses.

“People have forgotten the government,” he says.

We are guided up the mountainside which is alive with activity. On a narrow and uneven trail, we join a train of people carrying building materials to their work sites, carefully stepping over the debris - blackened bed springs, warped tin cups. Some homes have already been completed. One person in a newly rebuilt home is laying fresh concrete on a cracked floor.

Michael Maqubele and his partner Vathiswa Mtakati were out of town when a neighbour phoned them to tell them about the fire. They rushed back, but their home was gone.

Maqubele’s son Wela was rebuilding, helped by four others. He did not wait for the City’s building materials and bought his own. Anyway, the consignment is insufficient for his six-person house, he said. “There is no time to spare,” said Maqubele.

Bantu Dabula — “Shoes” to his football friends — had taken a drink break atop his pile of scorched zinc sheets. He planned to use old and new zinc sheets. This was the third time his home had been destroyed in a fire, first in 2014, then in 2017, and now 2020. “Every three years,” he says. “Is this bad luck?” 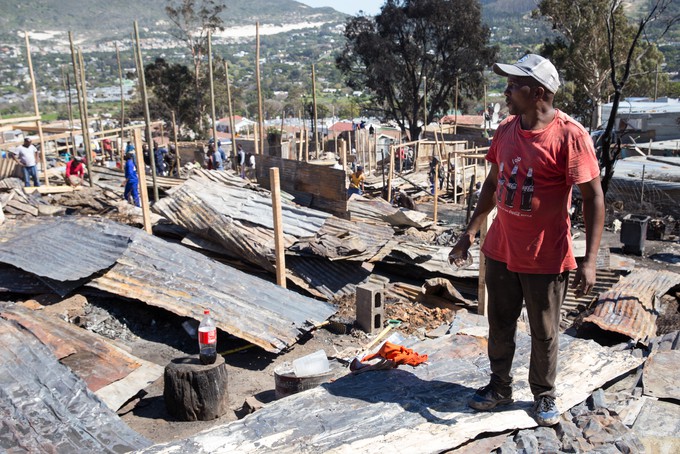 Bantu “Shoes” Dabula in the process of rebuilding his home. He lost his house to fires in both 2014 and 2017. 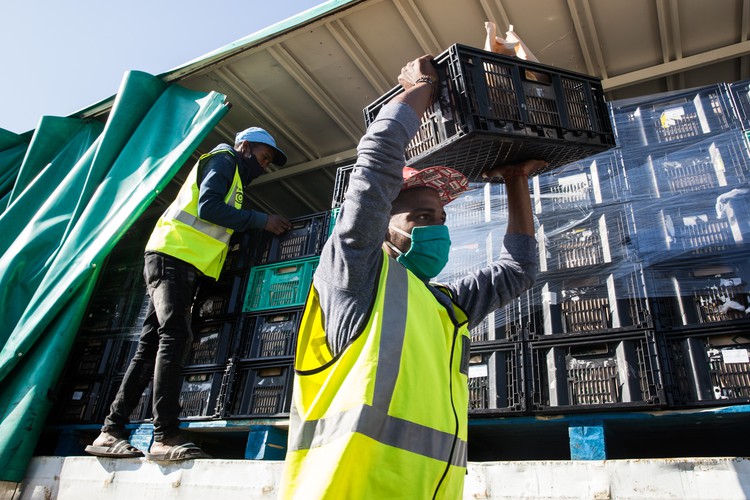 Besides coordinating the registrations for materials, Thula Thula has organised “shopping” for those who are destitute. Siswana said they planned to help 426 families that afternoon.

At the astroturf football field opposite the Hout Bay fire station, more than 100 large plastic containers of donated clothes and bedding have been collected. People registered by Thula Thula were allocated a time to arrive.

First, temperatures are checked and hands sanitised. Masks are compulsory. People are given large zip-up “taxi bags” and can choose donated clothing, bedding and toiletries to replace what they lost. Finally, they receive a bag of essential groceries. There is a special area for children’s clothing and childcare products.

By the time the site is ready to open at 5pm, there is a queue of hundreds stretching along Hout Bay Main Road. People enter the field, quietly select clothes, collect essentials, and lug their heavy bags back up the hill to where their homes used to be. 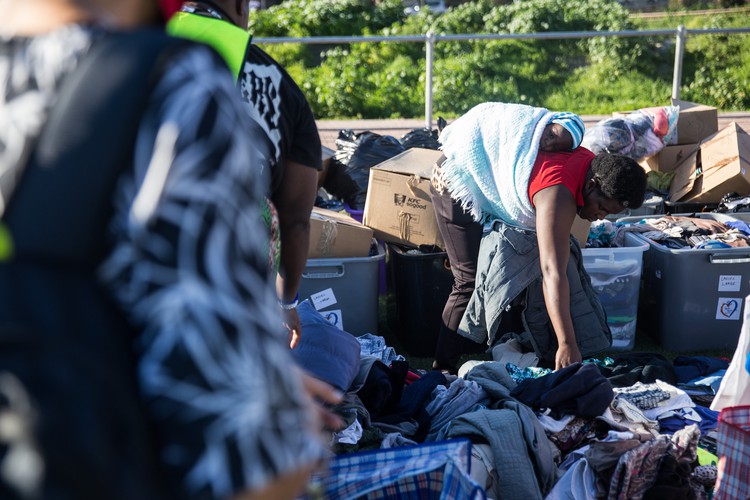 Donations of clothes, sleeping bags, blankets and food parcels were brought to the nearby sports field so those affected by the fire could come to “shop”.

** This how he identified himself to GroundUp - he has been previously identified as Samkelo “Gary” Krweqe in other media.

Next:  Spatial injustice remains at core of rising inequality