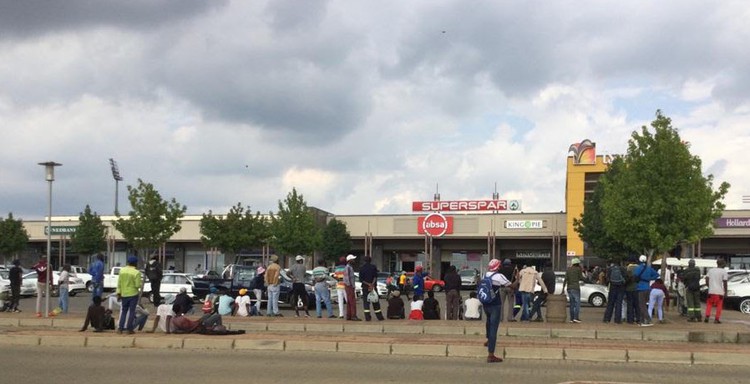 Long queues at the post office in Tsakane Mall have prompted “agents” to offer to queue for social grant beneficiaries for a R50 fee. Photo: Kimberly Mutandiro

The long queues for the Covid-19 grant in Tsakane and Kwathema in Gauteng have spawned a new business: queueing for other people. Cousins Gwanetsi and Marshal Ntwagae are among several young men who have found a way to make up to R250 a day each, charging social grant beneficiaries R50 to replace them in the queue.

The Ntwagae cousins look for clients in Tsakane during the day and then spend the night queuing on their behalf at the post office inside Tsakane Mall. They say on a good day they can each represent five people and make R250. Their clients, some of whom come from Duduza and Gelukdal, some eight kilometres away, need only join the queues later in the day before the post office closes.

“People are tired of standing in the queues and we are here to rescue them. It’s never easy, but we always put up a fight to ensure that our clients do not lose their positions,” says Ntwagae. He says things can get ugly, especially during the early hours of the morning, when they clash with other self-proclaimed agents who also help people for a R50 fee.

“One has to put up a real fight, because people push each other violently to stay in the queue,” says Gwanetsi Ntwagae. Sometimes, he says, knives are drawn.

But he says he and his cousin have never lost a fight and are popular with their clients. “It’s easy money,” he says.

Sometimes, says Ntwagae, “agents” collect copies of IDs from clients in the township, and “forward” them to post office employees inside. These employees give the beneficiaries’ money to the “agents”, who deduct R50 before handing it over.

When GroundUp visited the mall on Thursday morning, a post office employee was going around reprimanding people whom he claimed took R50 from people to jump the queues.

“This is one of the problems we are facing at this post office,” says Mohau Mohlakoane, supervisor of the post office. “Many complaints have come forward that certain people are making money for themselves by making clients jump the queues. Others pretend to be standing in the queues for themselves just to get the tickets we issue to clients, only to resell them to others. None of the corrupt activities have anything to do with us here at the post office.”

“People are so desperate that they keep coming everyday, even if we tell them that their money does not reflect in the system as yet. It is chaotic,” said Mohlakoane.

Some people GroundUp spoke to said they had been struggling to get their money for months.

Ntombi Gwala says she and others burnt tyres last year November in protest due to delays at the post office. “We do not dare to protest now because they have threatened to close the post office if we do. There are corrupt dealings here and some of us who wait in the queue suffer because of that. We stand in the queue for nothing, only to see hundreds of people forging their way in front of us. No matter how much we complain it does not help,” she says.

Gwala says she has only received three payments of the Covid-19 relief grant since her application was approved in April last year. She says she queues every day, going home when the post office closes and coming back to sleep outside the post office most nights, leaving her children with a relative.

“I look after two children, what am I supposed to do when there is no food to give them,” she says.

Sibbongiseni Mazibuko says post office staff are often part of the problem, taking copies of IDs from township residents and bringing them their money. “They take their bribes from the R350 before giving money to the owners. If police were to search staff I’m sure they would find lots of ID copies and money inside their bags. That is why there are delays inside,” says Mazibuko, who has been queueing since October last year.

Rose Jacobs from Gelukdal says, “I don’t understand why l have to suffer for money which the government gave me. If they approved me for payment, that means it’s my money. But l have to sweat before l get paid.”

Zani Dludlu, marketing manager for Tsakane Mall, says, ”Things have really been bad here at the mall. People are coming from as far as Duduza. It has been difficult to control people and many times they have threatened to burn the whole complex because of the R350 grants. Our security officers are working overtime to try and contain the situation.”

At Kwathema Post Office on Wednesday afternoon, some of the people in the queue were shouting at security officers, accusing them of letting their friends jump the queue. The security officers denied that they were doing this.

Some elderly people told GroundUp they had been coming every morning since last year, sometimes as early as 3am.

“At first they used to take up to 250 people per day but of late they have been cutting lines. There are lots of funny things going on inside, which is probably the reason why they are no longer taking 250. It’s 3pm now and only 30 people have been served. I’m on number 66 and have lost hope of going inside,” says Mpho Maluleka. She says she has only received three payments since June last year. 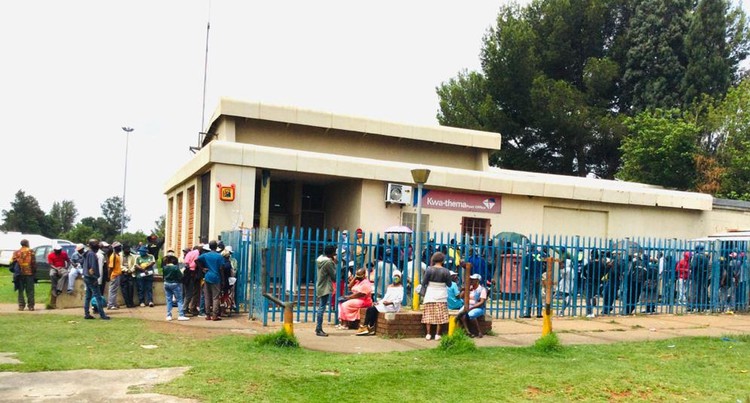 Some of those who queue at the Kwathema Post Office say their applications for the Covid-19 grant were approved months ago but they have not been receiving their money. Photo: Kimberly Mutandiro

Themba Nkosi from Kwathema says he received approval for the Covid-19 grant by sms in July last year, but is yet to receive any money. He says he has been trying his luck in the queue since July last year but whenever he gets inside he is told that his money “is not yet in the system”.

“In town, queues are more manageable,” said Ntokozo Mashiane. “It’s only that we do not have money for bus fare to go to town. Here in the township people are always on top of each other,”

He says he has only received one payment since August last year and feels he has run out of luck.

CORRECTION: Ms Dludlu’s first name was spelt incorrectly in an earlier version of this article.

Next:  Premier Winde calls on President Ramaphosa to intervene in SASSA crisis