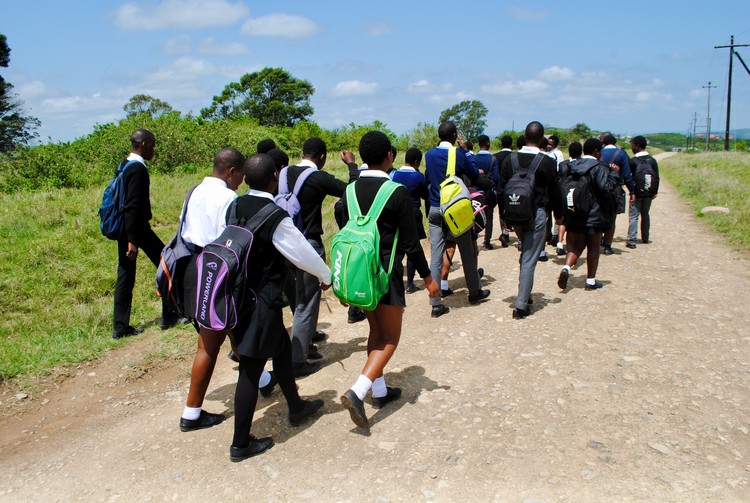 LM Malgus Senior Secondary School learners walk about 20km to and from school every day because there is no scholar transport. Photo: Mkhuseli Sizani

Grade 11 learner Sinethemba Nkululeko wakes up daily at 3am to walk ten kilometres from his village to school in Willowvale, Eastern Cape. At 3:10pm he walks the ten kilometres back home. He is one of 15,000 learners in the province who are eligible for scholar transport but are not getting it, because there is no budget.

Binqose said that the department has to cut costs on events, travelling and accommodation for its employees in order to pay for scholar transport. Next year the department will only have budget to transport a bit more than 100,000 learners, leaving over 20,000 more learners without transport.

This means over 35,000 learners will likely be without school transport next year.

Teachers in rural areas are worried that their schools might shut down because the learner numbers are dwindling every year due to the high rate of school dropouts.

Seventeen-year-old Sinethemba goes to LM Malgus Senior Secondary School in Willowvale. “Since 2020 there has been no scholar transport here. I wake up at 3am everyday because I walk about 10km from Zenzile Village to get to school. I leave my home at 4am and it is very dark in winter. For safety, I walk with my two classmates. We cross the rivers and walk through the thick bushes. Then we arrive at school at 6am for morning classes.

“By 3:10pm the school closes and it is another 10km back home. I get back home about 5pm. Then I have to go to the river and fetch the water to wash my school uniform, bath and cook. I also have to collect the livestock and still do my homework. Then at 9pm I go to bed and sleep. But in the classroom sometimes it’s hard to concentrate because I feel tired.”

His classmate Luzuko Bohlo, 20, from Bikana Village also complains about the distance. He said, “I wake up at 4am and then go to school at 5am. Our school shoes are worn out in a few months. This is my third pair of shoes. Sometimes we wear gumboots because we walk in wet places. Most of the time we don’t finish our homework at home because we are tired.”

“On wet days we stay at home because there is no way we can concentrate in classrooms while our clothes are wet.”

School principal Manelisi Mtshizana spends sleepless nights worrying about his school. “We have a huge dropout of learners because of the lack of scholar transport. When I arrived here in 2017 the number of learners was 172 and it has dropped to 103. I had to allow the matric failures to repeat the whole year in order to keep the school going. The matric pass percentage then was 13℅. But last year it was 50℅.

“I have 30 learners who travel 20km daily to school. Next year the number of learners who need transport will increase to more than 60, because I will be receiving new high school learners,” he said.

“Since February I have been in and out of the department’s office asking for scholar transport because my 30 learners couldn’t come to school on wet days.”

“Last week the department promised that it will organise transport, only for 35 learners,” he said.

Bulungula Incubator Vibrant Village manager Lihle Mbikwana told GroundUp that learners walk four hours a day. “As a result many learners quit school when they reach high school because they can’t cope with the long distance.”

“In 2009, while I was still a learner we were promised scholar transport. But until today that has not happened.”

Mbikwana says some parents rent rondavels for their children near Zwelenqaba High School. “They pay between R150 and R500 a month, depending on the quality of the rondavel. But this is not helpful because there are no strict rules in these rondavels. Sometimes a girl and a boy share the rondavel and this leads to teenage pregnancy,” he said.

Malibongwe Mtima spokesperson for the provincial education department referred all questions to the Department of Roads and Transport, which he said had been managing scholar transport since 2011.

Binqose said school transport was only a temporary solution anyway. “I still remember when I was an SABC journalist in 2015 a call was made by government that boarding schools should be built in order to cut the transport costs and minimise scholar transport accidents. But no department was given the task of building the boarding schools,” he said.

Outsourced guards accuse Ekurhuleni municipality of failing to pay them