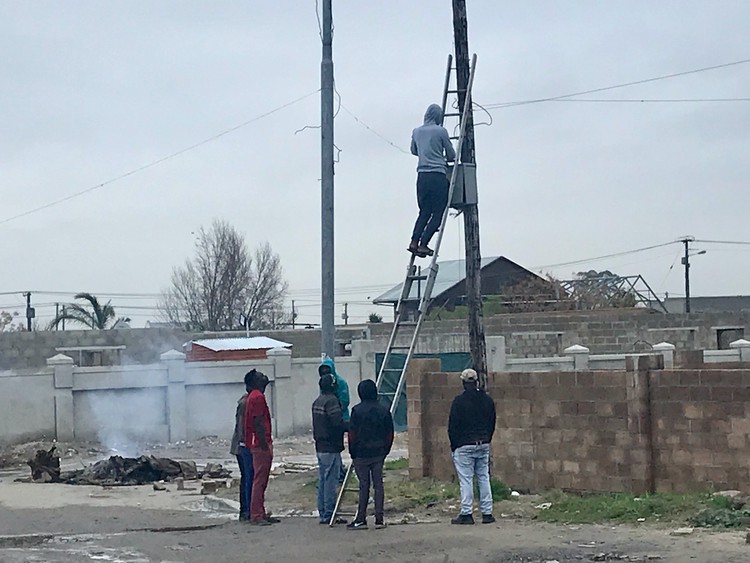 Hundreds of residents from Sophiatown informal settlement near Kuilsriver, Cape Town, protested by blocking roads with rubble and burning tyres on Monday. They were demanding houses, electricity and water. Residents are fed up with living conditions in Sophiatown, which was established 20 years ago.

Mayoral Committee Member for Human Settlements Councillor Malusi Booi said last week that the City was talking to the residents to find a solution. He said the City cannot install services on land that is not suitable for human habitation due to railway lines and wetlands.

Community leader Monde Njokweni said police fired tear gas and rubber bullets to disperse them. “The community is very angry that we can’t get access to the electricity box. About 750 structures here are depending on two taps … All the shacks are damp inside; all the pathways are flooded.”

Last week, illegal electricity connections at a business called SmartMatta were disconnected and security hired to prevent reconnections. We were unable to reach the owners or management for comment.

After the protest on Monday, we saw residents making new connections near some houses in Kuilsriver.

“Without electricity it’s bad my sister. Think of elderly people who are taking chronic medication. They must have electricity to cook and refrigerators to store medication,” said Njokweni.

“This big number of people you see here are not working. If they get a grant they would buy meat in bulk and store it in the fridge, but because they don’t have electricity, now they must buy chicken skin from the spaza shops every day,” he said.

Njokweni said ward councillor Ebrahim Sawant had addressed the protesters. “He promised to set up a meeting for tomorrow [Tuesday] with all concerning parties such as Eskom, The Passenger Rail Agency of South Africa, and the company where they were illegally connecting electricity, to resolve the matter.”

At the time of publishing, the City had not confirmed if the meeting would be taking place.

Police spokesperson Sergeant Noloyiso Rwexana said a case of public violence has been opened. “Police and other law enforcement agencies attended the protest and police took action to disperse the crowd. No one was arrested. The road was closed and it is now open.”

Next:  Taxis operating at full capacity