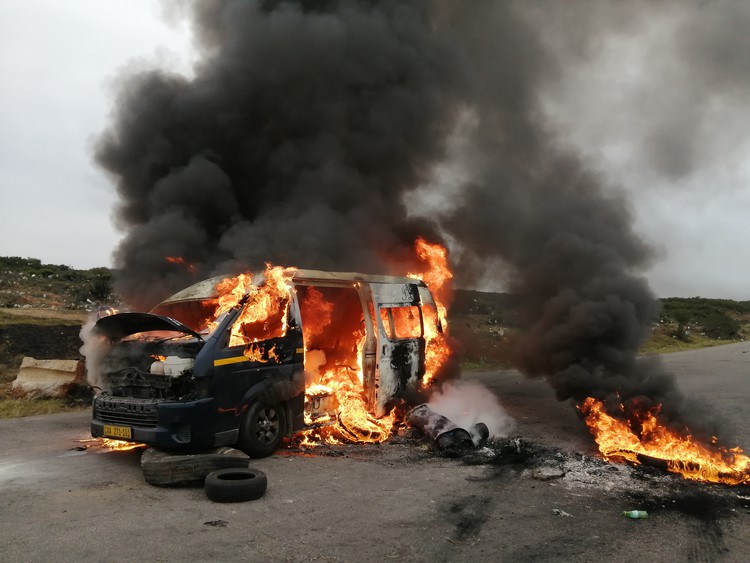 Thousands of commuters in Gqeberha were left stranded on Tuesday morning when taxi drivers from the Uncedo Taxi Association and Port Elizabeth District Taxi Association (PEDTA) protested, bringing part of the City to a standstill. The drivers are demanding answers about their Unemployment Insurance Fund (UIF) Temporary Employer/Employee Relief Scheme (TERS) funds.

At least seven taxi drivers were arrested, two vehicles torched and a truck was hijacked and looted during the protest. Protesters also blocked the entrance of Dora Nginza Hospital and shopping malls. Learners and workers were forced to return home.

Police spokesperson Captain Andre Beetge said the mass action started at about 6am on the R75 between Chatty Dip and Despatch, which included in front of KwaDwesi Police Station and various points on the R335 next to Motherwell and Ikamvelihle. Several other roads were also closed with burning tyres and rubbish.

Beetge said that an uber vehicle was burned in Nooitgedagt Road and a taxi in Old Uitenhage Road. “A truck was hijacked on the N2 and looted by about 1,000 people on the N2 freeway where the barricades were placed in the road. Seven of them were arrested for damaging infrastructure,” said Beetge.

The Nelson Mandela Bay Regional Taxi Council has since called for an urgent meeting to discuss a solution to the problem. This is the second time in three months that the taxi drivers have protested over their TERS money.

Norwich Taxi Association drivers, who were not part of the strike, were forced to suspend services for the safety of passengers. The Agoa Bus Company and private scholar transports also stopped operating for the day.

A driver with the Uncedo Taxi Association told GroundUp that according to the Department of Labour’s records, he is shown to be a permanent employee who earns R4,500 per month. “Most of us are unable to pay our bills and the municipality says we don’t qualify for the assistance because we are full time employees.”

“I have been working as a taxi driver for ten year and I never earned R4,500. But the corrupt taxi owners have claimed a lot of TERS money using our names.”

Mxolisi Ntanjana, 51, said he has not received anything since applying for his TERS funds in June 2020. “I have four children and I am unable to take care of them. The funds were going to help me to provide for them.”

Joseph Mohamed, a worker from Qunu Informal Settlement said, “It’s my payday and there is no food at home. I was expecting to get to work and get money to buy food for my four children. But the taxi drivers just turned us away without an explanation. Everything was chaotic.”

Ayanda Qoko, general secretary of PEDTA, refused to comment and referred all questions to the taxi council.

Andile Andries, regional secretary of the Taxi Council said, “We have decided to intervene and call an urgent meeting to listen to the drivers’ complaints and ask for solutions from the associations.”

When asked for comment, the UIF’s Makhosonke Buthelezi said, “It is not easy to provide a comprehensive response without the details of each of the applicants. We will need ID numbers to check in the system.”

Previous:  Thousands of villagers without electricity for nine days in Free State