Itumeleng Phiri started a recycling business on the site, then a food garden 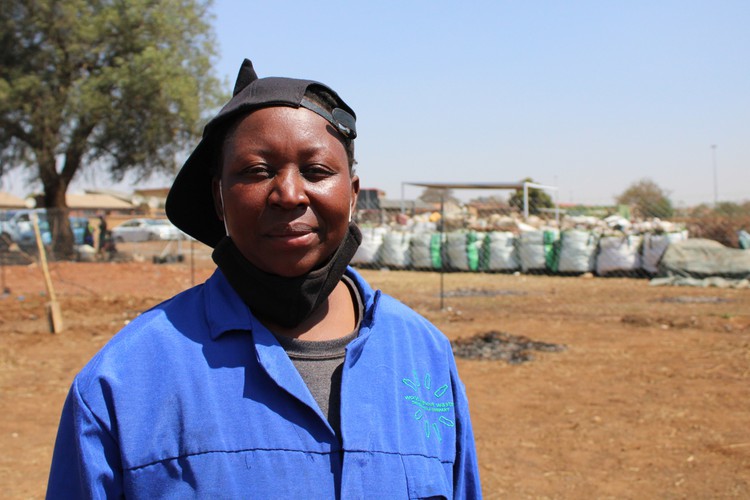 Itumeleng Phiri from Tembisa has started a recycling project and food garden on a field previously used as an illegal dump site. Photo: Masego Mafata

For years Itumeleng Phiri watched in frustration as people illegally dumped rubbish on a field near her home in Makhulong section, Tembisa.

“The land has been vacant for many years. At some point, the grass was very overgrown in many parts,” she said.

Phiri, who became unemployed in 2012, started the recycling project, Itumeleng Future Solutions, in a bid to clear the large volumes of waste being dumped at the field.

“I wanted to keep busy and contribute to my community in some way,” said Phiri, who lives with her four children.

When she started the project, Phiri would push a trolley around Tembisa, sometimes at night or in the early morning, to collect recyclable waste. “If there were functions happening at night, I left the house at around 9:30pm to go and collect recyclable materials from the rubbish at those functions. I would return home between 11pm and midnight and go out again around 3am,” she said.

Nearly a decade later, Phiri says she has partnered with companies such as Coca-Cola Beverages South Africa and Mpact to grow her business and would like to employ more people from the community.

She sorts and stores the recyclable materials she collects on a portion of the field.

“I’m still on the ground doing a lot of collecting. On average, we collect between 300kg and 500kg of recyclable waste over weekends alone, which amounts to between R1,500 and R2,500. Through recycling, I can afford to take care of my kids, buy food and pay rent,” said Phiri.

Her main challenge is transporting the materials. “If I had a bakkie or a small truck it would be much better. Right now, I’m using a small trolley. Sometimes, I have to make multiple trips to one place because I cannot carry all the recyclable materials,” she said.

Last year, Phiri started a food garden on a portion of the field. She currently employs eight people and grows spinach, cabbage and morogo.

Phiri’s son Kgalemo, who helps in the food garden, said, “People have been trying to use this land for farming for years. There have been challenges with the dumping. But as more people become aware of the work my mother is doing, they seem to be more involved in recycling and starting their own food gardens.”

Currently, Phiri uses her produce to feed her family, sells to neighbours who can afford it and gives some to people who do not have food. “Eventually, I would like to supply local fruit and vegetable vendors,” she said.

Next:  Where there’s a wool there’s a way: Dolly the sheep bleats the odds