“They are threatening our future. This year is already hard with Covid-19” says matric student 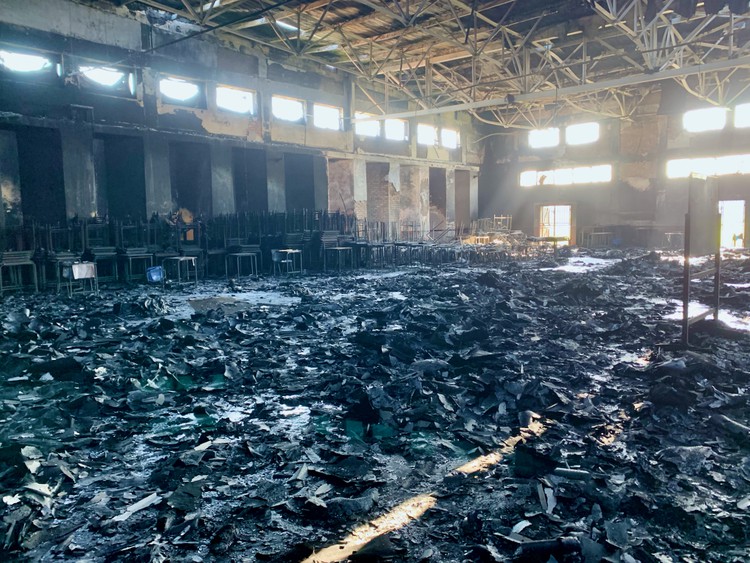 On Wednesday, Sinenjongo High School hall was petrol bombed, destroying all the school equipment and furniture stored in the hall as the school had sought to make space in classrooms to adhere to Covid-19 physical distancing rules.

On Wednesday, Sinenjongo High principal, Khuselwa Nopote, stopped learners from staging a protest, telling them that you can’t fight “wrong with wrong”.

Learners had placards which read: “The life of a black child matters”, “ No place for arsonists in Joe Slovo”, “Stop destroying our schools”, and “ Never back down #Sizofunda sipase [We’ll learn and pass]”.

Matric student Cebo Pikini said: “The community is letting us down, instead of them supporting us. I see it as mediocrity and greed. They are threatening our future. This year is already hard with Covid-19; now they are burning our school infrastructure. It’s inflicting pain.”

Sinenjongo High had for years operated out of prefabricated, temporary structures. The Department of Transport and Public Works (DTPW) spent R47 million to build the new school with four science laboratory rooms, a media centre, and a computer laboratory. It was handed over to the Western Cape Education Department (WCED) on 28 October 2016.

“I was called at about 1am by night shift security guards informing me that the school is burning,” said Nopote. “When I arrived at the school at 7:30am I was very hurt. The teachers and learners were crying. We didn’t get this school easily.”

Nopote said the perpetrators were a group of people fighting to occupy vacant land. “Even if they burn this school they won’t get the piece of land,” she said. “In fact, these are thugs.” She said they had no respect for education.

Noxolo Mayeki, who has twins at the school in grade 12, said: “We want these people arrested and as parents we will go oppose their bail at court. They are troublemakers and we want them evicted from our township. The government must find them land in the rural Malmesbury. We don’t want them here.”

Community leader Mzi Sopeni said a meeting had been held on Tuesday at 4pm with councillors and the police. Sopeni said police were warned that the protestors planned to burn down the school and also three houses in the Phoenix area.

“The police ignored our intelligence. I feel like the police are part of the criminality. If they wanted they could have protected these areas,” said Sopeni. (SAPS had not responded to our questions by time of publication.)

Boya said she was called at 10:22pm on Monday and told her school was burning.

“We are not involved in allocating land for housing. Their anger is directed to wrong places,” she said.

The school accommodates 1,756 pupils from grade R to 7.

Western Cape Education MEC Debbie Schäfer condemned the attacks. “These disgraceful acts of thuggery will do even more harm to our children’s education at a time when teaching and learning is already difficult,” she said.

“The Department’s budget has just been slashed again, and other schools and areas have been waiting patiently for a long time to receive schools and halls. We will not prioritise schools that are destroyed over others that have been patiently waiting for facilities. This destruction must stop.”

Mayco Member for Water and Waste Xanthea Limberg confirmed that a City cleansing truck was petrol bombed in Joe Slovo Park on Tuesday evening. No staff were physically harmed. Trauma counselling has been offered to them.

Mayco Member for Human Settlements Malusi Booi said the land targeted for occupation is partly owned by the City and a road reserve for future expansion and mixed use development, including a housing development.

Next:  Municipality “deep cleans” shacks but there is no evidence this is useful against Covid-19

Woman who sold municipal water told to leave her shack