Waiting for the scrapheap: hundreds of Shosholoza Meyl’s rusted carriages to be scrapped and sold 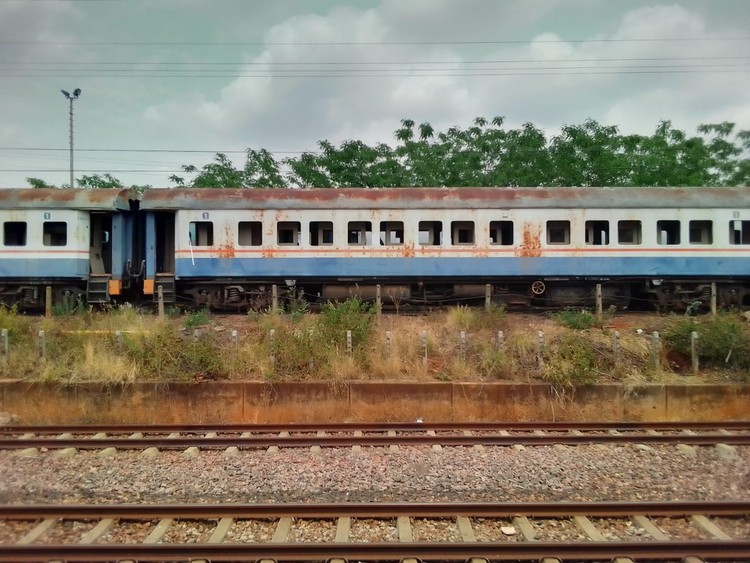 The Passenger Rail Agency of South Africa (PRASA) says 396 Shosholoza Meyl carriages, most of its fleet, are “obsolete” and will soon be scrapped or sold.

At Pretoria’s Bosman Street station alone, there are 155 carriages rusting on the sidings, some for over a decade according to satellite photos.

PRASA told GroundUp that there are “over 600 carriages” for Shosholoza Meyl trains across the country.

295 coaches “will undergo general overhaul” over the course of the next five years, and 22 coaches will be refurbished in the current financial year - the rest will be sent to the scrapyard. PRASA said that the Bosman Street station carriages were among the 295 carriages nationally that would be scrapped and sold.

Shosholoza Meyl, which handles PRASA’s long distance train services, has had its trains out of service in Gauteng and the Western Cape yards since February 2020, when it was shut down on the Railway Safety Regulator’s instructions after a fatal crash outside Johannesburg.

The obsolete carriages take up most of the space in the yard’s staging area. Many of the carriages have been pillaged for parts by thieves.

But these rusting hulks should soon leave their purgatory at the station sidings.

PRASA’s spokesperson Andiswa Makanda told GroundUp that the rail agency “has approved a retirement strategy for 2022/23 and a scrapping contract has been awarded that will assist in the disposal of obsolete assets”.

Makanda said that PRASA could not share their scrapping strategy because it is an “internal document”, but confirmed that it is “currently in implementation”. She said that a company would be appointed “to assist with scrapping in a very safe manner and so our yards allow for storage.” She did not say when it would start.

PRASA says the lifespan of its train carriages is about 40 years, with each carriage undergoing a general maintenance overhaul after each “nine to ten years”.

However, the state-owned rail agency admitted that “majority of our fleet will undergo heavy maintenance general-overhaul while some of our coaches are obsolete in terms of the technologies fitted on them.”

We have previously reported on how railway infrastructure has been vandalized during the lockdown of 2020 which has disrupted many of PRASA’s operations including the local-to-local trains operation.

Makanda said PRASA intends to continue operating the Shosholoza Meyl service as it forms part of “PRASA’s primary mandate”. The service would “progressively resume” operations as infrastructure improves, but Makanda did not provide further details.

Previous:  More delays in case of 22 cops accused of murdering Regan Naidoo in 2018

It is absolutely heartbreaking to hear of the dilapidated state of PRASA's long-distance rail infrastructure. But there is another human aspect to this tragedy. PRASAis not only neglecting its physical infrastructure but its human resources as well. Here in Cape Town, more than 450 PRASA employees sit in limbo, unsure of what task they are trying to accomplish. Of these, more than 100 were hired specifically to work on the Shosholoza Meyl service, which has simply stopped running. They were told the service would resume this year but are now told that things might resume in May 2023. This not only means that the Shosholoza Meyl service will be unavailable over the festive season, but also that these workers will remain in limbo for more than half a year. These are hard-working people who truly wish to play their part in re-establishing quality rail service for all. Why can their managers not share their dedication?

In a country where the average working-class person is forced to devote a significant portion of their income toward transport, the total destruction of the country's low-cost, long-distance rail capacity is a complete betrayal of those who cannot afford more expensive options. Many have moved to the Western Cape in search of better opportunities and a higher standard of living, but have left behind friends and loved ones in other provinces. Rail is a cost-effective means of mobility for so many of our citizens – and one which is much more insulated from the fluctuations in fuel price over the last months. The writing is on the wall: South Africa needs this capability, but our national government is either unwilling or incapable of providing it.