From war in DRC to swimming the open ocean

He escaped conflict in the Democratic Republic of Congo (DRC) in 2012 and travelled 3,400km to Cape Town, an arduous journey that took several weeks. He was only 17 at the time, and came with his sister and two cousins, all of them under 20. This Saturday, almost five years after being granted asylum in South Africa, Arafat Gatabazi will embark on a 12km swim from Robben Island to Sea Point, raising funds for a creche in Khayelitsha.

“Children are the future of this country and deserve a safe learning environment,” says the 22 year-old, who completed a certificate in Information Technology in 2016 and now works as a web developer. “Education is so important.”

Located in Site B, the Imizamo Yethu Educare Centre operates from a single shack, serving some 45 children between the ages of five months and five years. The structure is cramped and leaks when it rains. Money from Gatabazi’s swim will go towards installing a fully equipped container classroom through the charity Breadline Africa.

Gatabazi learned to swim after taking lessons at The Homestead, a shelter for street children in Cape Town where he lived until 2015. Within a year he had completed his first Robben Island crossing, an astounding achievement by any standards. (His first attempt, a month earlier, ended when he got hypothermia a kilometer from the Blouberg coast.)

Since then Gatabazi has swum around Cape Point (approximately 8km) for the Little Fighters Cancer Trust and around Robben Island (a total of 13.5 km after strong currents altered his course) for Lifeline Western Cape.

“I want to show kids in children’s homes that they can achieve big things too,” he says.

To comply with open ocean swimming rules, male swimmers may only wear goggles, a cap, and a speedo — “not even trunks that cover your thighs,” adds Gatabazi, who was named Swimmer of the Year by the Cape Town Long Distance Swimming Association in 2014.

Water temperatures in Table Bay range from 10 to 15 degrees centigrade. “I’m hoping for 14 degrees this Saturday,” says Gatabazi, who will postpone his swim if conditions are not suitable. He anticipates that his swim will take 3.5 to four hours.

He took a break from training this week and flew to Durban to renew his asylum papers, a procedure he must repeat every six months. He has not returned to DRC since fleeing Goma, in the country’s troubled east, when armed rebels took over the city in 2012.

“I want to show that refugees don’t only come here to seek help,” he says. “There’s a lot of prejudice against refugees, but they can make a real difference in the communities where they’re living.”

If any readers are able to assist a small media team with a boat ride to Robben Island this Saturday, please contact Kimon de Greef: kimondg@gmail.com. (The boat carrying Arafat Gatabazi is full.) 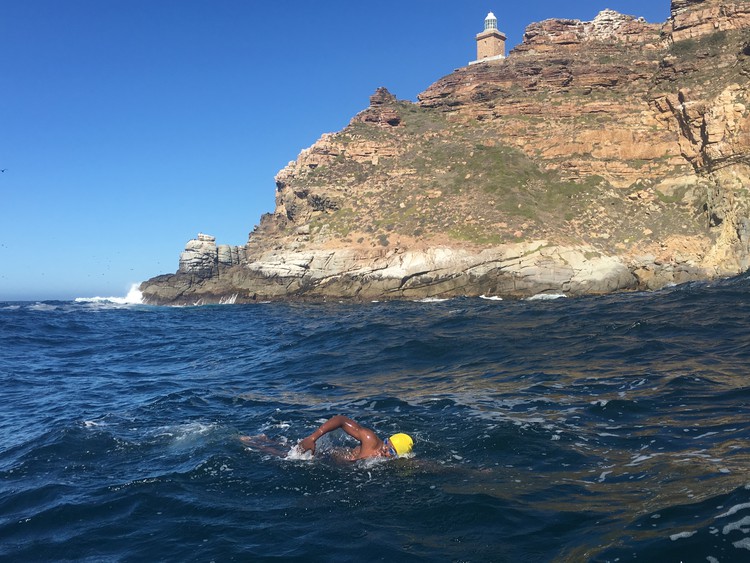