“We rely on dams and crocodile-infested rivers for water” 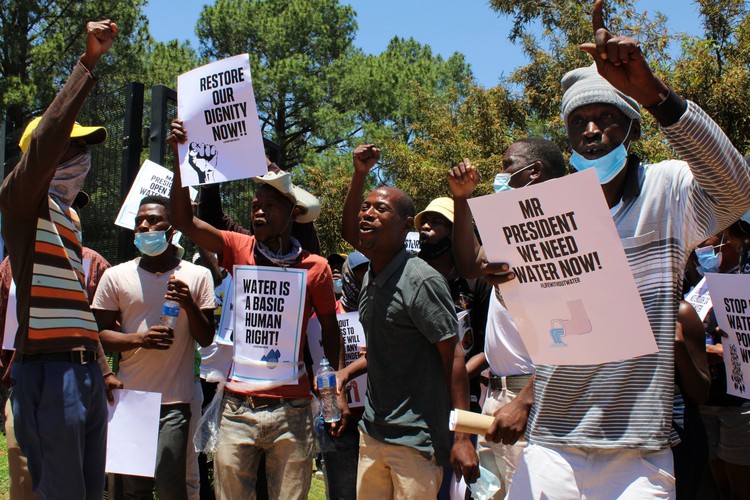 About 80 residents of five villages in Limpopo picketed outside the Union Buildings in Pretoria on Thursday. The residents said the 10,000 households in their villages have been experiencing erratic water supply since 2003. Photo: Masego Mafata

“We demand uninterrupted running water in our communities. We have been fighting for years and we will not stop,” says Limpopo resident Oupa Tshotshi.

The five villages under the Sekhukhune District Municipality are calling on the President to address water supply issues in their villages.

Butibuti Mabuso, who read out the memorandum, said they were tired of the municipality’s unresponsiveness. He said a petition would also be sent to the office of the President to intervene.

Their demands include that disciplinary action be taken against the Sekhukhune District Municipality for neglecting human rights issues, the establishment of a task team to investigate delays in addressing water supply, 24-hour water supply, and for the water affairs of the five villagers to be administered by the Ephraim Mogale Local Municipality.

According to Mabuso, an Elandskraal resident, their water woes began when Sekhukhune District Municipality took over the administration of their water affairs from the Ephraim Mogale local municipality in 2003. “We don’t have water [and] our police station and schools are constantly without water.”

Raymond Mokoena from Regae said, “We rely on dams and crocodile-infested rivers for water because nothing comes out of our taps.” Mokoena said he has to walk long distances to get to the dams and rivers in order to fill his nine litre container. This is not enough water for his nine-member family and they often run out of water by evening.

The villages, represented by the Centre for Applied Legal Studies (CALS), have secured five court orders against the municipality since 2015. Four of these orders directed the municipality to provide the communities with water. This was meant to be done through reticulated piping systems and plastic water tankers to be filled twice a week as an interim measure while a water treatment plant was constructed.

In August 2020 CALS, on behalf of the villagers, filed an application in the North Gauteng High court to order the arrest and detention of Sekhukhune’s acting municipal manager for “wilful contempt of court”. The application was dismissed by the court.

In his ruling, Judge David Fourie accepted the municipality’s argument that the construction of a water treatment plant was halted when lockdown was announced in March 2020 but had since resumed following the easing of restrictions.

The municipality also argued that trucks are servicing Jojo tanks in communities and most interruptions to water supply from the tanks have been due to theft.

But residents told GroundUp that the supply of potable water through the municipality’s reticulation system is not consistent and they sometimes go weeks without potable water. Some residents said they receive some water from Jojo tanks filled by the municipality, while others said the water in the tanks runs out before they can get some.

“Our children wake up early to fetch water. Even the schools don’t have water so they rely on the dams and rivers. Luckily the clinic has a borehole with some water,” said Alfios Matamane from Regae.

Shonisani Mudau, a representative from the office of the presidency, accepted the memorandum and promised to respond within two weeks.

“Municipality is trying by all means to fill the Jojo tanks but community members are using the water for activities other than drinking. So we are unable to meet the demand,” said Mahlahwane.

When asked why the municipality has not fully complied with the court’s order, he said, “It was difficult to comply with the order due to operational challenges, a lack of application of water conservation and water demand by the community.”

Previous:  Post office, SASSA office, library and community centre have all closed down in Madiba’s hometown