“We will hit them where it hurts” warns NEHAWU leader

Union vows to shut down government services, including SARS and SASSA 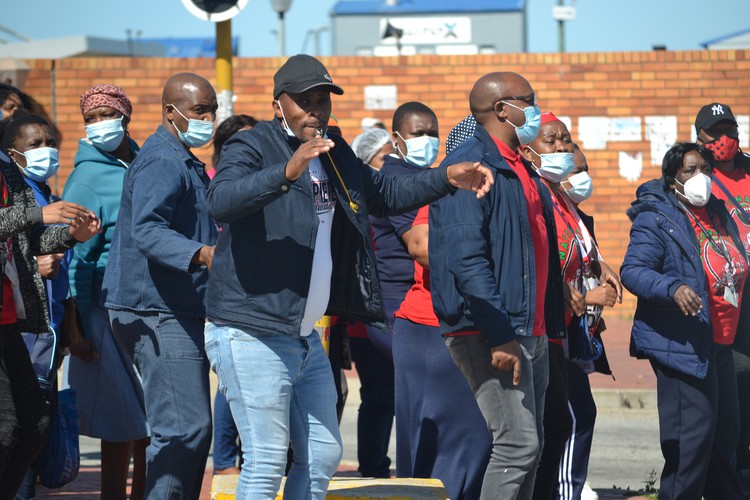 NEHAWU members picket outside Livingstone Hospital in Port Elizabeth on Monday ahead of the union’s national strike next month. Photo: Thamsanqa Mbovane

The group says the picket is in preparation for the national strike next month where thousands of members across various sectors have threatened to down tools to demand a 7% salary increase from government.

The union says government officials failed to adequately respond to their demands handed over to the premiers of the eight provinces and the office of the President following their national day of action on 3 September.

NEHAWU’s Busiswa Stokwe said: “We are happy that the government will announce moving to level one lockdown soon because most of our workers working home will be back to work. The salary issue is not affecting the health sector alone but also other public institutions.”

Stokwe said other state run entities such as SASSA, SARS and some tertiary institutions where NEHAWU has membership would also be impacted by their strike in early October.

“We take our mandate from workers because salary issues affect all who are employed by the government. There will be a total shutdown. We don’t want a strike that would drag unnecessarily … We want all government employees to be part of it,” she said.

“We will hit them where it hurts. When people go to SASSA or SARS next month there won’t be anyone to help them behind the counter. The government is our biggest enemy and they can’t tell us about Covid-19 because we know it first hand,” she said.

In a statement on Monday, NEHAWU said it again wrote to the Office of the President on 11 September “to remind him about the ultimatum” to strike. “Disappointingly, the President has only acknowledged the receipt of our letter and nothing about responding to our demands. We will continue with lunch hour demonstrations in all workplaces across provinces.”

Questions sent to the President’s office had not been answered by the time of publication.

Next:  Undertakers go on strike

Previous:  No arrests after deaf boy mauled by dogs