Doring Bay Abalone, 37% owned by the community, produces about 60 tonnes of abalone per year, mostly to legally export to China. 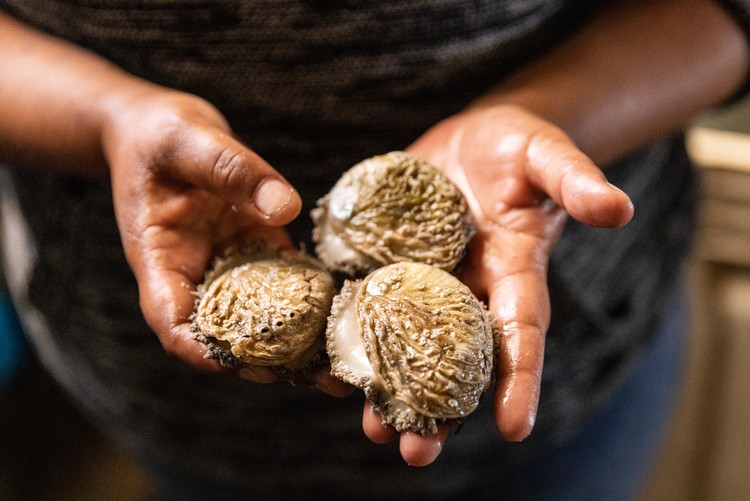 “If we protect what we have, eventually generations to come will benefit from it,” says Ruben Saul, chairperson of the Doringbaai Development Trust.

Saul is speaking to GroundUp about the Doring Bay Abalone farm based in the small West Coast fishing village, 40 kilometres north of Lamberts’ Bay.

The land-based farm extends along the harbour. The abalone, also known as “perlemoen”, are hatched and spawned in several old factory buildings. When we arrived, rows of tubs filled with more mature abalone were outside in the sun.

Nearly all the abalone hatched, spawned, and grown on the farm are exported to Hong Kong, China where it is highly valued and regarded as a delicacy. 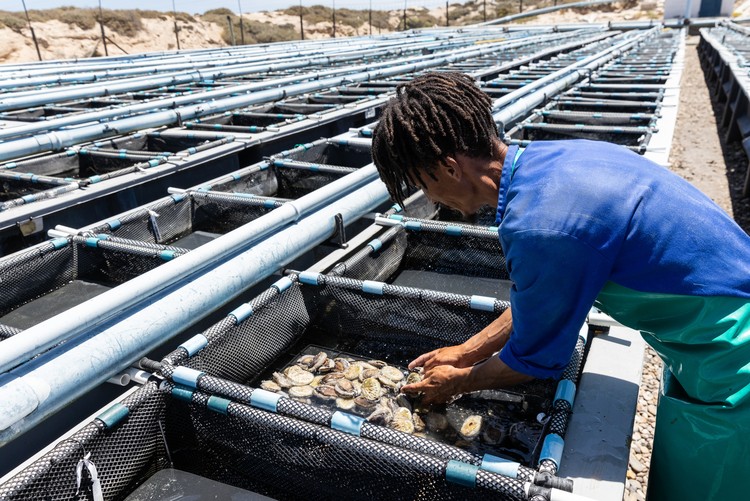 General worker Roderick Coetzee places the abalone into tubs to be weighed and graded. Nearly all the abalone grown on the farm is exported to Hong Kong, China.

Doring Bay Abalone is one of a few companies in South Africa that provide abalone to the Asian market legally. The species of abalone grown on the farm, Haliotis midae, is currently a critically endangered species due to rampant poaching.

A 2018 report from TRAFFIC, a United Kingdom-based conservation non-governmental organisation, estimated that between 2000 and 2016, almost 100 million abalone were illegally harvested from South African seas. The report noted that two-thirds of abalone imported from South Africa came via the illegal market.

A 2022 report by the Global Initiative, a Switzerland-based civil-society organisation, estimated that illegal harvesting currently exceeds 3,000 tonnes per year. The report notes that there is a “fast-growing abalone aquaculture sector, producing close to 2,000 tonnes of abalone annually”, much smaller than the illicit market.

While the Doring Bay Abalone fosters sustainability of the critically endangered species, the production of 60 tonnes of abalone per year is just a drop in the ocean.

When the farm opened in 2013, it had eight workers. Now it employs over 50 local people. 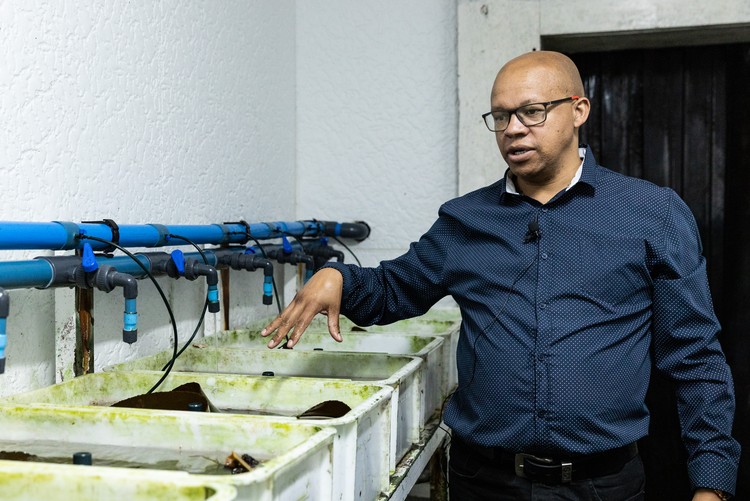 Ruben Saul, chairperson of the Doringbaai Development Trust, says there are plans to expand the farm and create more job opportunities for locals. Photo: Liezl Human

Unlike other commercial aquaculture farms, the community has a 37% shareholding stake in the Doring Bay farm, held in the Doringbaai Development Trust. The rest is privately owned.

The trust was established after the old Oceana crayfish factory closed down in 2006 after about 75 years of operation. This was devastating for the community as it left many people without jobs, says Saul. The trust was set up in 2007 to help the community cope with the closure.

Saul said that hundreds of people from the small fishing community have benefitted from the opportunities created since this project’s inception.

According to Anchen Frisley, a supervisor and worker at the farm for almost five years, most people in Doringbaai make a living as fishers, in the abalone industry or at mines nearby.

Though Frisley spends most of the day grading abalone by size and the quality of its shell, she has never tasted it. “I haven’t eaten [abalone] and I don’t want to because I work with it every day,” she says jokingly.

Frisley explains that the market size of abalone ranges between 100 and 250 grams. Dried abalone is the preferred method of preserving it for export, but it can also be frozen, canned, or exported live.

Saul says there are plans to expand the farm to produce an additional 30 tonnes. This, he estimates, will create 20 more permanent jobs. Saul says that this expansion will cost about R8-million. 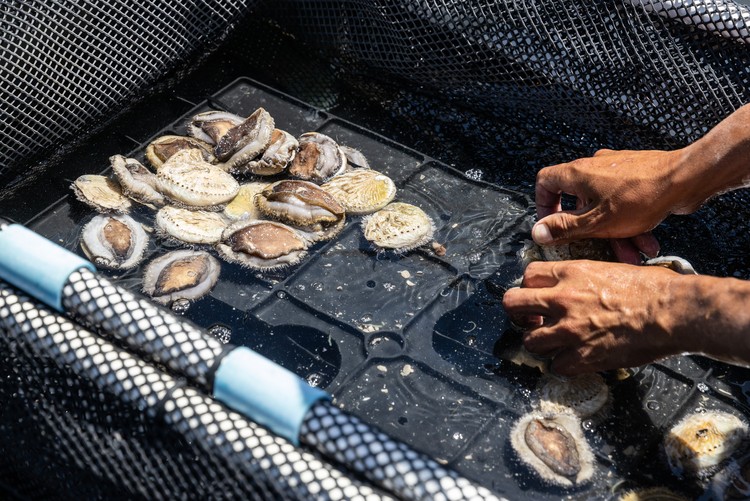 Workers sorting the perlemoen. Most is exported to Hong Kong, China, where it is highly valued and regarded a delicacy.

Next:  Sex work: where criminal law has no place