You chose electricity and toilets instead of houses, families told 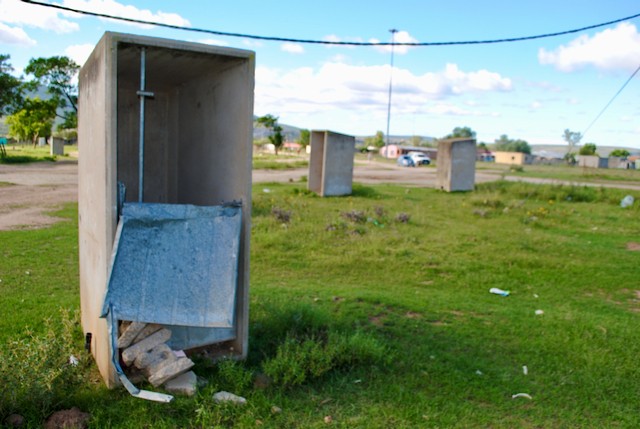 Toilets have been standing since 1993 without houses in the Hillside RDP project in Fort Beaufort, Eastern Cape. Photo: Mkhuseli Sizani

About 600 housing beneficiaries say they have been waiting for RDP houses promised to them in 1993 for Phase 1 of the Hillside Project in Fort Beaufort, Eastern Cape.

Meanwhile, the Phase 1 residents have sat and watched RDP houses being built in phases 2 and 3, although many of these houses had to be demolished later and “rectified”, a process which itself has stalled, leaving people back in shacks.

Initially, residents in phase 1 were offered subsidies of R15,000 to build houses. As this was insufficient for most people to build a liveable house, the offer was rejected. The municipality then said it would use the money for infrastructure – streetlights, roads and water. It also built dozens of standalone toilets

Although some of the beneficiaries have managed to build brick houses at heir own cost, many live in dilapidated mud houses. Others abandoned their “toilet sites” and went back to their villages.

Zwelakhe Stofile, chairperson of the South African National Civic Organisation (SANCO) in ward 20, who is also a Phase 1 beneficiary, said that when the R15,000 subsidy was rejected, officials called an urgent meeting and “forced the beneficiaries” to accept vouchers for the local hardware store for R2,000.

Former ward councillor Zwelithini Mpembeni (ANC) says they were told the vouchers were “change” from the R15,000 subsidies, as the officials said R13,000 of each subsidy would go to the installation of the street lights, gravel roads, electricity, water and sanitation. He says that decision was bad and has left many people without houses.

“We accepted their offer in fear of losing the vouchers,” says Nobendiba Tshakweni, who is 70. “Throughout that period the local leaders had drinking sprees and braais all over the location.”

“The officials quickly forced us to accept the R2,000 vouchers … They said if we don’t accept the vouchers we won’t get ‘the change’ again.”

Tshakweni says she went to the provincial human settlements’ department offices in Bhisho with other beneficiaries to find out about their RDP houses, only to be told “that we chose electricity and toilets over RDPs”.

“We told the officials that we never said we don’t want the houses,” said Tshakweni. “We were just concerned by the R15,000 subsidies; we felt that the amount was too small to build a proper house.”

According to Stofile, many people used the vouchers then sold the materials for cash. Some converted their toilets into storerooms. Most toilets were abandoned and left to be vandalised.

“In some of the houses there are two or three toilets in a yard,” said Stofile. “This project was overwhelmed by fraud and corruption. How can one RDP site have three or four toilets?”

“We have title deeds for these toilets that don’t have water. We are no longer qualifying for houses again, because the housing officials robbed us. Our roads are still impassable and all those streetlights were removed by the municipality, claiming that we were using too much electricity,” said Stofile.

Mast lights replaced the streetlights. Meanwhile, taps dried up six years ago, according to Stofile.

Violet Keke, who was 53 when the project started, is now 82 and still stuck in a dilapidated three-room mud house which she shares with five siblings.

Keke uses a wheelchair. “I want an RDP house that is suitable for my condition. A mud house always needs to be maintained, because heavy rains damage it, and it is cold. The toilet that this government built for me is outside. I relieve myself in a bucket, then ask my family members to empty it in the bushes because we have no water to flush the toilets. But that is not nice because I have become a burden to them,” she said.

Eastern Cape Department of Human Settlements spokesperson Yanga Funani said, “During that period, it was the municipal responsibility to build RDPs.”

Raymond Mhlaba Local Municipality spokesperson Sivenkosi Mtiya said, “We have no records of that project in our offices because at that time the municipality was Nkonkobe Local Municipality. But we are aware that the residents chose the street lights and toilets over the RDP houses.”

Next:  Thousands of farm workers face eviction with the end of the National State of Disaster, activists warn

Sex workers are angry with the Gender Commission. Here’s why