Covid-19: How a Cape Town project saved many lives

By getting high-risk people into care immediately, even if they are not feeling ill, many deaths can be prevented 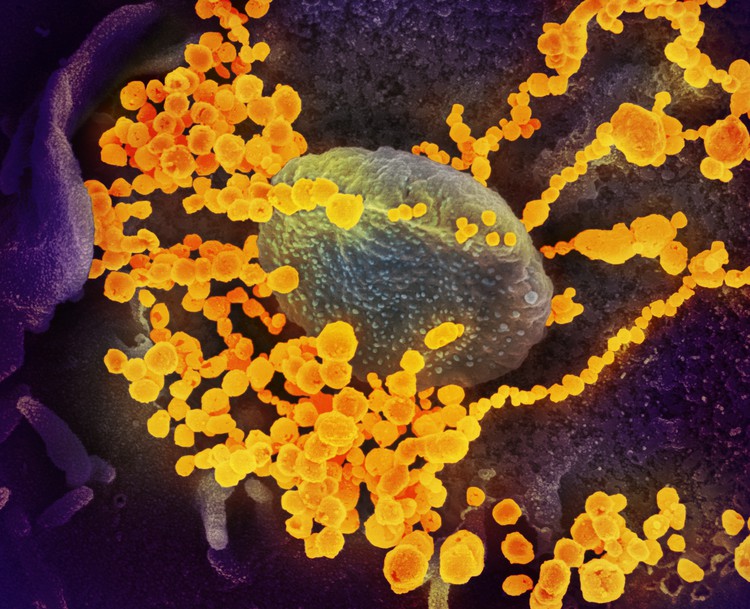 This electron microscope image shows SARS-CoV-2 (round gold objects) emerging from the surface of cells cultured in a lab. Image: NIAID-RML (CC BY 2.0)

At the height of the Covid-19 outbreak in the Western Cape, a project was implemented that saved lives, and has the potential to save many more.

As the epidemic escalated, it became clear that the disease was hitting people with diabetes especially hard. A study looking at over 15,000 Covid-19 infections showed that of every 100 deaths in the Western Cape, 52 were in patients with diabetes. Diabetes was a more significant risk factor than all other comorbidities combined.

Within the diabetic population elderly diabetics and those with kidney disease had the poorest outcomes of all. The mortality rate in this sub-group was almost 30%.

This was why the provincial health department decided to try a novel approach. The department has access to a central database that captures the medical history of all patients who are treated within the public sector, as well as all positive Sars-CoV-2 laboratory tests performed in any Western Cape facility, both public and private. This made it possible to see from day-to-day whether there were patients who had been diagnosed with Covid-19 who fell into this extremely high-risk cohort and had not yet been hospitalised. Since we knew one in three of these patients was likely to die, we decided to take action to improve their outcomes.

A large study in China showed that improved glycaemic (glucose level) control, even over the short term of the illness, improves the outcome in diabetic patients. Also, we were seeing how improved treatment, including providing oxygen to patients, was improving the prognosis in patients whose lungs are affected.

Unfortunately, many of these patients were being admitted to hospitals at a point in their downward spiral where either mechanical ventilation was required or only palliative care could be provided. At this point the outcome was usually very poor, with 40% of people in this group dying once admitted to hospital.

We set up a team called VECTOR (Virtual Emergency Care Tactical Operation) on 17 July. Six doctors were recruited. Their job was to perform telemedicine (by telephone or other electronic means) consultations with patients diagnosed with Covid-19 in the highest risk groups.

In effect the highest risk patients were called by the VECTOR team and offered admission to an Intermediate Care facility even if they were not clinically ill. If they declined admission initially, they were followed up daily.

Their condition could change dramatically within a matter of hours. When in a facility they could be provided with care that may be difficult to provide at home – continuous oxygen, tight glycaemic control, and rapid escalation to higher levels of care if necessary. Our Intermediate Care facilities — the Hospitals of Hope: Cape Town International Convention Centre, Brackengate, and the Sonstraal facility in Paarl — have fortunately been able to offer beds for these patients. The results have been very promising.

Prior to this intervention, out of 2,558 patients meeting the high-risk criteria, 718 died (28%). After the intervention was introduced, looking at data up to 14 August 2020 (one month of activity), out of 379 patients who have been allocated to the VECTOR team, only 17 died. That’s a mortality rate of 4.5%.

Sadly, there are many patients who the VECTOR team is unable to contact, or who died before they were contacted, but even when these factors are considered, the total mortality rate amongst this high-risk group is still reduced, with a total of 117 deaths out of 592 patients, about 20%.

The project has subsequently been extended into rural areas. The team is also supporting the provincial call-centre so that diabetics can be screened for any evidence of deterioration.

As the first formal telemedicine initiative that the provincial health department has undertaken, early indications suggest that the VECTOR team has made a positive impact for a highly vulnerable group of patients. This initiative suggests that telemedicine has a valuable future role in the public healthcare system.

David is a family physician in the public sector helping to coordinate components of the response to the Covid-19 pandemic in the Western Cape.

Next:  Victory for housing activists in landmark Tafelberg case