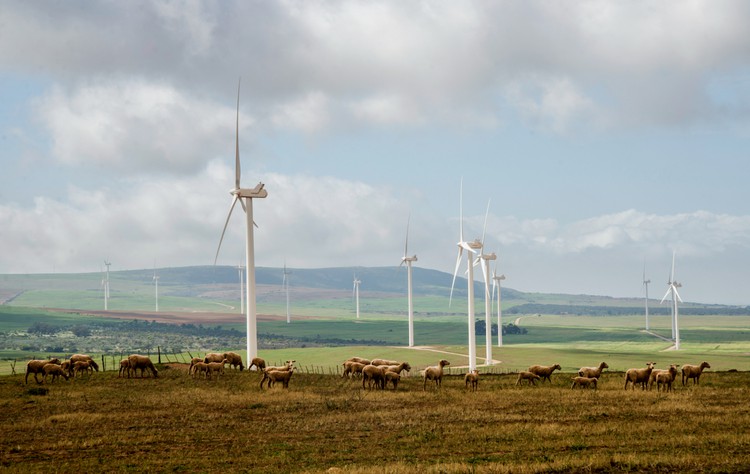 The West Coast One wind farm near Vredenburg has operated since 2015. Environment minister Barbara Creecy says the wake effect on this facility of a proposed new neighbouring wind farm must be investigated before it can also be approved. Photo: John Yeld

It is back to the drawing board for a giant new wind farm project on the West Coast, following an appeal decision by environment minister Barbara Creecy.

Although Creecy dismissed 15 of the 16 appeals against the go-ahead for the 140-megawatt Boulders wind farm, she crucially upheld one appeal and set aside the environmental authorisation that her Department of Environment, Forestry and Fisheries (DEFF) had issued for this project on 14 January.

The successful appeal was lodged by Aurora Wind Power which has operated its 47-turbine, 94MW West Coast One wind farm on a property adjoining the planned Boulders site.

Both projects are on farmland close to Paternoster, Britannia Bay, St Helena Bay and Vredenburg.

Aurora’s successful appeal related to its concerns about the physical phenomenon known as the “wake effect” on its facility. Because the Boulders project proposed constructing its huge 165m high turbines immediately upwind of West Coast One’s slightly smaller 135m turbines, Aurora argued that its access to the wind resource (at West Coast One) would be reduced by the wake effect. This would in turn cause “significant” revenue losses, estimated at millions, possibly even hundreds of millions, of rands over the 20-year contract with Eskom, it claimed.

In her appeal decision announced last week, Creecy said she had “carefully considered” all the information about the proposed new wind farm. She agreed with Aurora’s argument and upheld its appeal, setting aside the environmental authorisation for Boulders.

The first is that it must commission an impact assessment report of the Boulders’ wake effect on West Coast One, and then subject this report to a public participation process in terms of environmental regulations. This means that the public – “interested and affected parties” who include all the unsuccessful appellants – will be able to read and comment on the report.

Secondly, any comments, and any responses to these comments by the developer, must be incorporated into a final Environmental Impact Assessment Report that will be submitted to the department for re-consideration of the Boulders project approval.

Creecy stated in her appeal decision: “The impacts on [wind] turbines caused by wake effect, including material fatigue, are widely known and is an accepted impact … a wake assessment is required for the proposed Boulders wind energy facility … This ground of appeal is good in law, hence it is upheld accordingly.”

Although Creecy only directed the Boulders developer to conduct a wake impact assessment and subject this to a public participation process, the fact that she set aside the environmental authorisation (EA) for the project means that if a new decision is issued by her department, this will again be subject to appeal on all grounds – not just on the wake effect impact.

This was confirmed by a spokesperson for the department.

The 15 unsuccessful appeals against the Boulders project were submitted by individuals, local residents, residents’ associations and conservation groups.

Their objections were summarised by the department for consideration by Creecy into 11 categories. These allegations were:

These appeals were all dismissed by Creecy, who found that they were either unfounded and/or that the alleged issues had been properly assessed and/or that impacts could be satisfactorily and appropriately mitigated. Although some impacts (like the visual impact) were high, none constituted a “fatal flaw” for the planned wind farm, she ruled.