Department of Justice says its working to resolve 129 outstanding payments 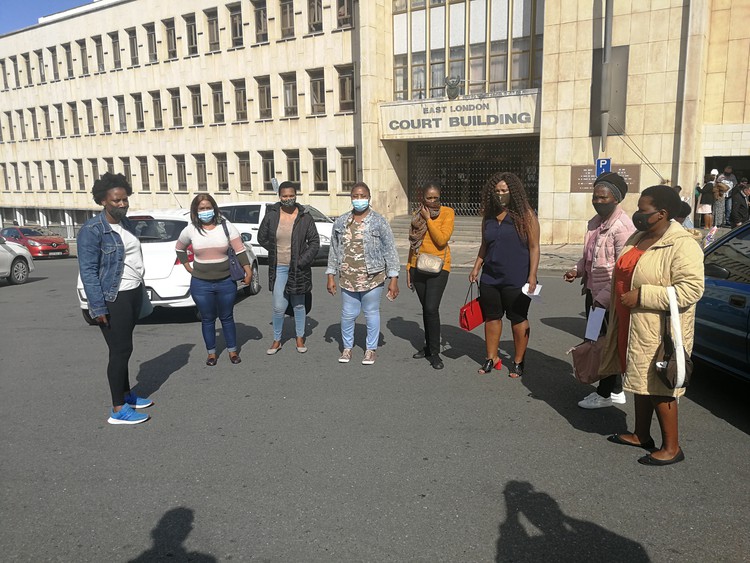 Members of the organisation Child Maintenance Difficulties in South Africa outside the court in East London where they handed over a memorandum to justice department officials last week. Photo: Johnnie Isaac

The Department of Justice says a computer system crash is to blame for thousands of beneficiaries not getting their much-needed maintenance payments during the lockdown. This happened when the department migrated from a system called JDAS to a new one called MojaPay.

Many parents or (legal guardians) are required to pay maintenance until a child is self-supporting, for example following a divorce. The court, which is usually the nearest magistrates’ court, determines how much a child needs. If maintenance is not paid, the court can issue a garnishee order to get the money from the maintenance payer’s salary. These payments are processed through the Department of Justice.

Last week, members of an organisation called Child Maintenance Difficulties in South Africa (CMDSA) handed over a memorandum of grievances to the Eastern Cape Department of Justice. One demand was for single mothers to be paid funds owed to them through the department.

There were several single mothers in the protest. Andiswa Tsewu said her children have been hungry for four months while she has been sent from pillar-to-post by officials. Vuyakazi Roloma said she has not received her maintenance payments since the end of March. “We have encountered a lot of problems in the East London Magistrates Court. We were told the payment system had changed and crashed, losing our information. We learnt about this after we had to come here physically. There was no communication and when we enquired over the phone, we received inconsistent messages from the officials of Child Maintenance Court,” she said.

Single mother to an 11-year-old son, Akhona Ngambu, was the only person among the group to have received payment following the IT crash. She described how she had to hound government departments in order to get her payments paid directly into her account.

Felicity Guest, founder of CMDSA, said problems began when the Department of Justice procured the MojaPay system. She said issues with the system were made worse by inefficiencies of the court such as poorly trained staff and a lack of understanding of the impact this has on mothers and their children.

“The National Coronavirus Command Centre said Child Maintenance courts will remain open during level five because it’s a critical service, but courts do not take these matters very seriously. With the garnishee orders, we know the money is there, it is just not being paid to the beneficiaries by the people meant to protect our rights,” she said.

The Department of Justice said it’s aware of the problems and that Deputy Minister John Jeffrey had visited the East London office recently to be briefed.

Spokesperson Chrispin Phiri said beneficiaries would be paid their outstanding money. “The problems with maintenance was isolated to seven out of 82 courts in the Eastern Cape in particular. This was occasioned by changes in the system from JDAS to MojaPay. The department has roped in the Council for Scientific and Industrial Research to assist.”

Previous:  Over five million children are not getting their school meals