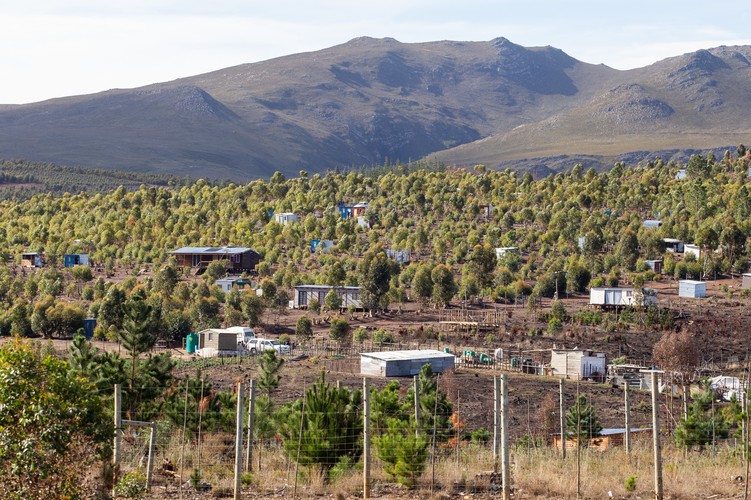 First occupied in November 2020 in order to establish a self-sustaining “sovereign Khoisan community”, Knoflokskraal near Grabouw in the Western Cape is home to thousands of people.

Nestled between pine and eucalyptus trees in the Elgin Valley near Grabouw is a community of several thousand people who call this area now known as Knoflokskraal home.

In November 2020, seven people occupied the land to establish a self-sustaining “sovereign Khoisan community”. Since then, the occupation of rural farm land has grown.

“If you can have Orania, then you can also have Knoflokskraal,” said community leader Richard Isaacs. (Orania is a de facto white Afrikaner-only town in the Northern Cape.)

Households at Knoflokskraal have large plots and are spread across 1,800 hectares. Most of the brightly-coloured homes are informal structures made of wood, zinc sheets and other material. There is no electricity or running water.

The entrance to one area within the settlement has a sign that reads: “Khoi-munity”.

One of the informal homes at Knoflokskraal nestled between trees which were damaged in a recent fire that destroyed many houses in the community.

Resident Aubrey Wentzel said that when people, who are mostly from urban communities, first come to settle at Knoflokskraal, there can be “teething problems”. Over time people learn to use candles, install a gas stove and after some time install solar power, he said.

“The economy of this country is suffering so we decided that our people should look if they can become self-sustained … The actual goal is to have a better life going forward. I believe it will happen,” said Wentzel.

Isaacs told GroundUp that their aim is not to “create an informal settlement” but to build a community in which people uplift one another. Many residents of Knoflokskraal come from areas on the Cape Flats where gangsterism, shootings, and drug use are rife.

“We want to get people here to teach them to farm and look after the land themselves so we are not dependent on the state,” Isaacs said. “We want them to know that the Khoisan people know where they come from.” 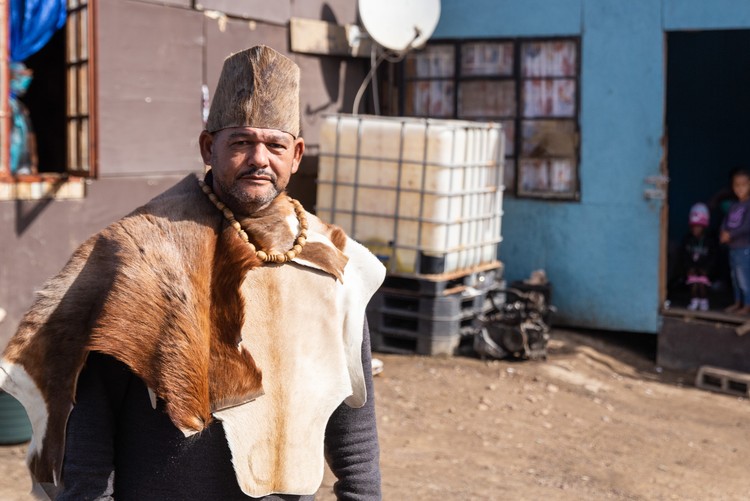 Community leader Richard Isaacs was among the first seven people who moved onto the land in 2020.

Isaacs said they also want title deeds to be given to residents at Knoflokskraal.

He said that in the future they want to build a school, business centre, and a sportsfield. They are also considering setting up a “bundu-court” where Khoisan laws would be implemented.

Next week, the department is heading to the High Court to obtain an order to evict the occupiers because the land is earmarked for forestation.

DFFE spokesperson Albi Modise told GroundUp that the department is consulting its legal team to start the eviction process. “Illegal land invasions cannot be tolerated, as they result in large scale damage to forestry land intended to be utilised to the benefit of all South Africans,” said Modise.

He said that the court orders would allow the department to remove unoccupied structures. The property is now guarded around the clock by security guards. 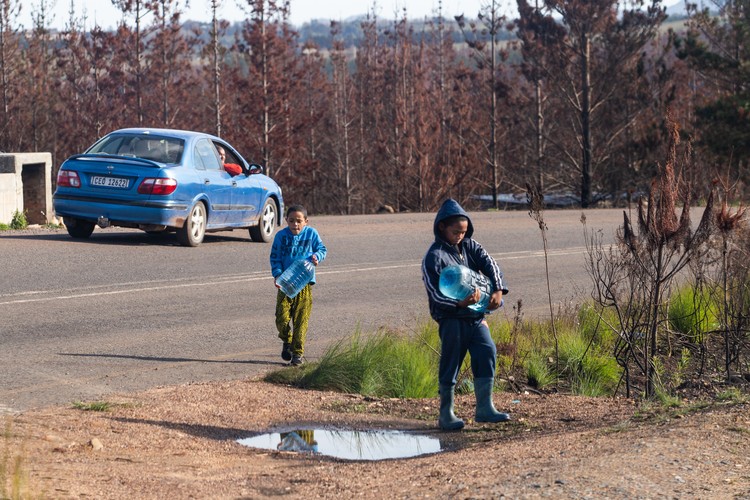 There is no electricity or running water at most of the homes so residents rely on collecting water from a nearby borehole daily.

According to Flippie Ruiters, one of Knoflokskraal’s first occupants, some homes have already been demolished and removed by police over the past few months.

This followed earlier court orders obtained by the DFFE and DPW. There is also a court interdict that prevents any additional structures from being built on the plot where Flippie and his family have settled. 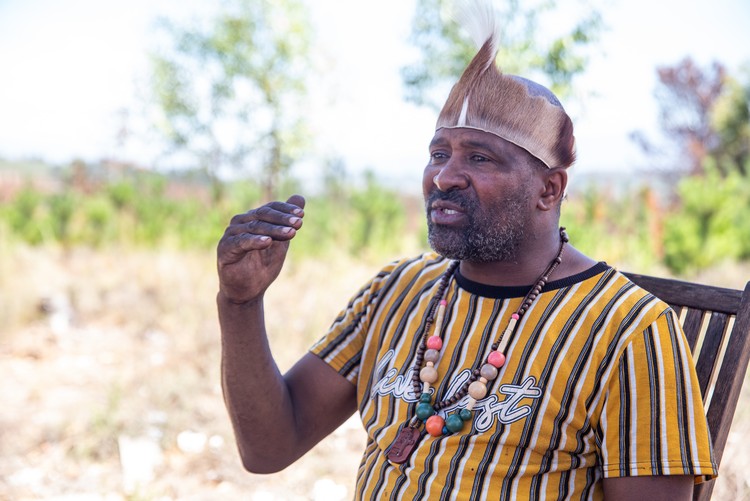 Resident Flippie Ruiters grew up and lived in Mitchells Plain before moving to Knoflokskraal. He believes that the residents have a right to move onto the land near Grabouw.

Sanelle Kleinsmith, who has lived at Knoflokskraal for just over a year, said that she feels at home there, and that she is “following in the footsteps of her ancestors”.

Ruiters said the occupation is on the basis of the United Nations Declaration on the Rights of Indigenous Peoples, and the Traditional and Khoi-San Leadership Act, which was signed by the president at the end of 2019. 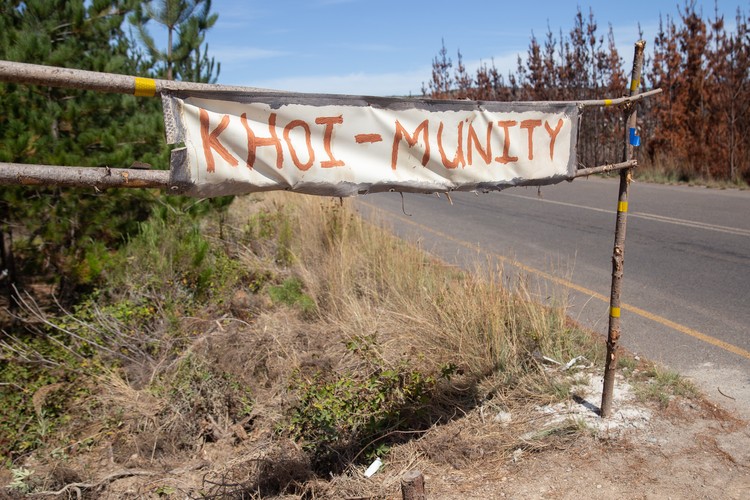 Next:  Education department told court that learners would be in school this week. It hasn’t happened

Previous:  Middelburg woman must get R540,000 from the Minister of Police, court rules

Respect to the people of Knoflokskraal for your courage and determination. At a time when government infrastructure is crumbling around us, you choose to create a self-sustaining community and take responsibility for yourselves. This is the way forward to a better future for all. You are a beacon of hope. May your court case resolve in your favour and may your community thrive.

Thank you for informing us of the absolute opportunistic disgrace taking place, under the hospice of Khoi reclaiming ground. Hogwash. The facts would show that it is no more than a land claim where people paid someone for illegal plots that were not transferred to be bought, nor rezoned, nor in line with any orderly town plan or road and engineering compulsory input.

I love my Khoi people!

So glad to see this happening. I'm praying you get your idea right and succeed so that I can come to my people and live the life I should have since birth, the Khoisan way.